Our banding efforts resumed this February with our Northern Pygmy-owl project (also documented in the 02/13/15 Field Note).

2/3/15: Eric Rasmussen and I catch the long sought-after male pygmy-owl that defends a territory around West Baldy Ridge. We attach a small VHF transmitter to its back (#960) before letting it go. The owl flies to a nearby perch and we confirm that the transmitter antenna is placed correctly (red arrow below points to the antenna). 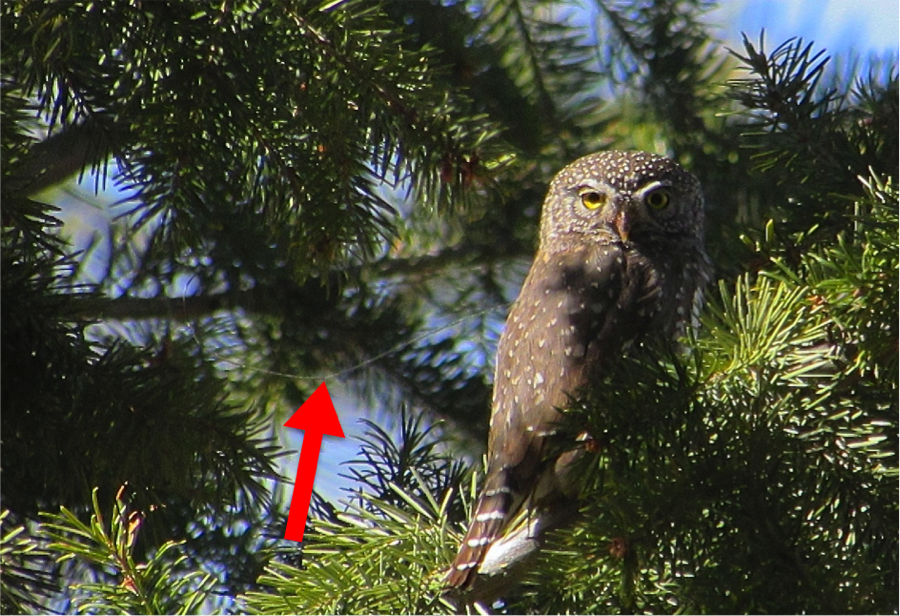 2/3/15 – 2/24/15: I monitor #960 every three days and keep finding him in the same area. Our hope that this owl will breed here grows every day. Within a few days it becomes evident that this owl occupies a general territory near West Baldy Ridge. 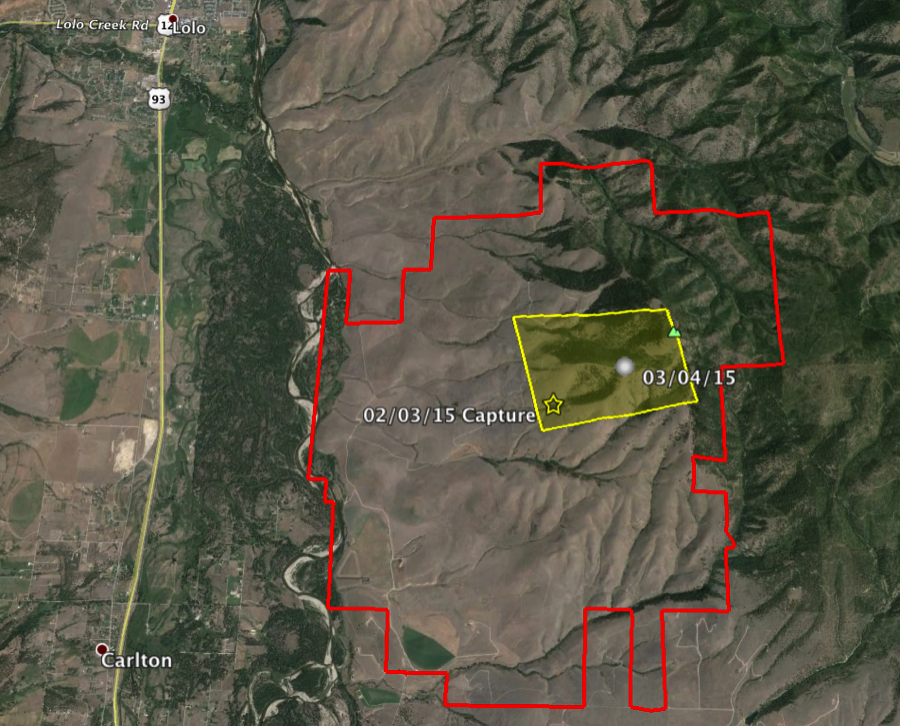 3/4/15: After hiking for a couple hours from Sheep Camp and up to the top of West Baldy ridge, I find #960 (red arrow in the photo below) at 8:00am with what I believe to be his mate! The male vocalizes more and has a deeper hoot in contrast to the softer and higher-pitched female. 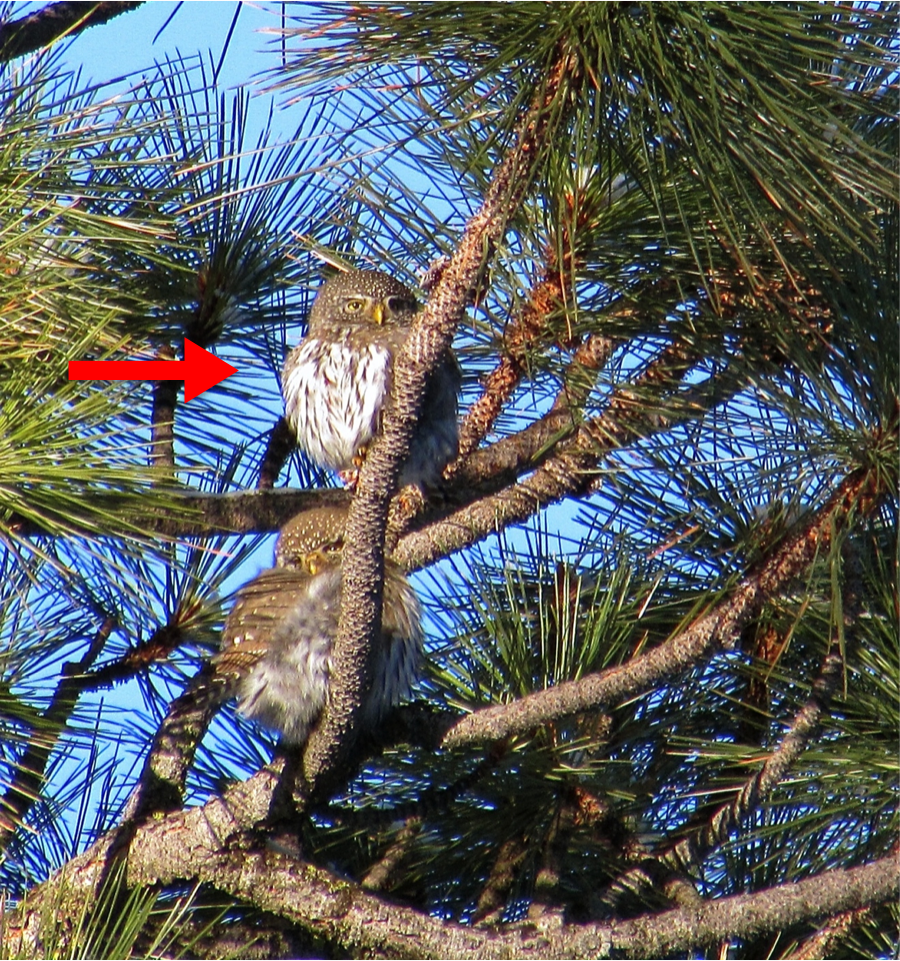 Snow still blankets the upper portion of West Baldy Ridge. This picture shows the scenery at the site when looking out to the northwest. 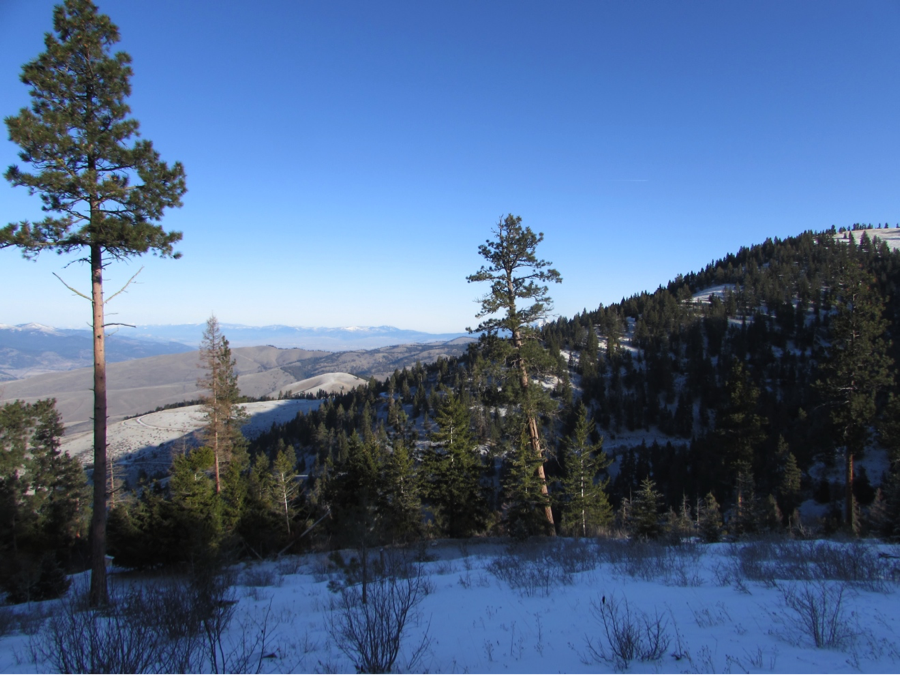 3/6/15: I do not visually confirm the owl. We triangulate #960’s position to an area in its typical home range, on the north-facing slope of West Baldy.

3/9/15: Today #960 is back at the road junction and is eating a beheaded vole. The pygmy-owl moves very little during 5 hours of observation, and then it decides to nap and soak in the afternoon sun with the vole still in its talons. I find no female around. 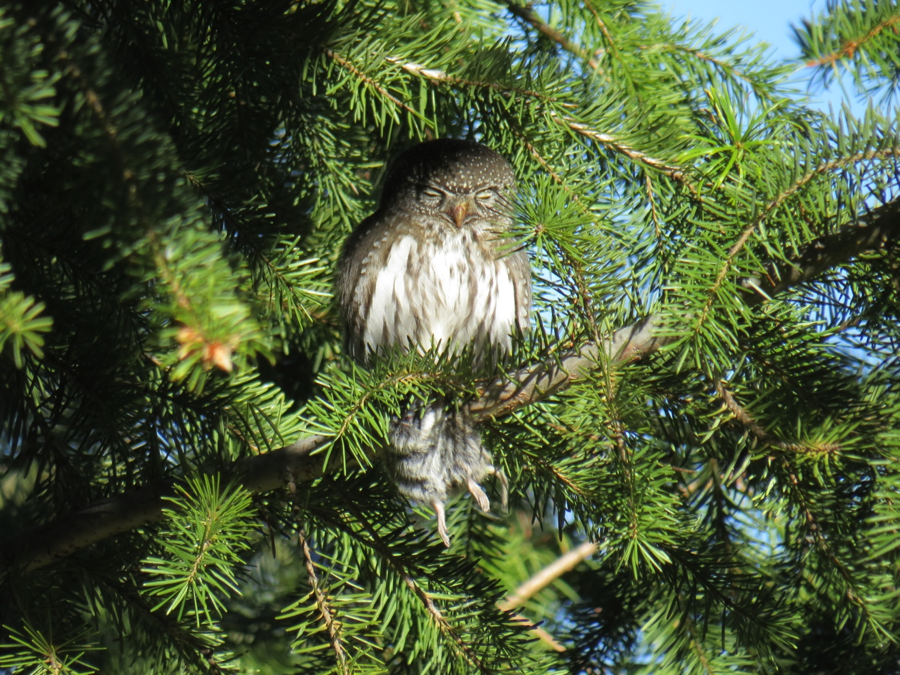 3/10/15: We decide to step up the challenge to tracking #960 over several hours between dusk and dawn. At 7:30pm, I record a burst of activity: the male kills a vole, starts pecking at it, but then takes off and flies up the draw. Honing on the transmitter signals, I finally catch up to it before 8:00pm despite the failing light. #960 choses to roost in mistletoe-infested Douglas-firs for the night. It hoots a couple of times until 8:05pm before it falls silent and lets Long-eared Owls and Great-horned Owls take over the hooting symphony. 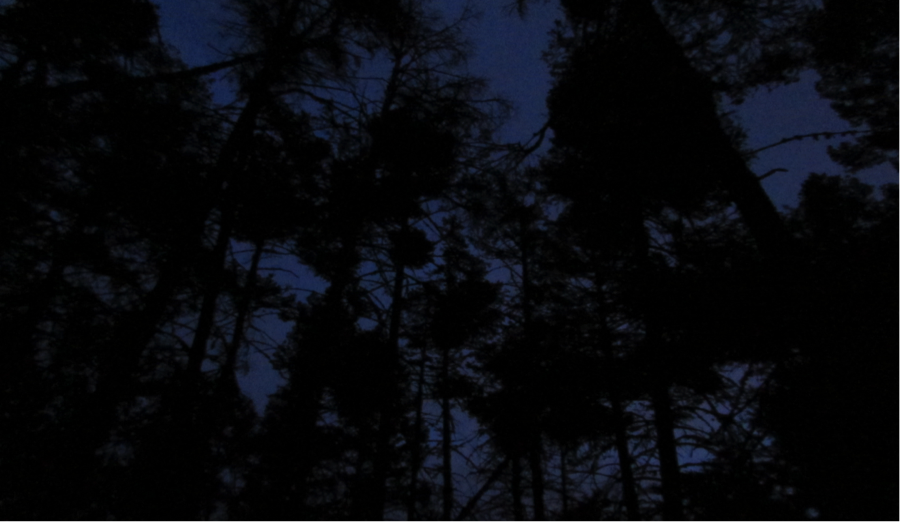 3/11/15: Early in the morning we find the owl at the same roost. At 7:30 am, #960 moves approximately 40 meters and gives a few hoots. He then flies straight up the draw to meet with his mate. I hear them interact for over 20 minutes with mixed vocalizations. As soon as I reach the pair, the male shoots back down to the road junction, where we have found it hunting voles for the last two days. 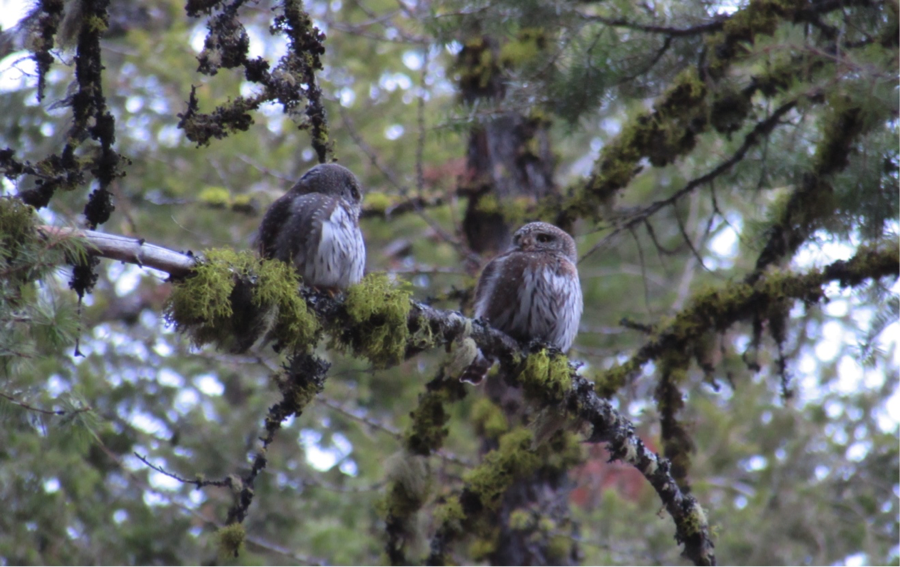 The male leaves the female at 8:20am. The female stays near a suspected nesting site for 10 minutes before disappearing into the forest. The Ponderosa Pine snag visible in this picture contains numerous cavities suitable for a pygmy-owl nest. 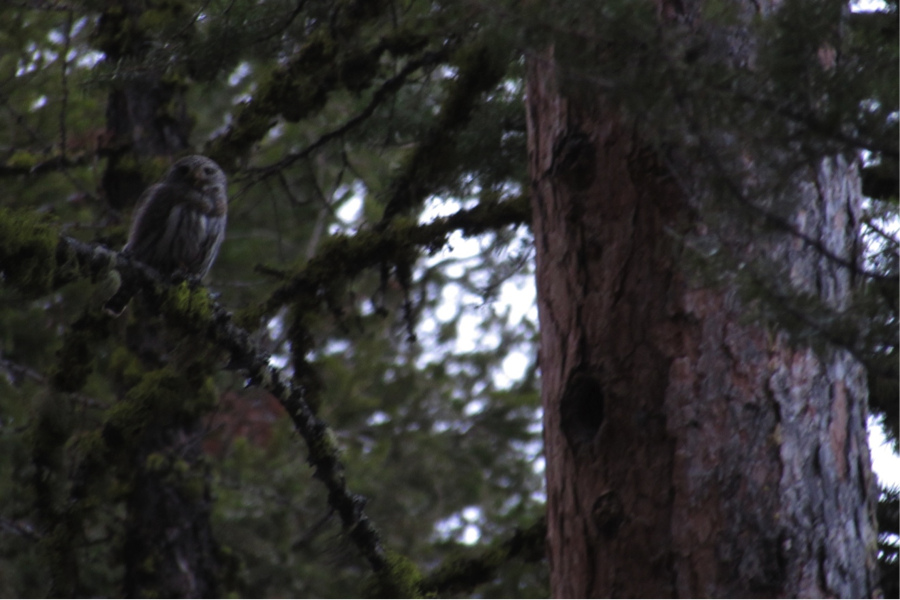 3/11/15: Tracking the male #960 over several hours enables us to better understand a pygmy-owl’s behavior and movement. Here is a map of the owl’s movement and suspected nesting site on 3/11/15 with a reference to where we initially captured it. The distance between its potential nesting site and where I find it at 9:15am, where it hunts voles, is approximately 750 meters apart (1/2 mile). 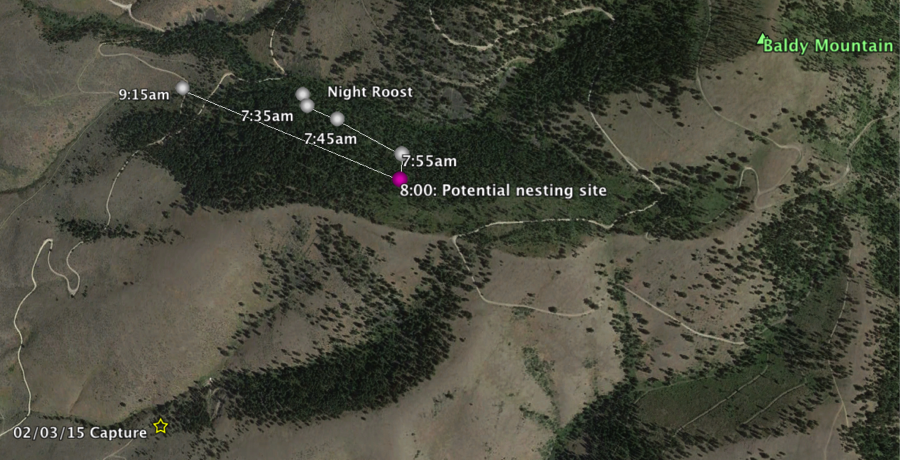 Summary: Our tracking efforts give us a glimpse into the size of its home range. #960 has been located over a range surpassing 165 acres thus far. 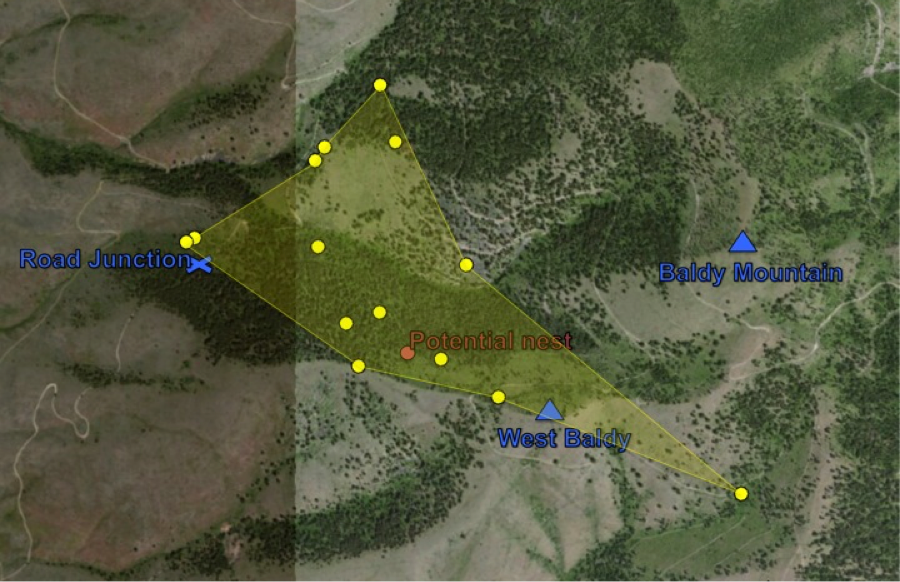