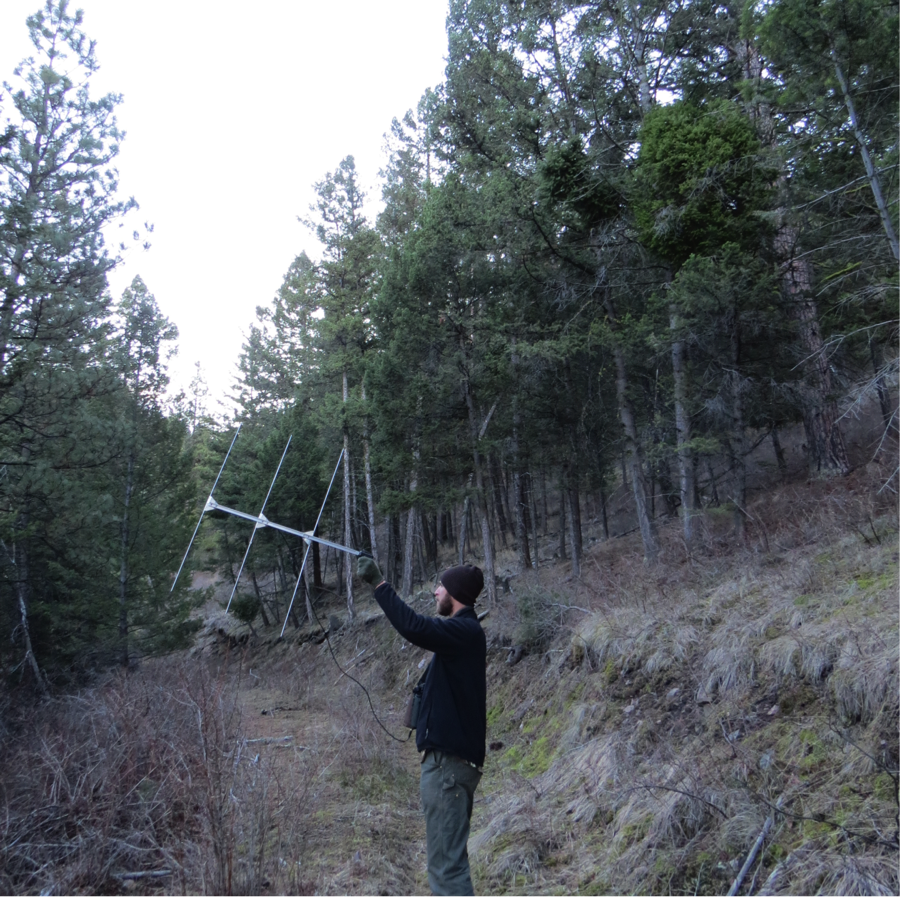 03/16/15: It takes me a while to find #960 today. The male is hunting and flying around the forest. I get close to its signal twice at 2:00 pm and 2:20 pm, but it flies away. Finally at 2:38 pm I visually confirm that #960 is hunting. It is atop a Douglas-fir, bobbing its head. This bobbing behavior helps pygmy-owls obtain an accurate location of and distance to their prey. 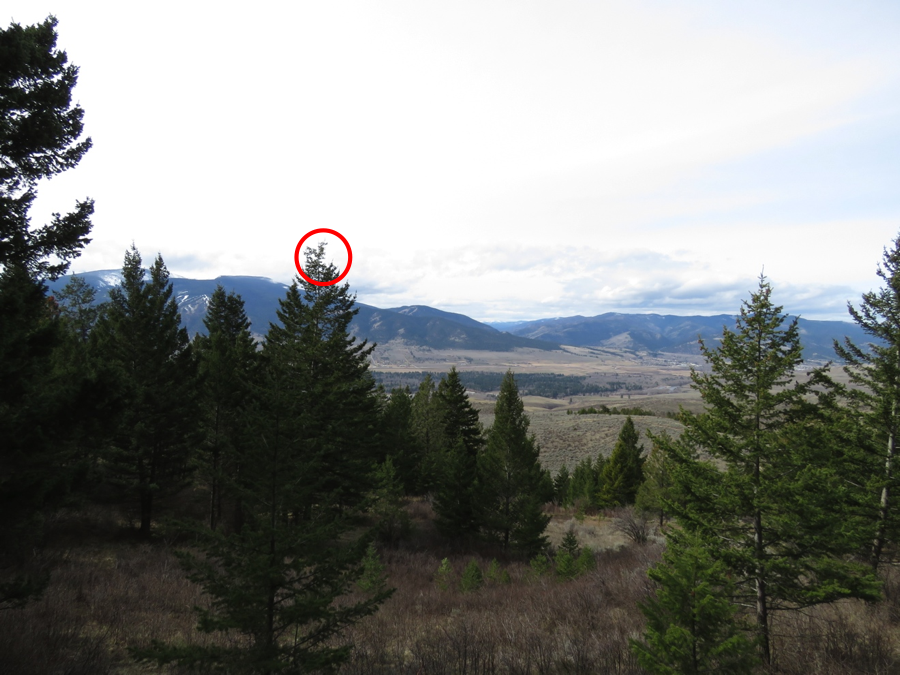 The male stays in this fir for 30 minutes until it flies to a different perch. To limit disturbance, I decide to stop tracking and leave it to continue hunting. 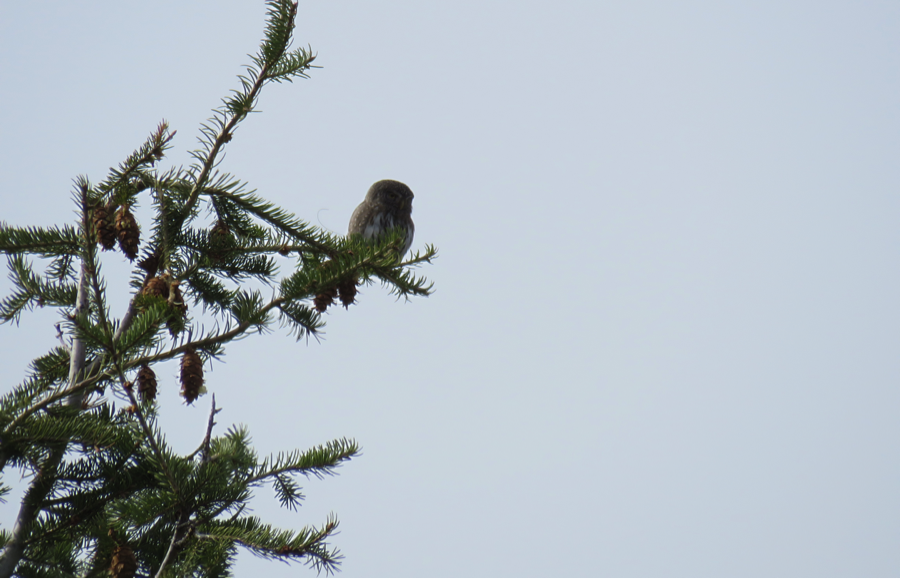 3/18/15: Back at it on Wednesday; at 1:10 pm Kate and I find #960 near the road junction, where we’ve seen it foraging multiple times. It sits in a Douglas-fir, with a vole in its talons. Then we drive up to the top of the mountain where I show Kate the location of the suspected nest tree. During our visit we see a Williamson’s Sapsucker, the first reported in Montana this year. The Williamson’s Sapsucker male is black and white with a red throat and yellow patch on its upper chest. 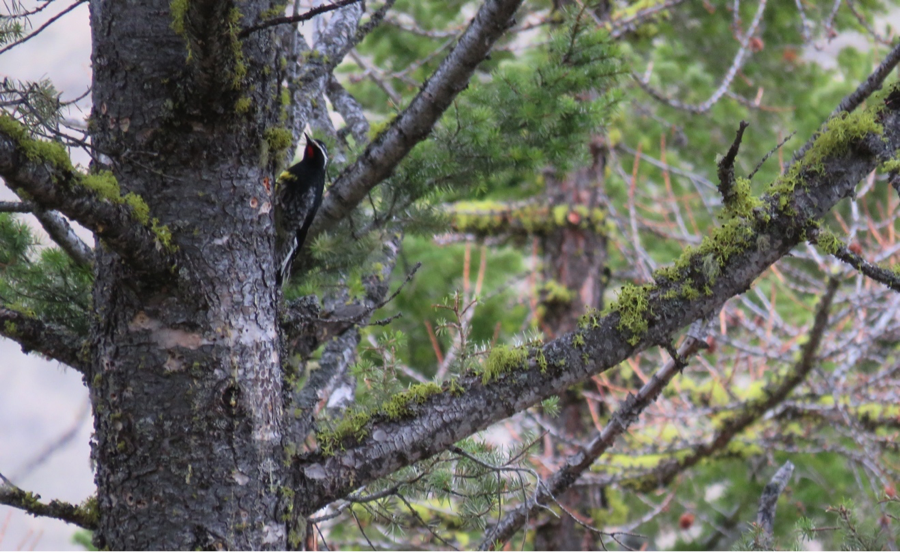 Later that afternoon I put in a second “dusk and dawn” effort, since pygmy-owls seem to be more active in the early mornings and late evenings. I come back to the same site at 7:00 pm to find the male’s night roost. When I get to the road junction, the male is eating a beheaded vole. With the vole in its talons, it suddenly starts flying up the draw at 8:02 pm. I saw similar behavior last week when I tracked it at dusk. 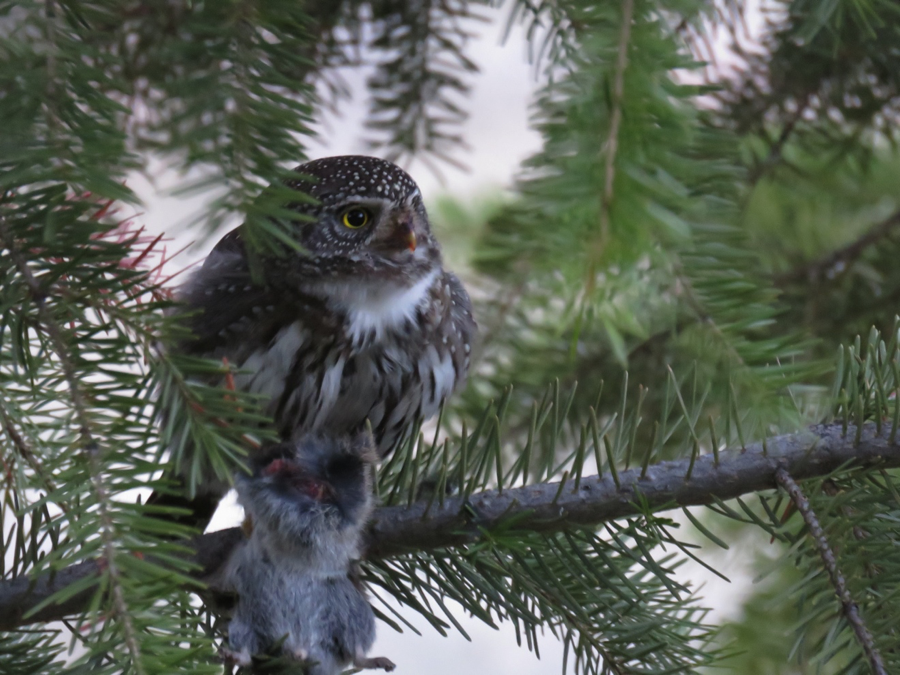 It flies up the draw with the vole, moving from tree to tree. I lose it at 8:13 pm. I finally find its roost (see picture below) at 8:29 pm. I hear Great-horned Owls but no Long-eared Owls.

3/19/15: The next morning, I arrive at the roost site at 6:45 am and #960 instantaneously flies up the draw in the direction of the female. I hear both adults exchanging hoots and various calls but before I get a visual confirmation, the male flies straight back down to the road junction. I do not see the female. 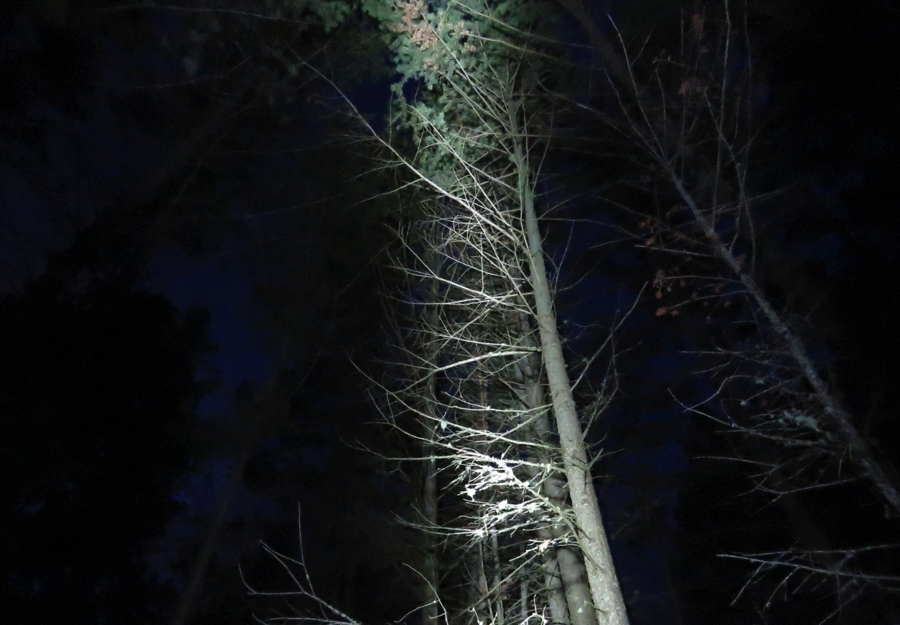 3/20/15: This morning the male is back near the nesting tree; it roosts quietly for over an hour. At 11:09 am I see a male Three-toed Woodpecker. It is setting up a line of holes to suck out tree sap, similar to a Williamson’s Sapsucker. This foraging behavior is rarely documented for Three-toed Woodpeckers. 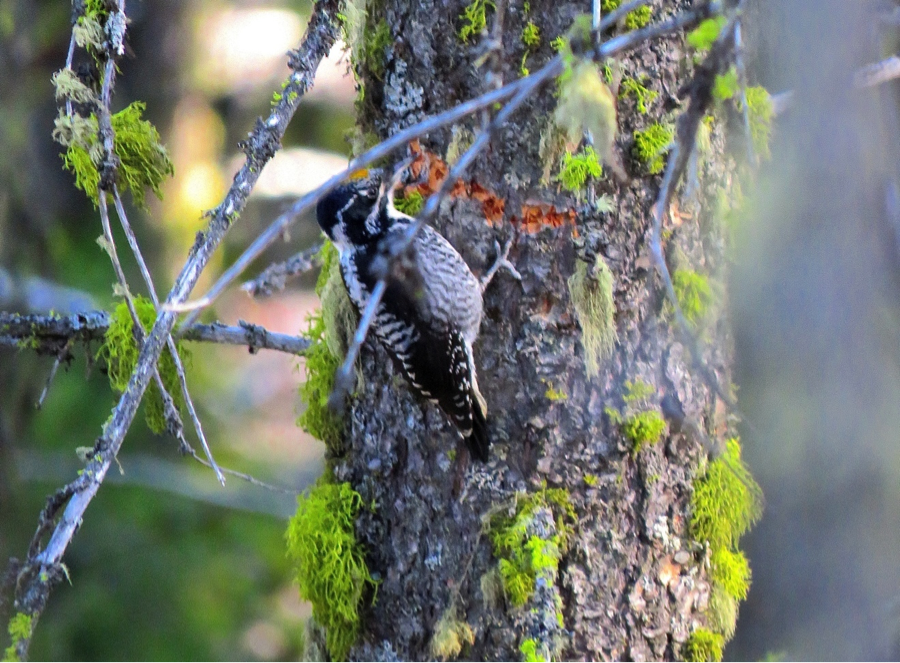 After observing the Three-toed Woodpecker for a few minutes, I finally find #960 at 11:53 am. It is hunting for voles within 30 meters of the suspected nest tree. I can see that its antenna is curved and misshapen (see picture below). When preening, the pygmy-owl occasionally bites on the antenna, causing it to bend. If we catch more pygmy-owls we will trim the antennas to a shorter length. 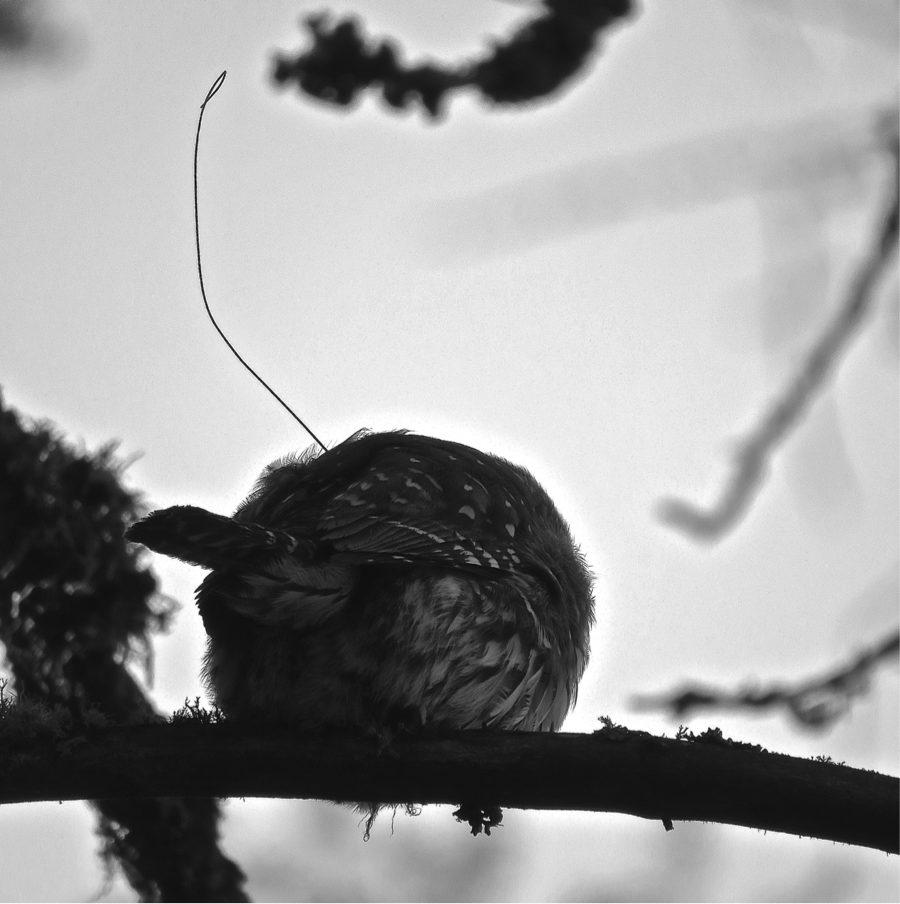 3/24/15: I find male #960 and the female at 8:45 am. They are vocalizing loudly at times, and in other instances their hoots are amazingly soft; I see their throats puff-up but barely hear any sound. The incessant “chat” continues, and at 8:57 am the female flies towards #960 while hooting softly. They then start an 8-minute preening interaction. Shortly after, the female flies off, moving between a couple of trees. At 9:17 am, she lands in the Douglas-fir directly in front of the suspected nest tree, an old larch snag. She looks at the larch over and over and turns her head every few seconds back in my direction. 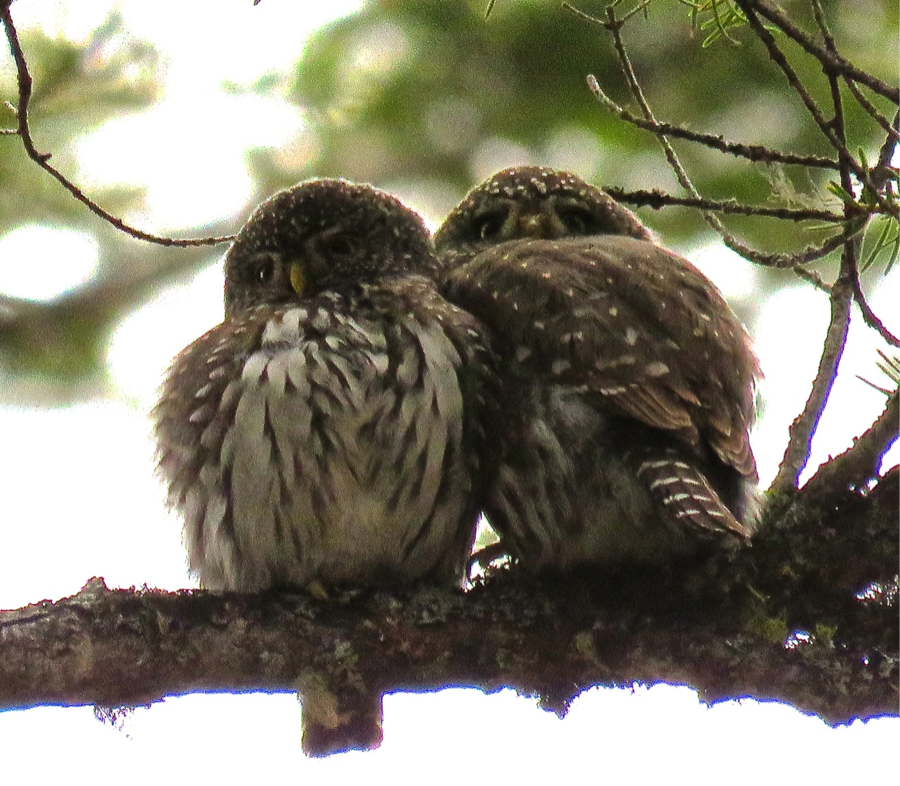 At 9:23 am, the female goes into the cavity. A few seconds she later flies out while hooting. She repeats this behavior twice, then returns to the cavity and vocalizes softly while sticking her head out of the entrance. When she goes in the cavity, I can hear her talons scraping on the bark near the nest entrance. I take the picture below at 9:24 am of the female going into the nest. The male flies into the nearby Douglas-fir tree, and he calls several times, while perched above the cavity entrance. I pack-up and leave just before 10:00 am, in fear that I might be disturbing the pair of owls during a laying event. 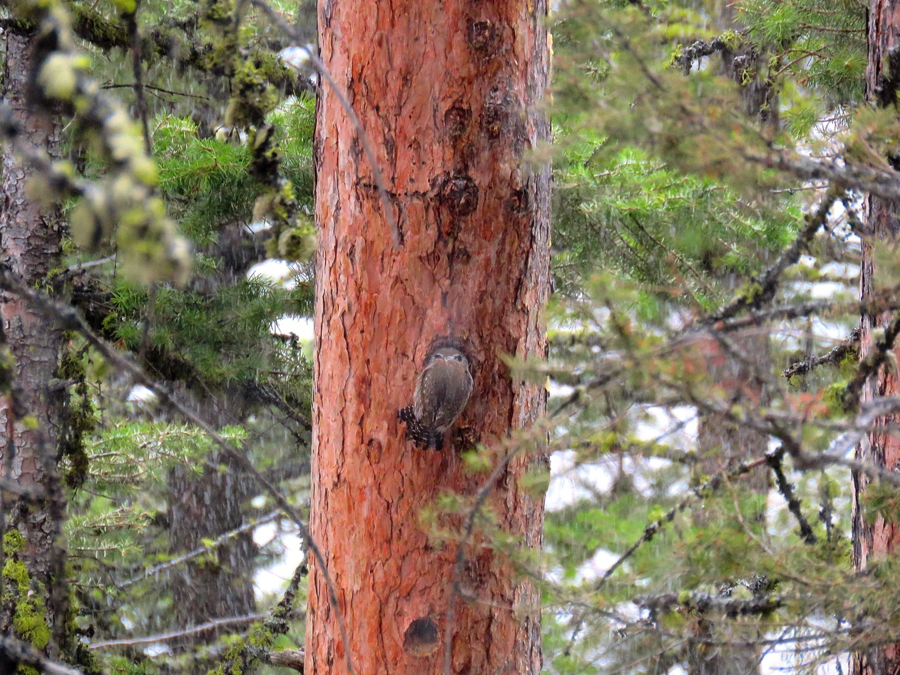 03/31/15: To observe the suspected pygmy-owl nest with limited disturbance, we decide to install an acoustic monitor and motion-triggered camera in the nest area. Our “swat team” (commonly known as the MPG bird crew), goes to the nesting area dressed in camo. We arrive at 11:45am, when pygmy-owls seem to be least active. 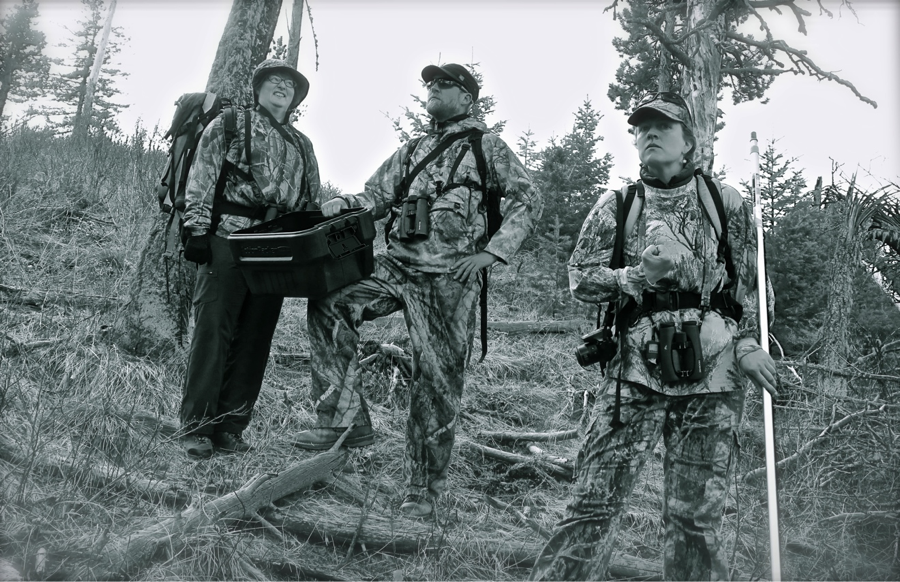 #960 is 50 meters away from the nest. He looks at the bird crew with mild interest. At 12:10 pm he flies down into Baldy Draw. At 12:19 pm the transmitter signal indicates he is far away from the nest site, perhaps near the road junction. After he leaves, Kate and Kerr approach the nest area and set-up a motion-censored camera to record movement of adults around the nest during both night and daytime. 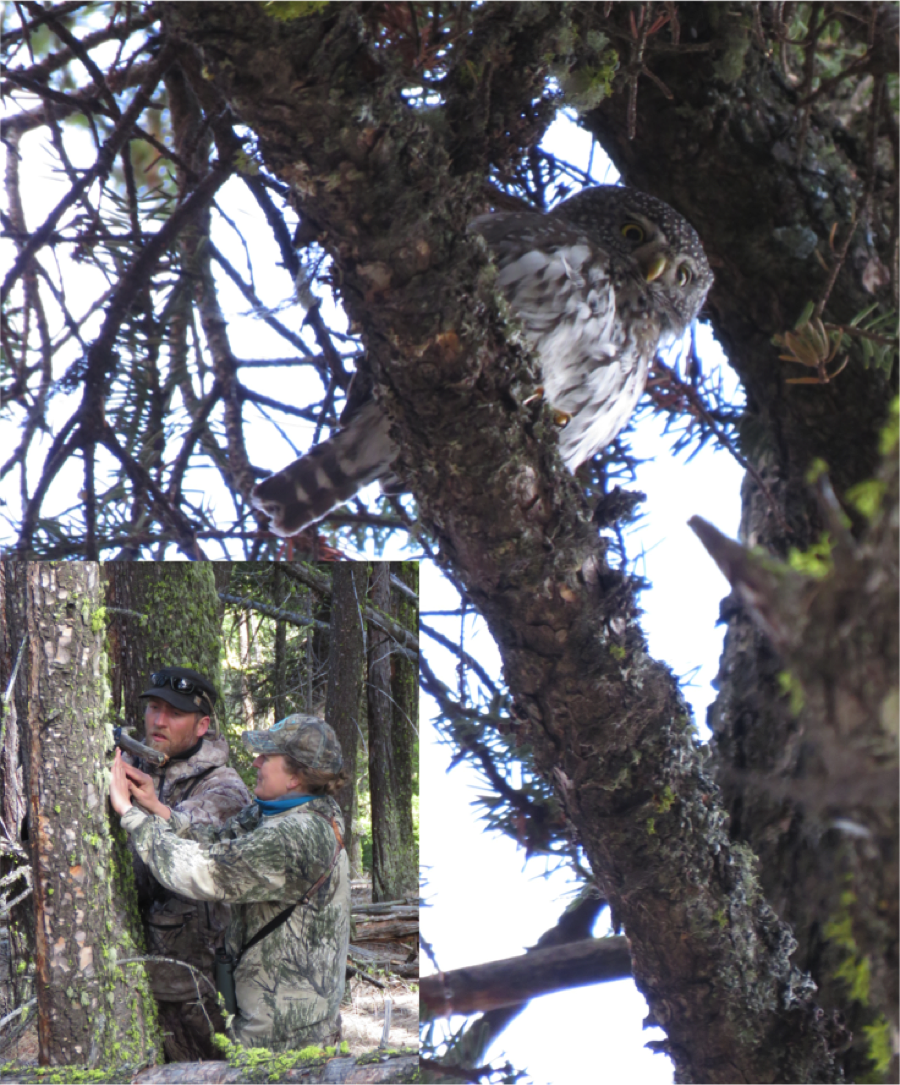 Meanwhile, Debbie and I install an acoustic monitoring station. This automated recording unit will hopefully document all vocalizations, even the subtle tones. The microphone is approximately 10 meters away from the nest (circled in red in the picture). The unit is charged with a solar panel and connects to a microphone placed near the nest. 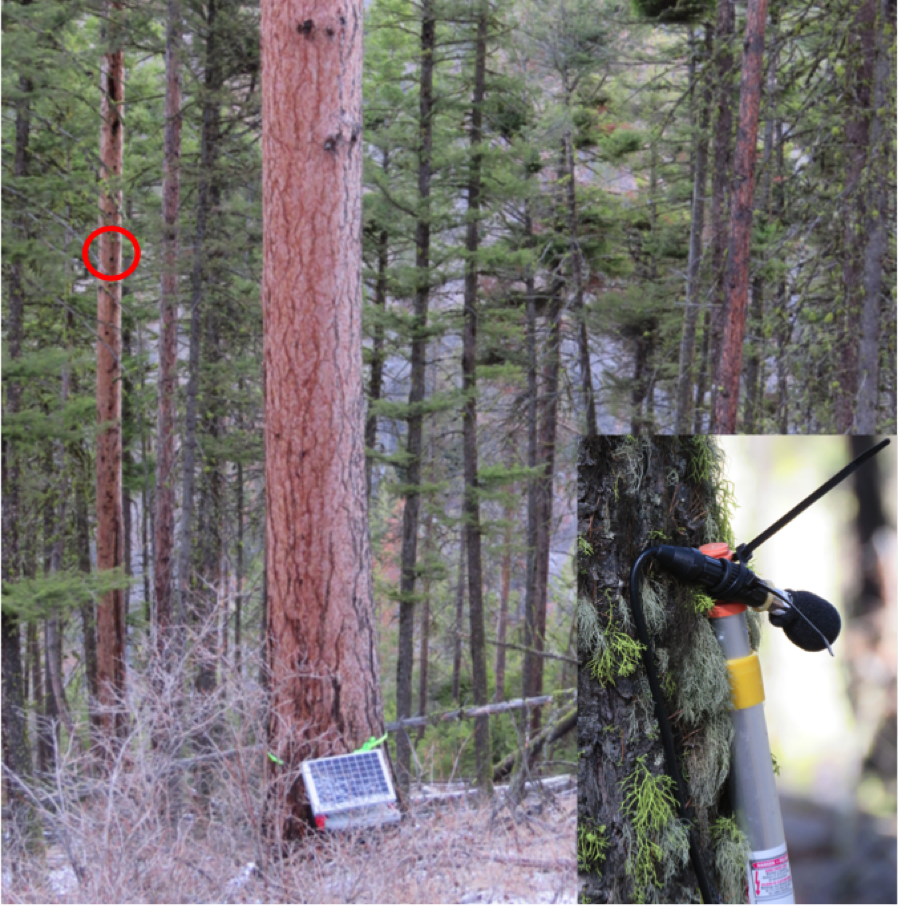 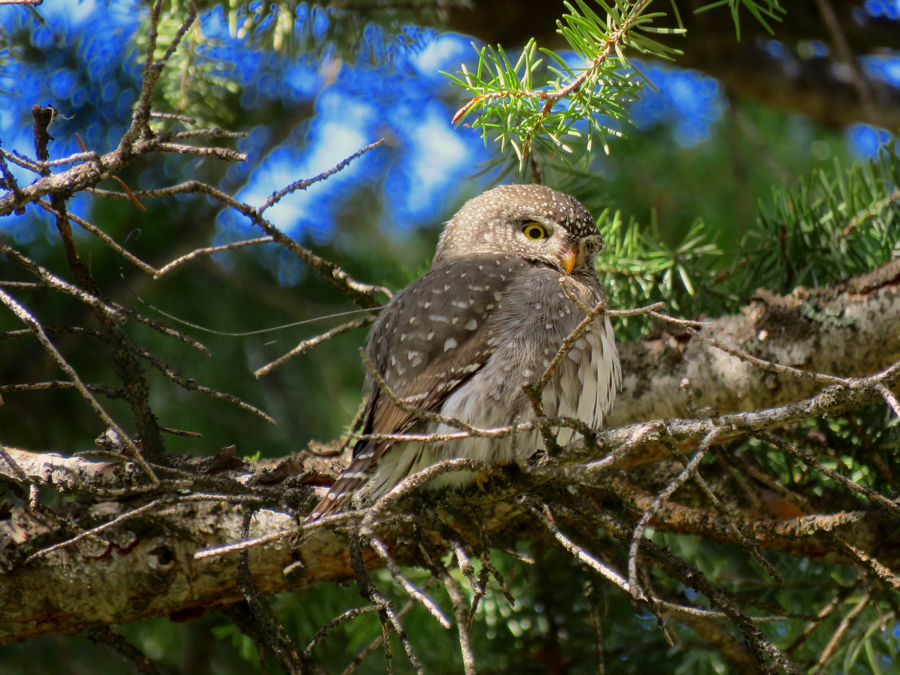 Coming Up: Find out what happens to #960 in my next update. What is going on with this nest?