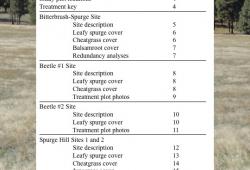 Evaluation of 2010 Treatments of Catagory #3 Areas