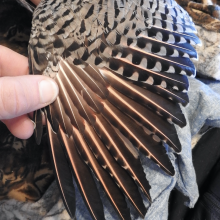 Most people recognize the ubiquitous Northern Flicker as the most common woodpecker they encounter in their daily lives. Early-season drumming and excavating also makes them one of the most troublesome birds for homeowners. Whether loved or reviled, few people stop to consider the movements or population dynamics of Northern Flickers.

Two subspecies of Northern Flicker inhabit the United States and Canada, with the Yellowshafted version (Colaptes auratus auratus) occurring in the east, and the Red-shafted version (C. a. cafer) occurring in the west. As their names imply, feather-shaft color defines the main differences between these subspecies, though facial and nape markings also differ. These subspecies hybridize along a long, narrow zone that cuts right through Montana. Though the Bitterroot Valley sits well west of the defined hybrid zone, I’ve seen several flashes of yellow from flying flickers in my time living in the Bitterroot Valley.