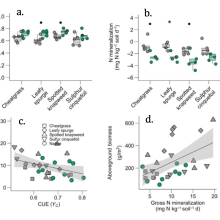 Invasion is a significant driver and consequence of global change (Mack et al., 2000; Pimentel et al., 2006; Vitousek et al., 1997). The rates of invasion are predicted to increase rapidly in the coming de- cades as world-wide trade continues to expand, demand for agricul- tural products increases (Simberloff et al., 2013), regional climates shift and natural and anthropogenic disturbances become more prev- alent. Plant invasions in particular are a major threat to the biodiver- sity and stability of native terrestrial ecosystems (Ehrenfeld, 2003). Stable ecosystem functioning is dependent on carbon (C) and nitro- gen (N) cycling, but we still know little about how these change with plant invasion and if shifts are general or specific to each species of invader. In this study, we combined observations of natural invasions with experimental plantings of exotic plants to determine if four in- vasive plant species common in semi-arid grasslands of the Rocky Mountain West alter soil microbial C and N cycling in ways that feed back to influence invader productivity.

By: Anna Noson and Tricia Rodriguez