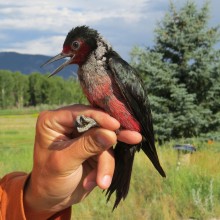 Furthermore, our results suggest that Lewis's Woodpeckers who initiate nests earlier in the season are more successful than later initiated nests (Fig. B). We observed that Lewis's Woodpeckers in cottonwood forest competed for cavities with European starlings (Sturnus vulgaris). The competition for nests early in the season may dictate nest success outcomes in an arms race between adult survival and juvenile survival. On the one hand, early returning adults at breeding grounds may better secure a nest site and successfully rear offspring against. But, on the other hand, the early returning adults may risk increased mortality from predation risk due to low canopy cover before the trees leaf out and lower foraging availability before insects and berries abound. We also found that cottonwood forests contain a much higher density of dead trees and snags than burned forests. Snag availability provides nesting substrate (i.e., cavities) for many cavity-dependent species. Our results suggest that land managers at Lewis's Woodpecker breeding grounds should promote the retention of tall trees and snags.