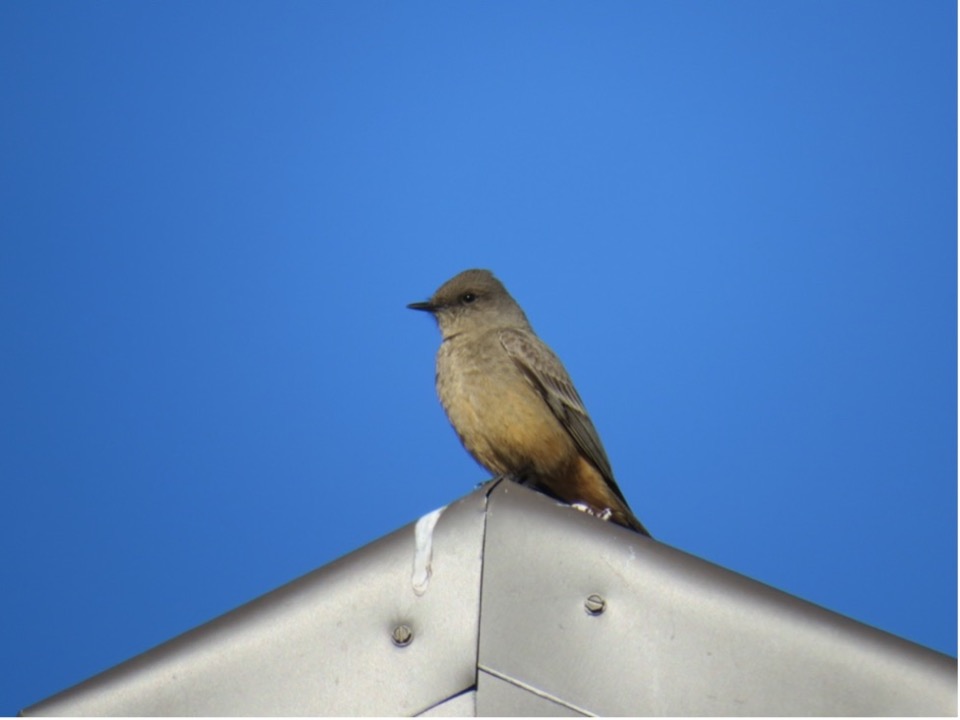 We’ve noted Say’s Phoebes nesting around the Top House since MPG Ranch’s inception over a decade ago. Their warm, cinnamon belly and flanks present a muted contrast to their slate-gray body and wings. I remember seeing my first fluff-filled nest tucked on the side of a fuel tank by the garage. What bird would nest in such a busy place?

The phoebes nest on various inconvenient ledges around ranch buildings, only occasionally using the nest platforms we offer.

Throughout the years, MPG staff and friends all absorbed Say’s Phoebe happenings as part of daily life. The plaintive yet friendly “phoebe” call accompanied any work or leisure enjoyed near the Top House. Flycatching behavior invited the eye away from computer screens to follow delicate dances from fence post to fence post. We scolded them when they discovered the moth traps set out on the deck. They scolded us as we attempted to give their nests a wide berth. We marveled at the pair’s ability to nest twice in a season. Multiple broods of phoebe babies dotted the roof as if the shingles fruited birds. As the buildings and our use of them changed, we wondered where they might nest next or if they’d even stick around. They not only stuck around, but they also thrived. Having a summer wedding at the ranch? The phoebes are first on your guest list. One year a contractor inadvertently invited them to nest in the garage. We collectively committed to leaving the door open while they nested (we made sure to shut the door in between nests one and two). We also witnessed phoebe expansion to new, always peopled, places on the ranch: Orchard House, Partridge Alley, and in a neighbor’s yard by the Experimental Garden. 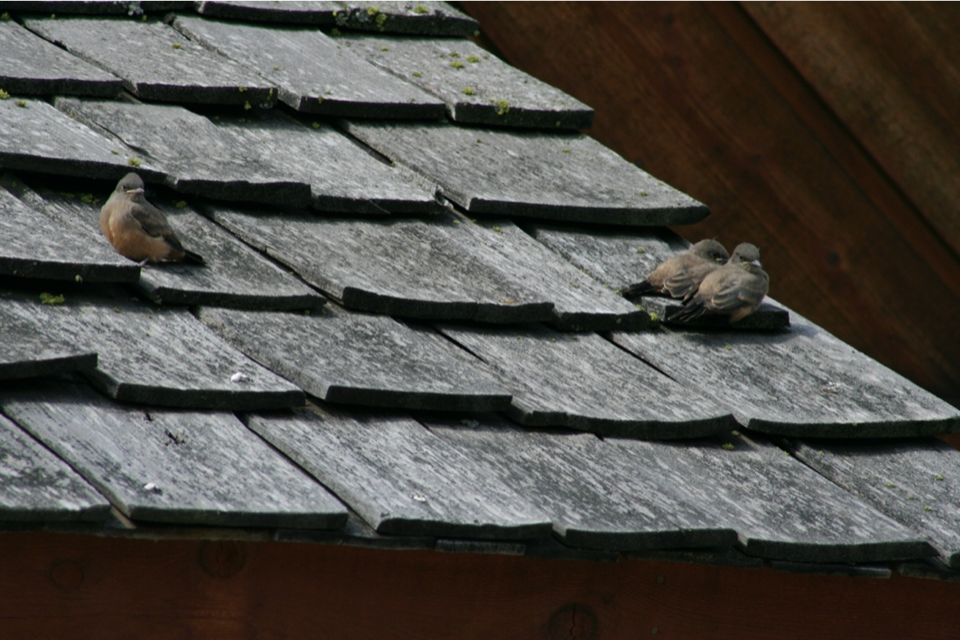 A crop of young phoebes enjoys the warmth and vantage of the shingled roof.

The hearty, cold tolerant, and at least locally people-loving, Say’s Phoebe has the northernmost breeding range of any tyrant flycatcher. Though migratory, some have overwintered as close as southern Oregon and Idaho. They typically arrive back in Montana right about now, much earlier than most migrants. Many of us ranch birders made it a quest to document the earliest arrival date in Montana. After several years of jockeying back and forth, Adam Shreading from Raptor View Research Institute still holds the record with an MPG Ranch observation of February 12th. The latest winter date is December 18th from a house near Bigfork.

A Say’s Phoebe shattered all records this winter by taking up residence around the Top House, beginning in mid-November. I started getting calls and texts from various staff–birdy and non-birdy–and urged everyone to go on “phoebe watch.” We had consistent observations of the phoebe hanging out near the chimney vent, poking for insects under the building’s eaves, and sitting on nearby fence posts. We sometimes saw it flycatching on the warm winter days when a handful of insects emerged. The eagle crew moved dead bugs from inside the house out to the deck railings. Everyone cringed in fear at approaching cold weather systems. We hoped the equally observed overwintering Northern Shrike would find alternative prey; this winter represents the first time I’ve wished for House Sparrows around the house. 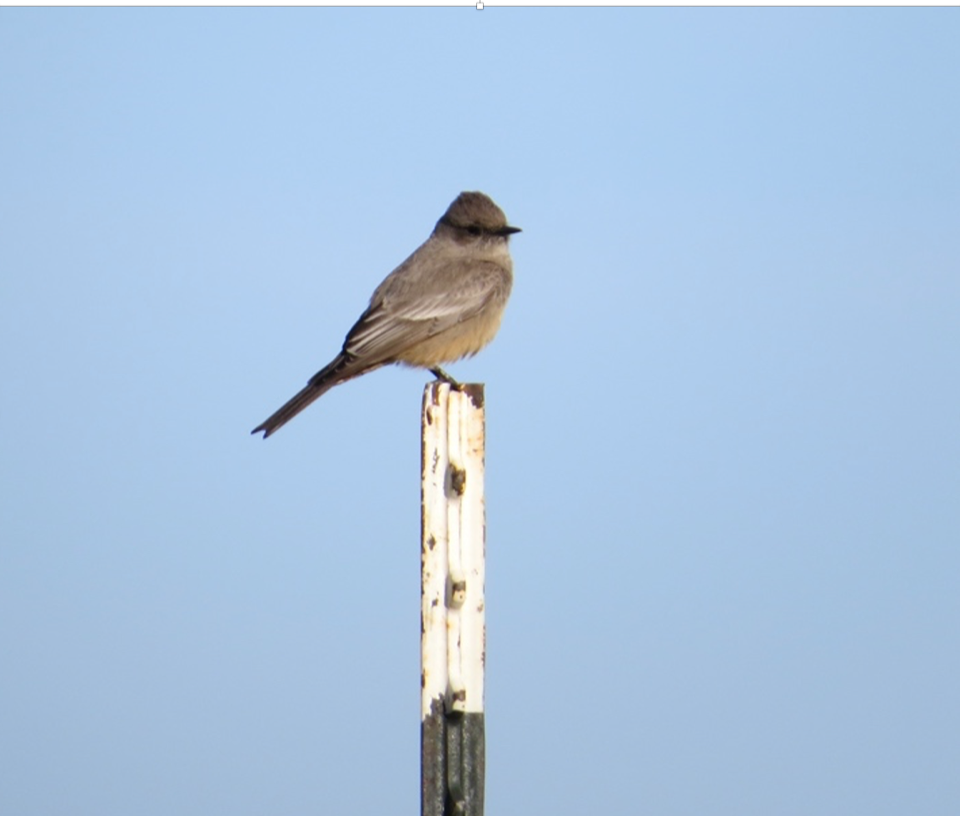 A Say’s Phoebe perches on a fence post, eyeing its surroundings for insects.

Unfortunately, our observations of the phoebe petered out after February 5th. Though the weather was above freezing that day, by February 11th, temperatures dropped below zero and blistering winds and snow accompanied low temperatures for multiple days. We’ve not seen the phoebe since then. We can only hope it found a new location and survived the storm. I’ve glared suspiciously at the shrike several times since.

Though we don’t know this particular phoebe’s fate, its consistent presence from November into February earned it the distinction of the first overwintering record of a Say’s Phoebe in Montana. Even if a phoebe shows up again at the Top House in the next few weeks, it could be the same winter bird or a new spring arrival. In any case, I’m looking forward to a phoebe-filled field season.