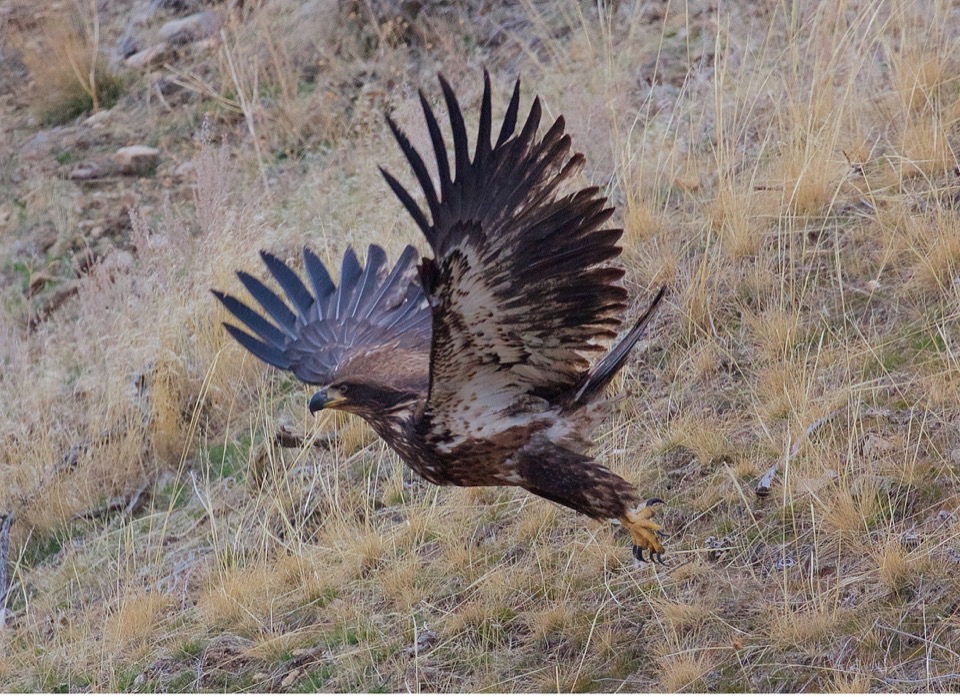 An immature Bald Eagle erupts from a hillside after patiently waiting to feed on a carcass.

We live and work in eagle country. Forested mountain lakes drain into rivers that meander through broad swaths of food-rich grasslands, shrubby patches, and cottonwood groves. These landscapes are exceptional as a year-round place for Bald Eagles to thrive. But sometimes eagles get injured and need our help. Through our partnerships with Raptor View Research Institute and Wild Skies Raptor Center, we occasionally get a more detailed glimpse into the lives of these iconic birds. Below are two stories of rehabilitated eagles and the network of people who came to their aid.

Bald Eagle A9
On August 23, 2020, a landowner along Skalkaho Road near Hamilton found an adult Bald Eagle in a ditch under a powerline. The local game warden coaxed the eagle into a giant pet crate and drove it to Brooke Tanner's Wild Skies Raptor Center. 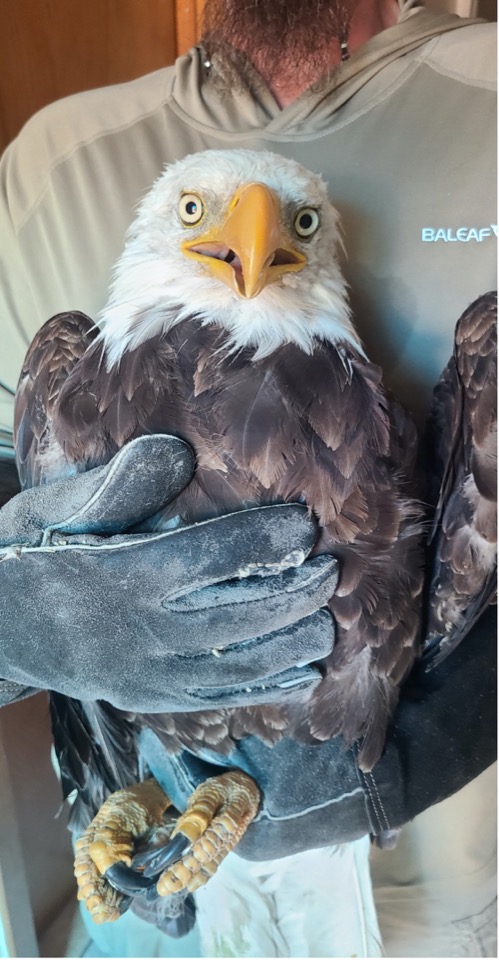 The male eagle (above) showed no visible wounds. Still, some minor internal injuries, including air between the heart and liver, demanded closer inspection. Brooke and her team spent the next two weeks caring for the eagle. It recovered quickly from the perplexing incident, and they released him with a blue leg band, A9.

The use of large, brightly colored bands or tags is a step up from the standard, government-issued metal bands. These are meant to be read during close encounters, like when a bird is recaptured. The metal bands are still required, but the prominent blue markers' addition helps tell more of an eagle's story without further human interference. Photographers, birders, or trail cameras now play a critical role in resighting marked birds.

This December (over three months after release), eagle A9 appeared on two separate cameras from the Bitterroot Valley Winter Eagle Project--a study documenting eagles with auxiliary markers. In the first image, December 3, he feeds on a carcass alongside black-billed magpies (below), looking healthy and hungry. 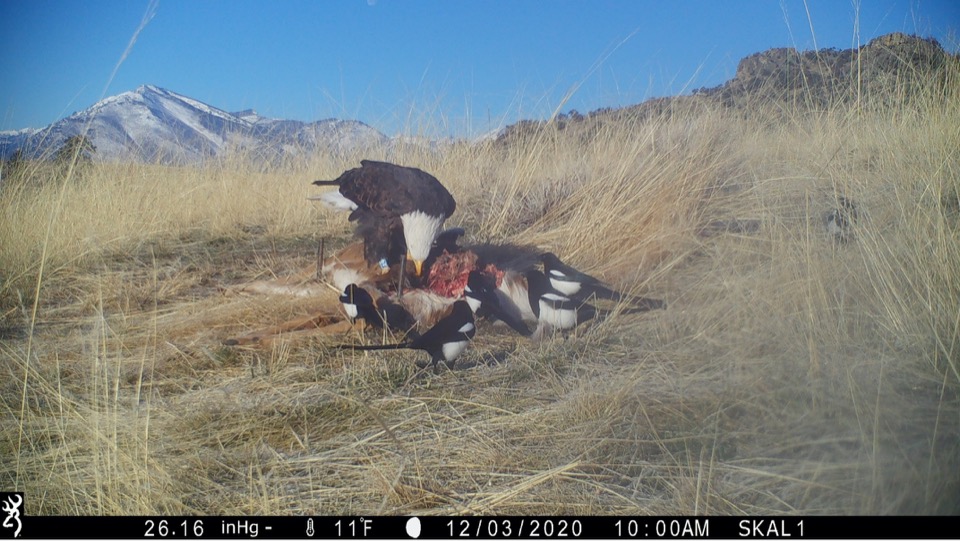 Then, from December 17-20, we detected him again on a different project camera a few miles away (below). His posture and behavior from a series of photos over these four days suggest he is dominant over other eagle visitors. Both cameras are near the spot of his injury. 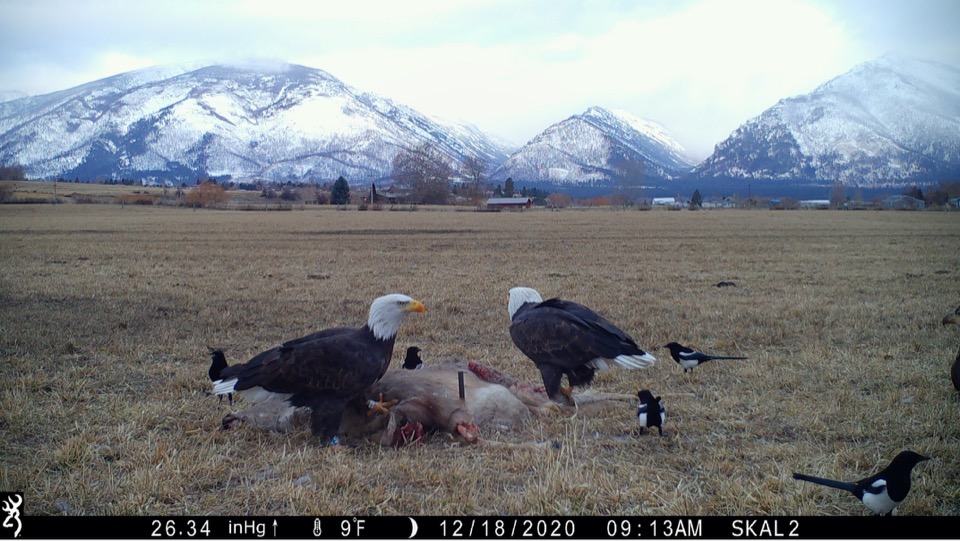 The combination of dominant behavior, age, and location leads us to believe he is the breeding male at a nest near the rescue site, one that has some history. Coincidentally, Bitterroot Audubon volunteers monitored this nest for many years because it is one of the farthest from the Bitterroot River. Additionally, concerned citizens appealed to the local electric company in 2013 after finding an electrocuted eagle near the nest. It took a few years before a mated pair used the nest again. We plan to investigate whether eagle A9 and a mate use the nest and successfully raise some chicks.


Bald Eagle 70
In June 2020, Wild Skies Raptor Center admitted a young female bald eagle from a mysterious incident. Somebody found the orphan nestling under a nest on a lake island. She had a fractured coracoid—the bone that connects the sternum to the shoulder. The adult female and a sibling were next to her, dead. An unrelated adult female laid nearby, motionless and sick--eventually succumbing to the hidden threat. They all tested negative for avian flu and had low levels of lead. The lab suspected a possible toxin not covered in their toxicology screen.

Again, Brooke and her team diligently tended to the orphan eagle, helping her recover. They released her that summer, sporting a new blue leg band, 70. On February 23, Estelle Shuttleworth (a hardy and seasoned project volunteer) photographed the young female (below) at one of our study sites. She remained there for a few days, eating well and looking healthy. 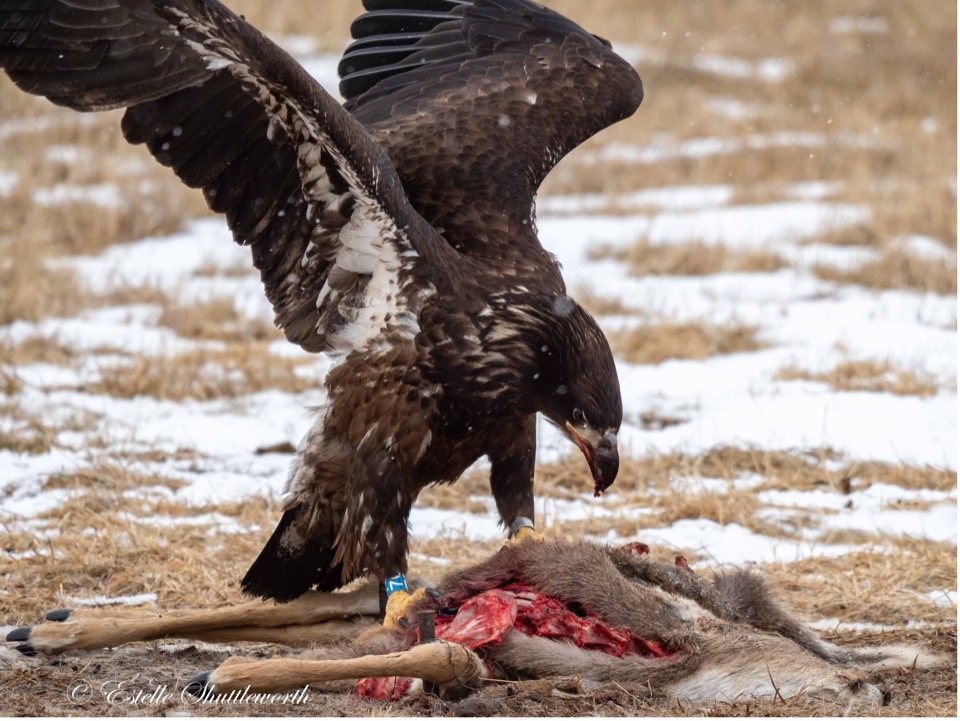 It is rare to document rehabilitated birds that are surviving and thriving. The dedication and empathy of kind people--from private landowners to wildlife professionals--help us stay connected in eagle country. Maybe you'll spot the next eagle with a leg band or wing tag, keeping the stories alive.


If you see or photograph an eagle with a blue leg band or wing tag, please contact Raptor View Research Institute.