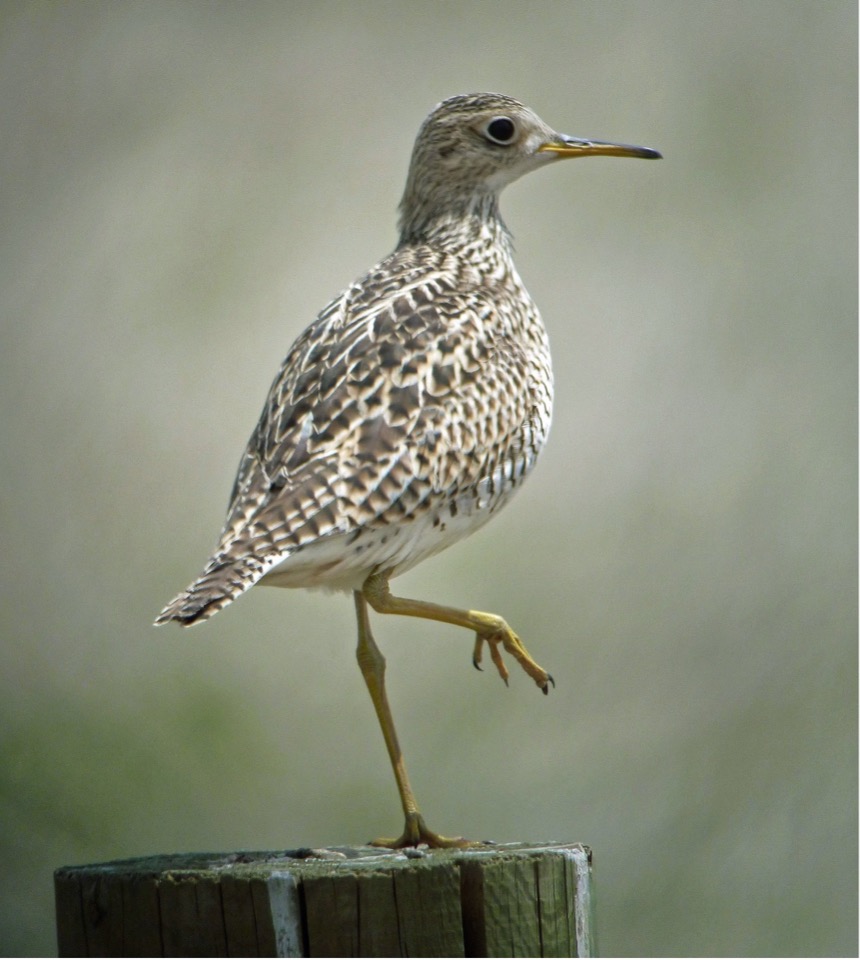 Nate Kohler, one of our Montana bird buddies, photographed this Upland Sandpiper on its favorite perch.

My first words were an excited, “No way!” I had just heard from our friend Bill Evans, an expert in identifying birds from their flight calls, that our mystery call was from an Upland Sandpiper.

This image, a spectrogram, shows what an Upland Sandpiper flight call looks like when displayed with audio software. The distinct look and sound identify it from other birds.

We collected this unknown call from a microphone installed on a mountain ridge above the Bitterroot Valley. Our microphones record migrants as they fly across the sky on spring and autumn nights. Warblers, sparrows, and thrushes produce the most calls, but we also record other types of migratory birds. Gulls, marshbirds, and other shorebirds dot our recordings. We have recorded a surprising number of Baird’s Sandpipers, a few Solitary Sandpipers, and, so far, one Pectoral Sandpiper.
Upland Sandpipers breed and migrate east of the Continental Divide, where they favor prairie grasslands. The Bitterroot Valley, located west of the Divide, seems like an odd place to encounter this bird. A quick search on eBird revealed only four sightings reported in all of western Montana. 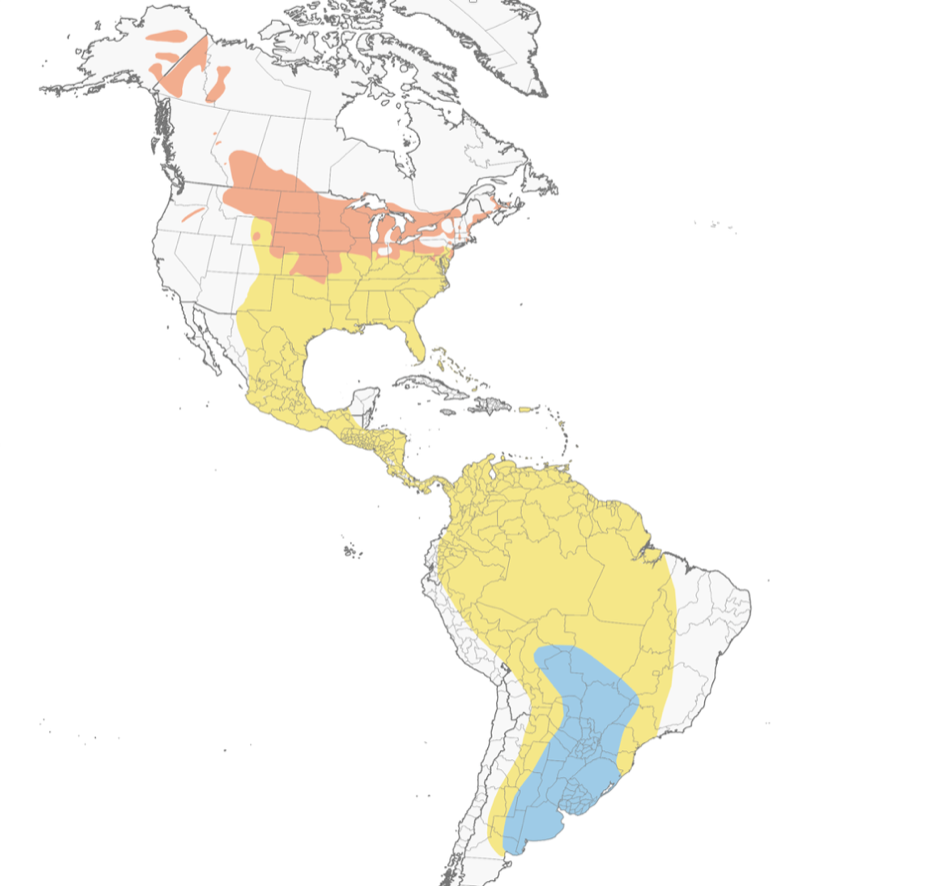 One call is not noteworthy. Rare species appear when they get blown off course or lost. But every year, since that first surprising call in August 2013, we have consistently recorded Upland Sandpipers every fall migration. In 2013 we had only three microphones. By 2019, we had installed 50 microphones in the Bitterroot Valley. With the increase in microphones, we also saw a rise in the number of Upland Sandpiper calls. What started as a handful in 2013 rose to 29 in 2018 and 51 in 2019. These numbers are low compared to the hundreds we have recorded in eastern Montana, a known migration route for Upland Sandpipers. Still, our acoustic records from the Bitterroot are impressive relative to the number of on-the-ground observations from humans. 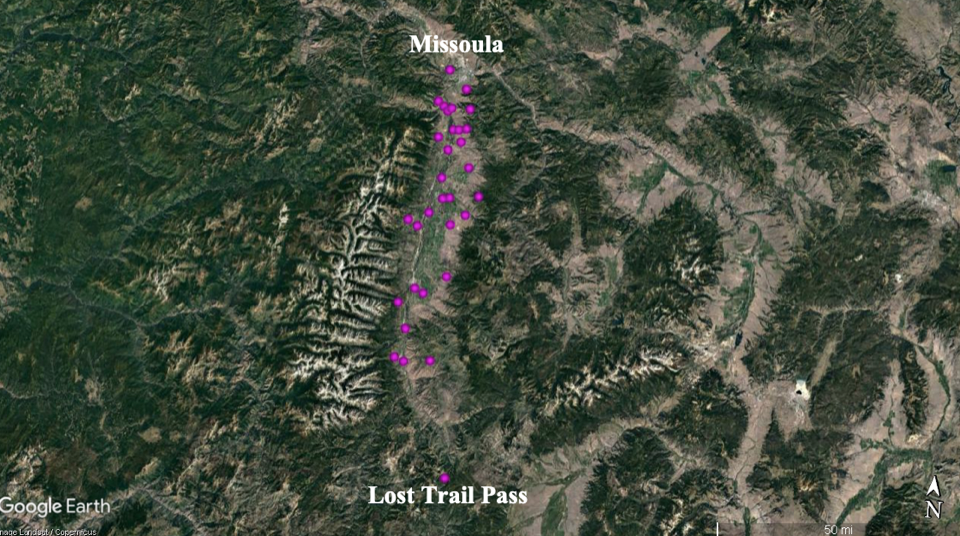 This map shows where in the Bitterroot Valley we have recorded Upland Sandpipers. Detections occurred throughout the area at different elevations, topography, and habitats.

If western Montana is a migration corridor for Upland Sandpipers, shouldn’t we see or record them on our microphones more frequently? Not necessarily. Many shorebirds that migrate long distances, like the Upland Sandpiper, fly non-stop and at very high altitudes, beyond the range of eyes, ears, and microphones. Researchers described Upland Sandpipers as “extreme migrants” who travel non-stop over 3,000 miles up to 7 days at a time. Tropical forests, ocean crossings, and high mountain ranges, including the Andes, do not stop them (Hill, 2019). When they land to rest and refuel during migration, they usually remain silent and hidden in tall grasses.
Is it possible that breeding Upland Sandpipers in Alaska and northwestern Canada migrate differently than those that breed east of the Divide? Yes, we know other species do this. The only way to know for sure is to track individual birds during their migratory movements. Until then, we’ll keep our eyes, ears, and microphones searching for Upland Sandpipers. Stay tuned!

Acknowledgments
We thank all those who have helped review our nocturnal recordings:
Carrie Voss, Lesley Rolls, Eric Rasmussen, and Garrett McDonald

Debbie graduated from the University of Wisconsin-Madison with a degree in pharmacy. She worked several years in traditional pharmacy and 10 years in the pharmaceutical and biotechnology industry. A passion for birds led her away from pharmacy and towards avian-related research projects and fieldwork in Idaho, Montana, and Wyoming. In 2011, she received a certificate from the University of Montana in Geographic Information Systems (GIS) Sciences and Technology, though her favorite elective class was ornithology.

At MPG Ranch, Debbie leads the avian and bat acoustic monitoring project, conducts year-round bird surveys, and performs GIS-related analyses and mapping tasks. When not behind a pair of binoculars or a computer screen, she enjoys anything outdoors especially if it involves birds or snow.