We are very excited about the first week of spring raptor migration. We have a new site and bird counts are high!

Last year our survey began from a mid-elevation site that was painfully slow for a few weeks. The weather was cold and wet with snow blanketing the Sapphires into April. Then we discovered that migration at this end of the Bitterroot Valley might spread west from the ranch to the foothills of the Bitterroot Mountains. This year we have a lower survey site, which looks very promising so far. We can now scan up towards Baldy Mountain and the Bitterroots, picking out silhouettes of raptors that were previously camouflaged in the terrain as they flew by at eye level. Birds that are traversing the river bottom are also easier to observe.

Conditions were favorable this week, with partly sunny skies and good winds. We had a couple days of rain, each followed by a sunny day that provided a surge of raptors. On March 22nd we had 135 raptors, which was close to last year’s high during peak migration in mid April. 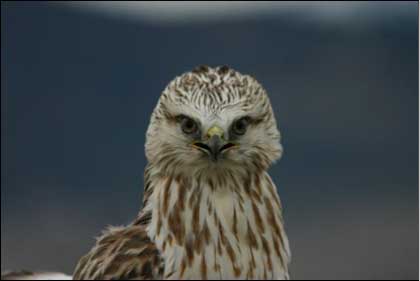 In addition to migration surveys, Rob Domenech and his crew from Raptor View Research are banding raptors this spring. This rough-legged hawk will eventually migrate north, where it breeds in the arctic. Photo: Eric Rasmussen

For comparison, the only other spring raptor survey in our region (Denver, CO.) had a total of 100 raptors for the period of 3/1-3/23.