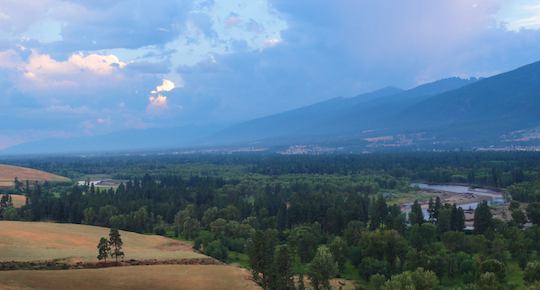 Hypotheses that have little empirical support plague the field of invasion biology. Contrary to current beliefs, we have shown that some invasive plants harbor greater and more diverse AMF species than remnant native plant communities. In 2012, we will assess the functional consequences of these differences, and identify the mechanisms that allow exotic monocultures to support greater belowground diversity than multi-species native communities. One of our working hypotheses is that invasive plants may be less afflicted by pathogens than native plants. A recent greenhouse experiment suggested that both mutualists and pathogens significantly increase the invasive success of knapweed. Throughout 2012, we will continue to apply fungicides to selected knapweed and spurge invasions on MPG Ranch to determine how fungi influence their invasibility. We will also join researchers at the Rocky Mountain Research Station in their surveys of Montana (invasive range of weeds) and Turkey (native range) to determine if pathogen release and a lesser dependence on mutualism explain plant invasive success.

A 2011 collaboration between MPG Ranch and Western Washington University allowed us to learn more about the invader sulfur cinquefoil, and we documented how its invasion influences microbial communities and ecosystem processes. This work resulted in an undergraduate thesis that we hope to publish in the upcoming year. In 2011, we also established experimental plots of diverse native communities and monoculture knapweed, spurge, cheatgrass, and sulfur cinquefoil to determine if the ecosystem process changes we observed are caused by the invasions.

We recently learned more about the distribution of the cheatgrass pathogen Ustilago bullata on the ranch. Preliminary data indicate that other endophytes influence the ability of Ustilago to infect cheatgrass. Healthy plants harbored higher numbers and different types of fungal endophytes than diseased plants. In 2012, we will subculture fungi for experimentation. These fungi should help us evaluate the potential of this pathogen for use as a biocontrol agent.

Ylva graduated from the Swedish University of Agricultural Sciences with a M.Sc. in Biology and Horticulture in 1996 and a Ph.D. in Ecology from Penn State University in 2004. She received the Alumni Association Dissertation Award for her work in agroecology and subsistence farming in Sub-Saharan Africa. Post-doctoral positions at Montana State University and later at Copenhagen University as a Marie Curie Fellow allowed her to explore the role of arbuscular mycorrhiza, a root-fungus symbiosis, for geothermal plants in Yellowstone National Park and coastal grasslands in Denmark. Her research has been published in international journals such as Nature Communications, Ecology Letters, and New Phytologist.

Ylva joined MPG Ranch in 2010. Since then, she has explored how invasive plants common to western Montana, including spotted knapweed (Centaurea stoebe), leafy spurge (Euphorbia esula) and cheatgrass (Bromus tectorum), influence soil microbial community composition and function, and how this in turn may affect invasive success. A lot of her research also focuses on the AM symbiosis in terms of community ecology and physiology. A current project addresses how exchange ratios in this symbiosis may differ among co-occurring plants and depend on soil nutrient availabilities. She uses surveys, field and greenhouse experiments, and literature approaches such as meta-analyses to address questions. To learn more about research and publications from Ylva and her group, see CV below and the Soils, Plants and Invasion section.

In addition to her work at MPG Ranch, Ylva is an adjunct professor at University of Montana at the Department of Ecosystem and Conservation Sciences.

Stacia Hill Cleans Up at the Butte Science Fair