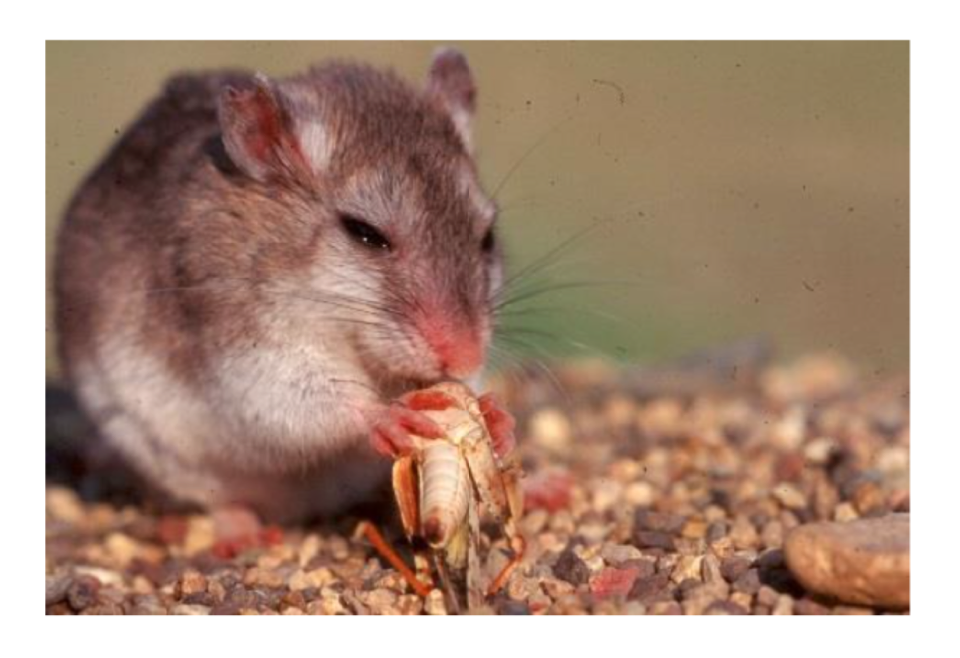 Approach: We sampled small mammal populations in native grasslands, comparable sites intentionally transformed to crested wheatgrass, and sites that are being restored from crested wheatgrass under natural precipitation (“Restoration 1”) and water supplemented scenarios (“Restoration 2”). This approach allowed us to assess whether small mammal abundance and species composition in restored sites were more similar to native sites versus crested wheatgrass sites. We also quantified small mammal predation rates on native seeds and grasshoppers. Finally, we quantified the effects of small mammal seed predation on native plant recruitment by adding seeds of six important native restoration species (bluebunch wheatgrass, lupine, balsamroot, hairy golden-aster, bitterbrush, and blanket flower) to paired cages with or without rodent access at three locations on each plot across the four treatments.

Findings: The effect of restoration treatments on small mammal populations are not yet definitive, as differences among treatments are not significant at present (F3,10 = 0.9, P = 0.5). We attribute this result to high variability in small mammal populations. Our results for the native sites are consistent with other studies across native grasslands of western Montana showing that deer mice dominate these systems with montane voles sporadically present at lower numbers. Hence, our approach is effectively quantifying the system. 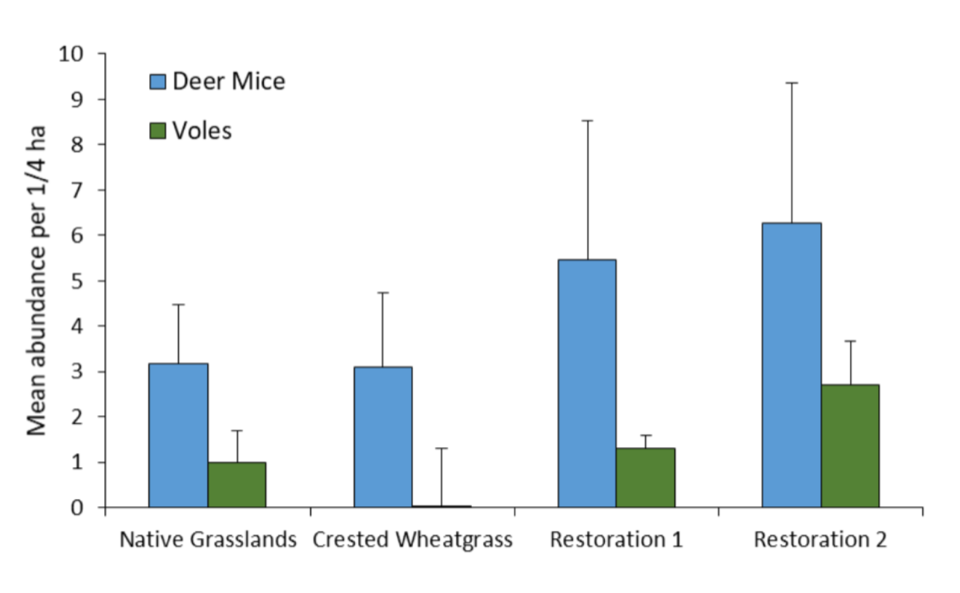 In general, crested wheatgrass may reduce deer mouse abundance and simplify small mammal communities by virtually excluding voles as indicated by data from most crested plots at most sampling periods. However, we had a few cases where crested wheatgrass plots had unusually high mouse numbers increasing mean abundance estimates and variance. In contrast, the restoration plots tend to have higher mouse and vole abundances relative to crested plots and possibly relative to native plots. We expect that these patterns will solidify over the next couple years as our sample size grows sufficiently to override the variability inherent in the system.

Surveys of mouse predation rates on seeds and grasshoppers are not reported here, as the grasshopper work was a pilot study and the seed offering results are still being quantified in the lab. 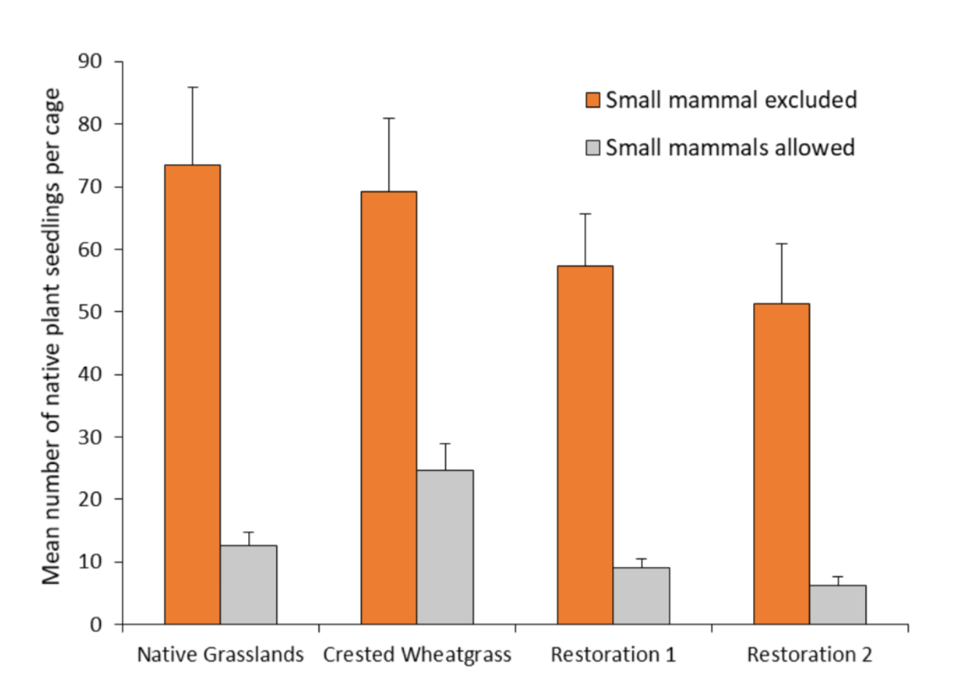 However, our seed sowing experiments indicate that deer mice are effective seed predators, suppressing recruitment of important native plant species by 82% across all treatments (F1,189 = 909.33, P < 0.05). The finding that these effects were similar in native and restored sites, but weaker in crested sites (F1,180 = 17.71, P < 0.05; presumably due to generally lower mouse abundance in crested habitats), suggests that management efforts are restoring this ecological function. However, these results also emphasize the need to address rodent seed predation to improve restoration. Recent work in similar grasslands suggests that the answer to this problem may lie in new seed coating technologies that can inhibit rodent seed predation and increase native plant recruitment (Pearson et al. 2019; Restoration Ecology 27:254-260).

My primary interest lies in integrating community and invasion ecology to advance these fields of research and improve invasive species management. Ecological theory is founded on traditional manipulation experiments, where we attempt to understand processes of community assembly by removing individual system components and examining the outcome. However, even relatively recent assemblages in the northern United States represent collections of organisms that have had roughly 11,000 years to interact and assemble themselves. Thus, simple manipulation experiments cannot reveal the sequences of ecological and evolutionary mechanisms that serve to structure communities over time. Biological invasions represent unique natural experiments whereby a completely novel organism enters into a new system and either fails to establish, establishes with little effect or establishes and alters the recipient community in ways that forces it to reassemble. Hence, biological invasion events provide acid tests for ecological theory by illustrating processes of community assembly and reassembly in real time. Such experiments provide unique research opportunities to simultaneously advance ecological theory and improve invasive species management.