Migration represents a challenging time for birds. They travel long distances through unknown landscapes. Many individuals recently fledged from a nest, and fall migration tests their ability to survive to their first breeding season. Key habitat features for birds at their stopover sites include food, water, and cover to protect them from predators. This year we are conducting several concurrent projects focused on researching the dynamics of this amazing phenomena, while also exploring how we can provide more and better bird habitat at this time of year.

MPG Ranch- Bird Use of Shrubby Draws During Fall Migration
Using georeferenced aerial imagery loaded onto an iPad, Kate, Debbie, and Kerr map the birds using three shrubby draws on a weekly basis. This mapping allows us to examine bird use of fine-scale habitat features, particularly those we hope to improve via plantings and ungulate exclosures. They can also examine spatial and temporal changes in bird use of the draws through the season. Vesper Sparrows currently dominate in the draws, though their numbers have dropped the past week while other sparrows have started to increase. 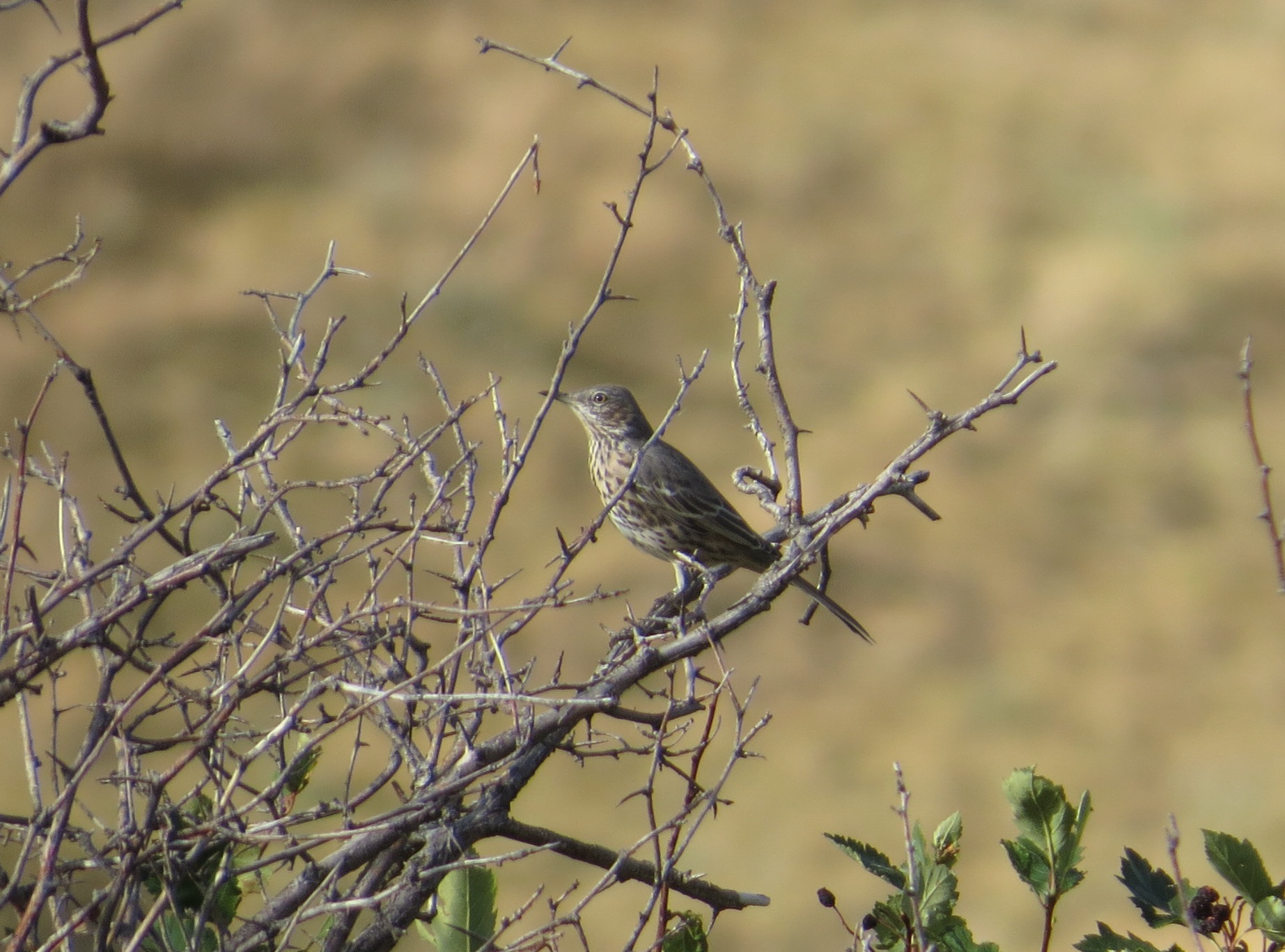 Kate spotted the second Sage Thrasher of the season. 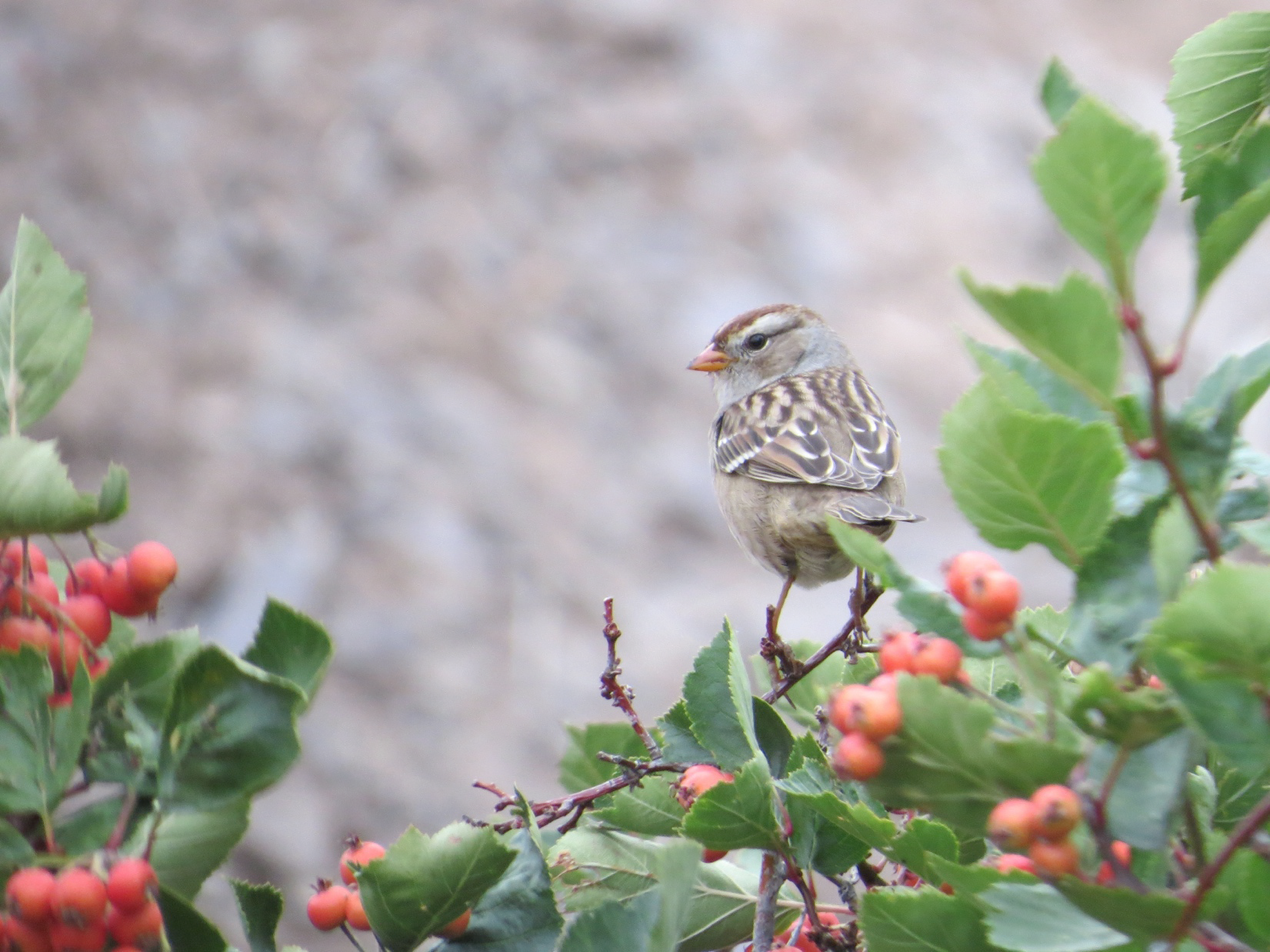 Raptor View Research Institute- Raptor Trapping and Counting
In partnership with Raptor View Research Institute (RVRI), we have projects aimed at both counting and trapping migrating raptors. In the past week, count numbers have increased, with Red-tailed Hawks, American Kestrels, and Sharp-shinned Hawks dominating counts. We share our daily totals on the Hawk Count website. RVRI also maintains two raptor trapping blinds, one on the floodplain, and one on the ridge. In their first week of full trapping, they caught 6 raptors: a Northern Harrier at the floodplain,
and a Sharp-shinned Hawk, two Cooper’s Hawks, and two Red-tailed Hawks at the ridge. 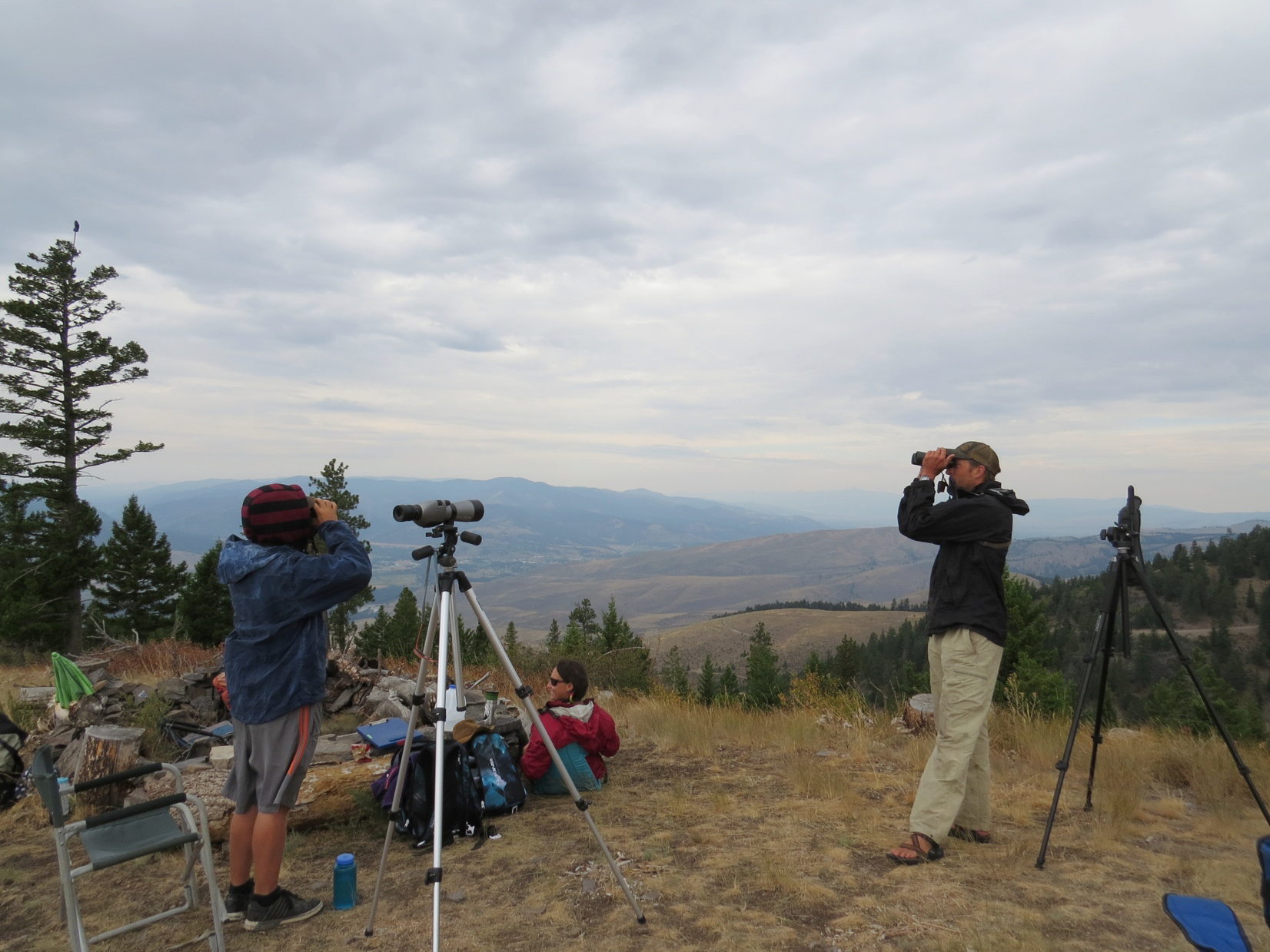 Kris, Amy, and Kerr make up the raptor counting team. 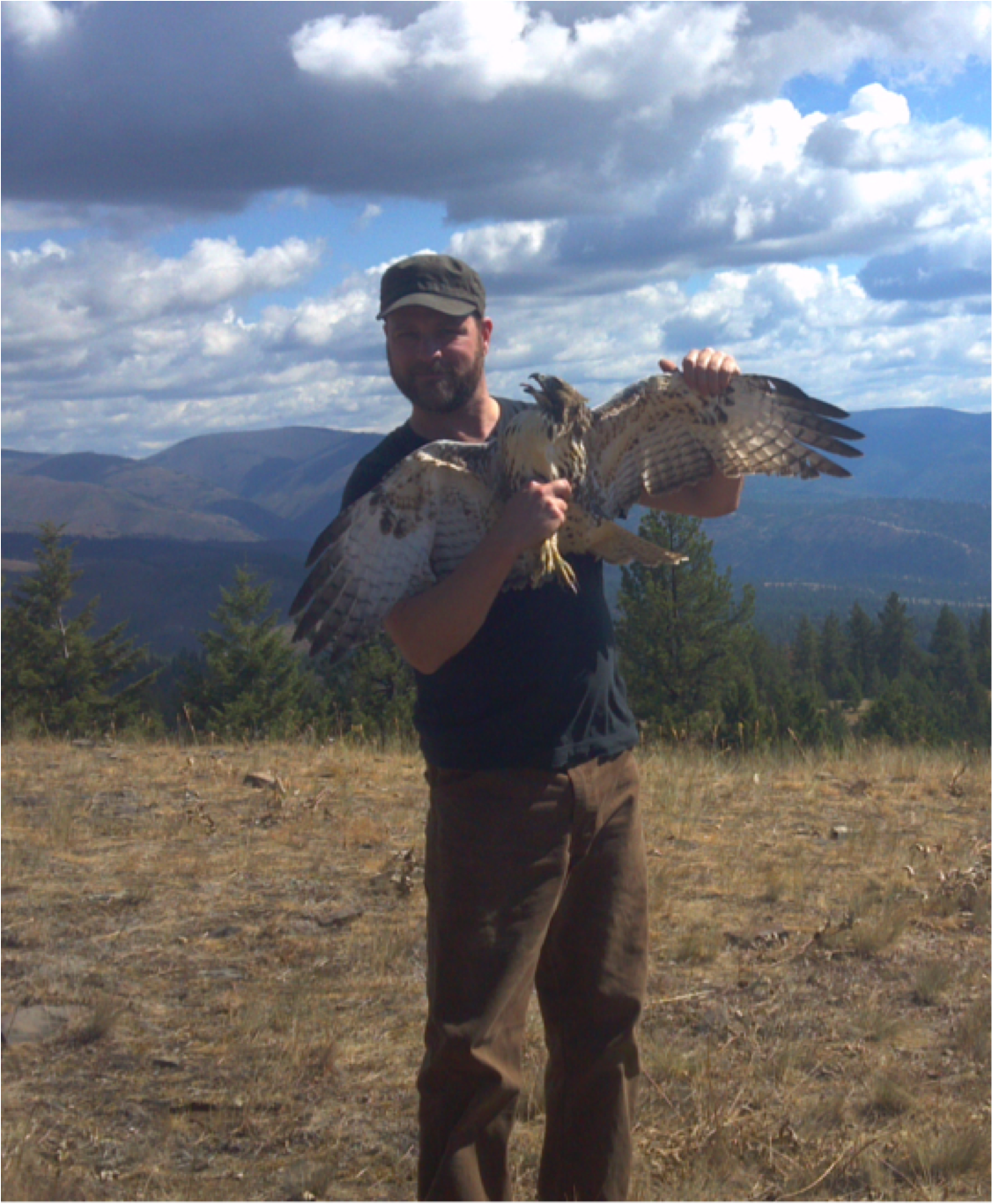 Avian Science Center- Songbird Banding
The University of Montana’s Avian Science Center operates three banding stations during fall migration: a floodplain location, a mid-elevation shrubby draw, and a high-elevation ridge. So far they have captured over 500 birds, with highest capture rates on the floodplain. Some of the interesting species captured include: Nashville Warbler, Wilson’s Warbler, Townsend’s Warbler, Vesper Sparrow, and Lincoln’s Sparrow. This week they began capturing large numbers of White-crowned Sparrows, a species that does not breed on the property. 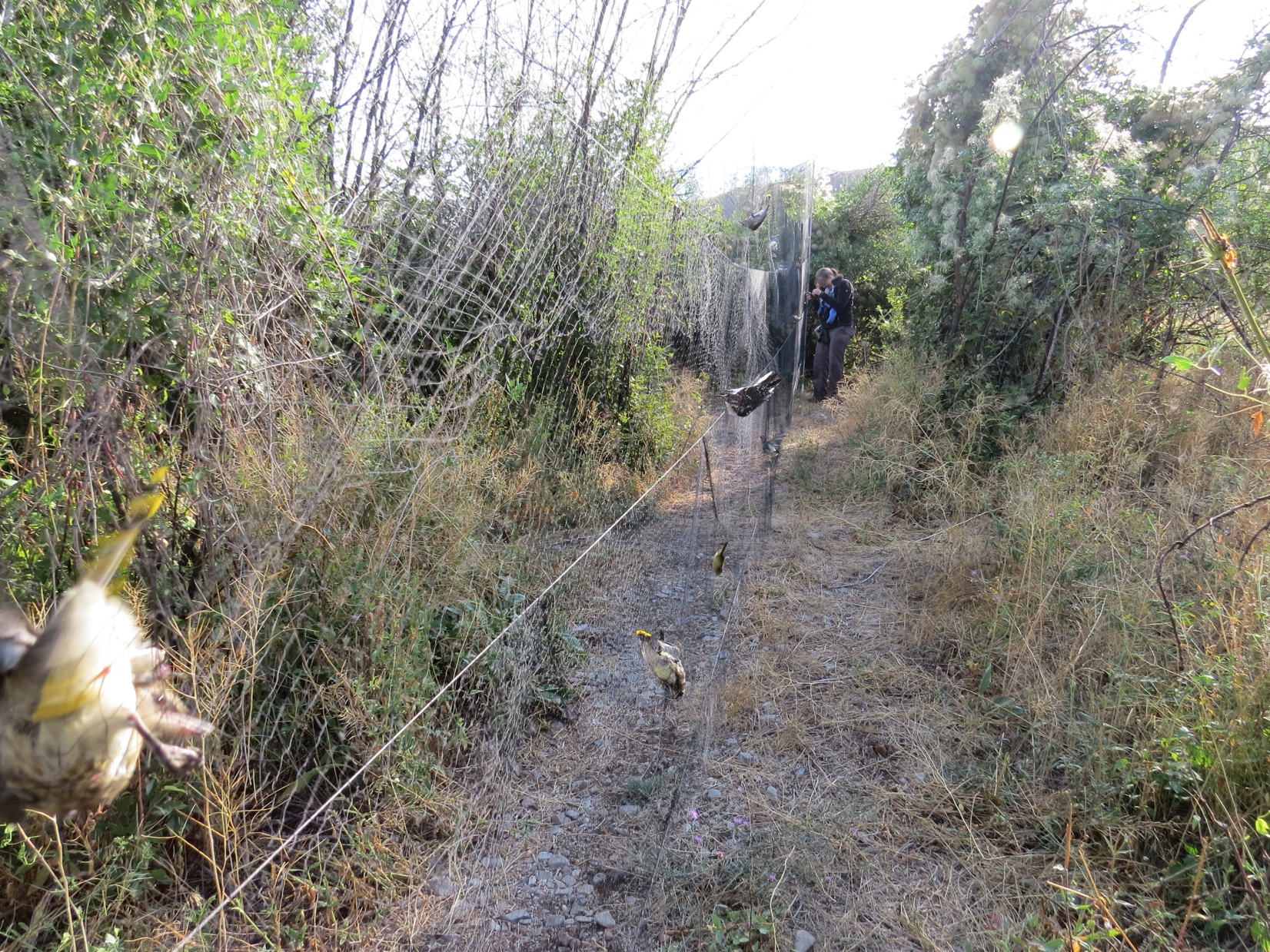 Debbie works to extract the 14 birds caught in this net on the floodplain. While most captures
were Cedar Waxwings, the net also held an Orange-crowned Warbler, a Hairy Woodpecker,
and a Chipping Sparrow. 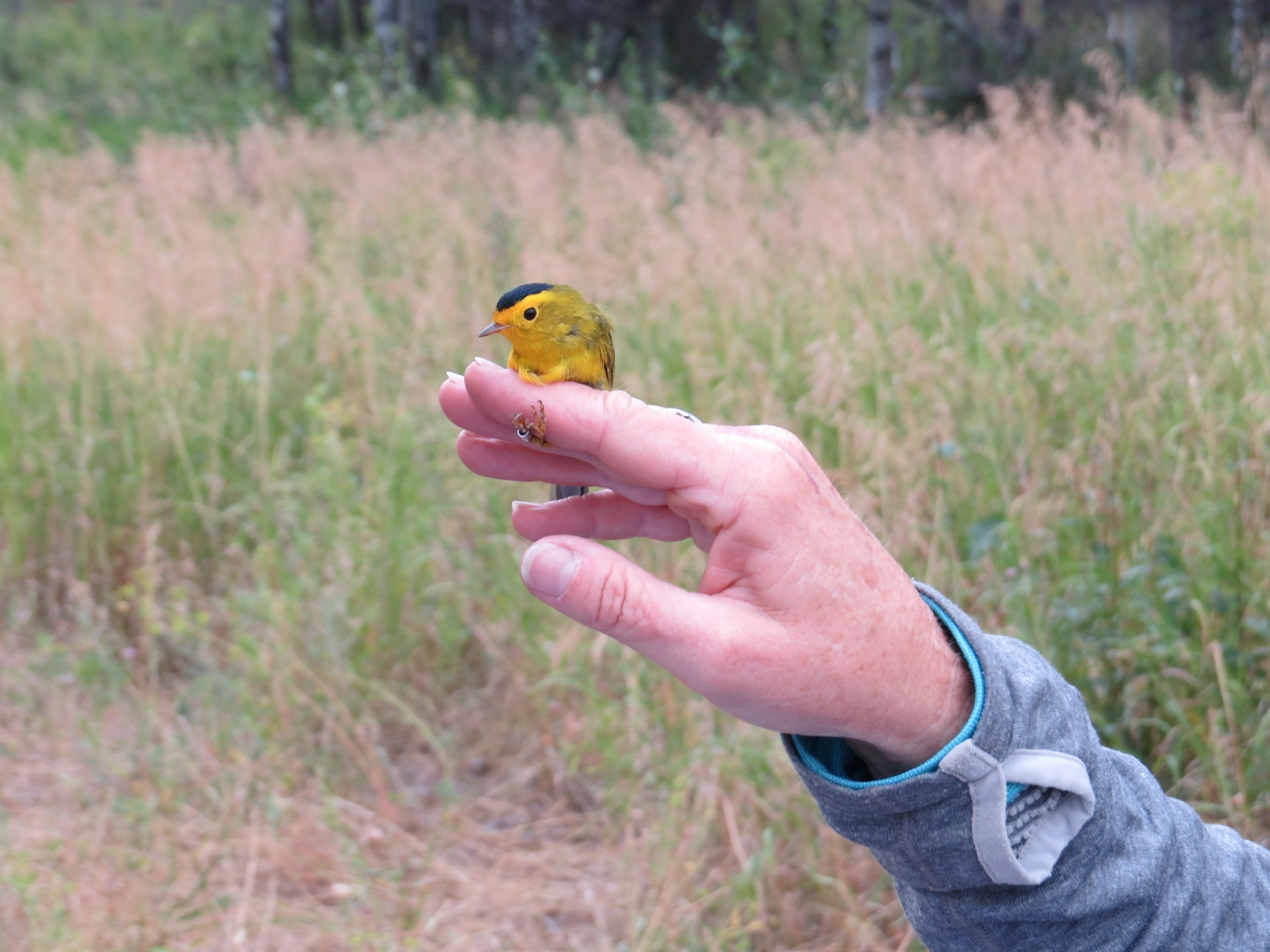 A male Wilson’s Warbler was an uncommon migrant captured by the Avian
Science Center.

By: William Blake and Kate Stone