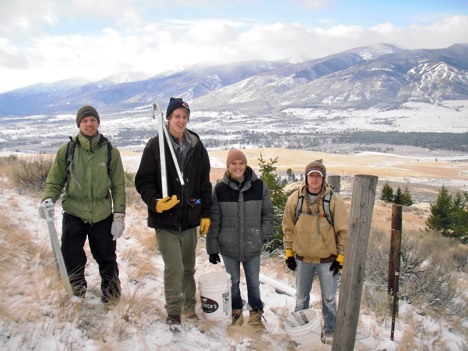 Four hearty volunteers braved winter’s sudden arrival on December 7 to begin round 3 of fence removal at MPG. On this final day of fence removal for the season, we returned to the slopes of Mt. Baldy to pull metal t-posts and coil barbed wire. This work day proved the most difficult this year, but spirits remained high. Volunteers continue to impress me with their hard work and cheerful attitudes.

I scheduled this work day during a warm spell two weeks ago when I thought the Bitterroot Valley would remain in an endless shoulder season. Then the snow came, and on this day it came in sideways. No one minded at all; the views from the work site compensated for the difficult weather conditions. We looked out over the Bitterroot Mountains, and watched a storm creep into the valley. 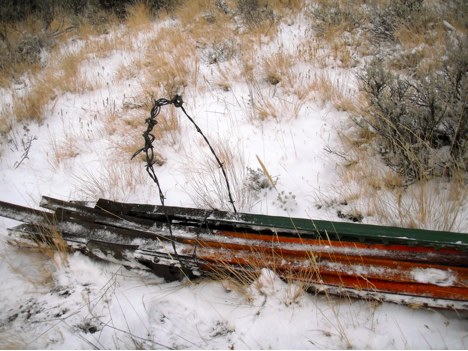 Volunteers bundled the t-posts and made handles out of barbed wire to drag the posts out. 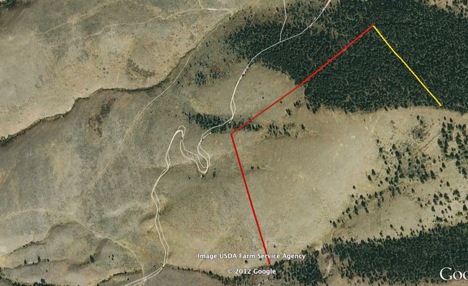 The red line shows where we removed all fence posts and wire. Some fence materials remain on the ground along the yellow line.

We were glad to find that the ground remained soft enough to allow easy removal of the t-posts. We left a line of the posts lying on the mountain side and moved into the thick forest above us to remove the barbed wire. With some difficulty we pulled and coiled wire on the steep terrain, but the volunteers continued to meet the challenge. One volunteer followed the fence when it turned straight up the mountain. He returned with a giant coil and a tangled mass of wire that caught in the trees and brush. We dragged it out, despite the fact that it snagged on everything in its path. 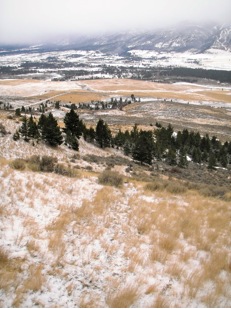 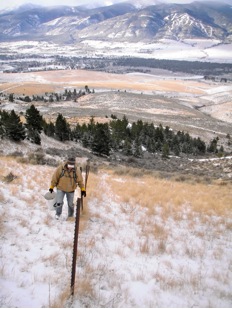 After wrestling the wire down to the road, we needed to carry all the metal posts down the mountain too. As we stood there and thought of devices we didn’t have that would make the task easier, one of the volunteers suggested that we use some barbed wire to bundle the posts, make handles, and drag the bundles out. The handles helped, and with some effort we managed to get all the barbed wire and posts down to the road and loaded in the vehicle. Our workday ended just in time, as the storm we noticed earlier started to snow on us in earnest.