Plants live in tight association with microbes, especially belowground where fungi and bacteria live on and inside the roots of plants.  The relationship can be beneficial or harmful to the plant.   Some microbes cause plant diseases by decomposing roots.  Others trade nutrients with the roots in return for sugars produced aboveground by leaves.

We investigate two main aspects of the relationship between plants and microbes in the soil.  First, as it pertains to weeds, we want to know if soil microbes can help or hinder plant invasions.  Three highly invasive weeds of contrasting life history strategies; cheatgrass, knapweed and leafy spurge, co-occur with remnants of native plant vegetation.  This creates a unique opportunity to observe, characterize, and manipulate interactions between plants and belowground microbial communities.  We outline a number of short, intermediate and long-term research projects that will significantly enhance our knowledge regarding plant microbe interactions and soil processes, with the overall goal to better understand, predict and counteract plant invasions, and to restore and manage invaded ecosystems.

Second, we seek to understand how the relationship between plants and soil influences the function of ecosystem processes.  Soil microbes are responsible for organic matter decomposition and nutrient cycling between the atmosphere and the land.  On this project we collaborate with the Earth Microbiome Project (EMP).  The goal is to map and understand the diversity of microorganisms in habitats around the world.  We mapped microbial diversity and function across gradients of weed invasions.

Recent studies show that fungi alter how plants interact in a competitive environment and potentially shape entire plant communities. Endophytes increased the competitive ability of native grasses against forbs (Vasquez-de-Aldana et al. 2013), enhanced competitive ability of plants outside their native range (Aschehoug et al. 2012), and reduced growth of nearby competitors (Shipunov et al. 2013). In May, we collected Poa secunda plants from fifteen different locations to determine if certain endophytes help P. secunda to persist in a competitive environment. We sampled from areas categorized as native, cheatgrass-invaded, knapweed-invaded or leafy spurge-invaded. We used culture-based methods to isolate the endophytic species within the plants and categorized them based on observed physical characteristics (identification by morphotype).

164 different fungal isolates grew from P. secunda tissue. Their variability in form made categorization into morphotype groups difficult. As one of the most species-rich taxonomic groups, researchers estimate that less than 7% of endophytic species have been described to date (Schmit et al. 2007). To overcome these barriers, we developed a database to organize the different morphotypes observed. With the application FilemakerGo installed on an iPad, we cataloged the physical characteristics of each fungal isolate at 10, 20 and 30 days growth to capture variation over time. Image 2 shows a screenshot of the database and the different characteristics measured.

Morphological characteristics vary between species, and a single isolate’s morphology changes as it grows. Image 3 shows isolates after one week of growth on the left and the same isolates after two weeks growth on the right. Comparisons between the same species at different times can lead to an over-estimation of the total number of morphotypes found. 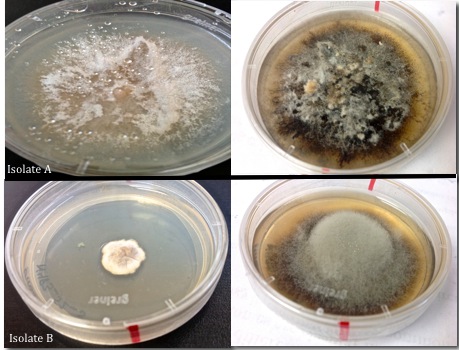 We will develop similar endophyte databases for bitterbrush, cheatgrass, and other plants of interest. We can then compare these records and put each isolate into its respective morphotype group for more efficient sequencing and species identification. Once finished, this database will also help us to explore the differences in fungal community composition between sites and species.

4. Vasquez-de-Aldana BR. 2012. An Epichloe endophyte affects the competitive ability of Festuca rubra against other grassland species.