By: Mike McTeeResearcher
and Kate Stone
Research Methods:
Image classification
Scavengers love eating wobbly organs and the flesh that hunters leave in the woods. In fact, many scavengers rely on such carrion. That’s why Kate Stone and I posted a flier on Facebook last month that asked hunters for a favor. We wanted them to put game cameras on the gut piles and carcasses they left in the field. This would help us learn about the role that hunters play in the ecology of scavengers.

Three hours later, my phone buzzed with a text. “Hey man, I’ll carry a camera to put up,” my neighbor wrote. “I’ve always wanted to do that.”

As our project built momentum, we realized that much of the local hunting community shared my neighbor’s enthusiasm. It’s easy to be excited when your gut pile could feed golden eagles that breed in Alaska and overwinter in Montana, or maybe a grizzly bear that strayed from its core range to eat worms on a golf course.

But before we began distributing cameras to the public, we put cameras on gut piles at MPG Ranch. The cameras consistently photographed magpies, which may not thrill readers, but the magpies may have helped lure in other more charismatic scavengers, like this golden eagle. 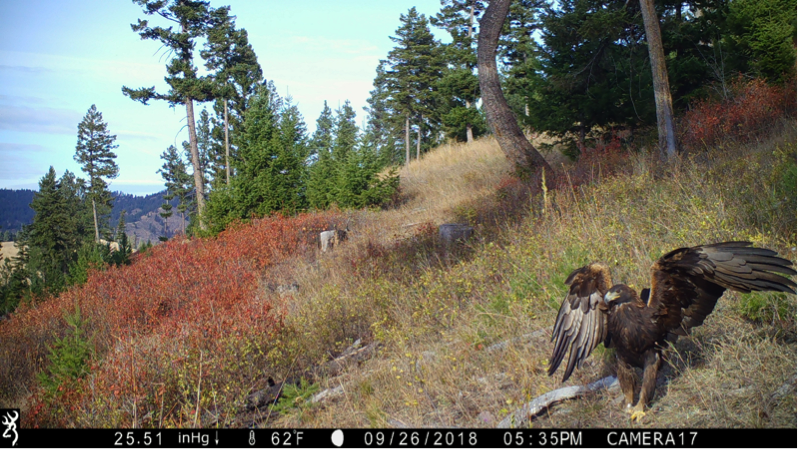 A pair of golden eagles fed on this elk carcass for at least two days. Photos from the second day revealed a metallic band on this eagle’s right leg. 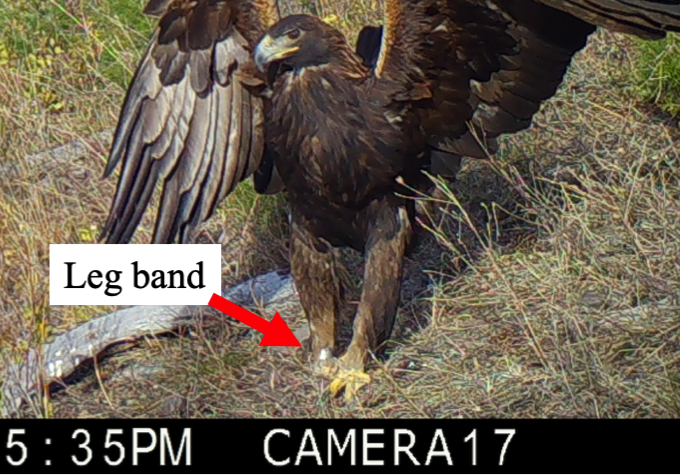 Numbers that identify the bird are etched into the band. Can you see the numbers? Neither can we. That is why our colleagues at Raptor View Research Institute put vinyl wing tags on some of the eagles they catch. The tags are blue and highly visible, so when an eagle feeds on a carcass monitored by a camera, we should be able to identify it and learn about its history. Some eagles are equipped with GPS transmitters and you can see their movements on our Raptor Tracker. Any hunter who photographs one of these tagged birds with a game camera earns a prize!

Between visits by the eagles, a black bear covered its face in organ juice and sucked down the remains. 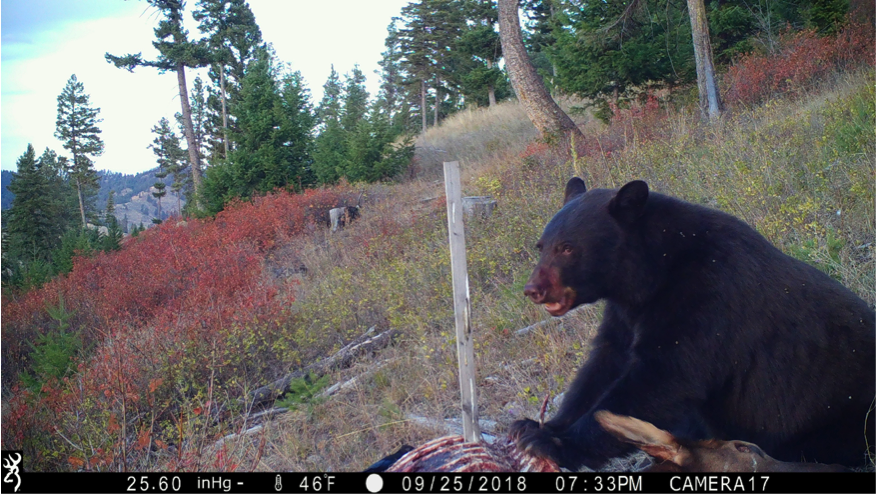 Miles away and a month earlier, an eagle arrived before a black bear too. Here, a juvenile bald eagle visited sagebrush country for an evening snack. 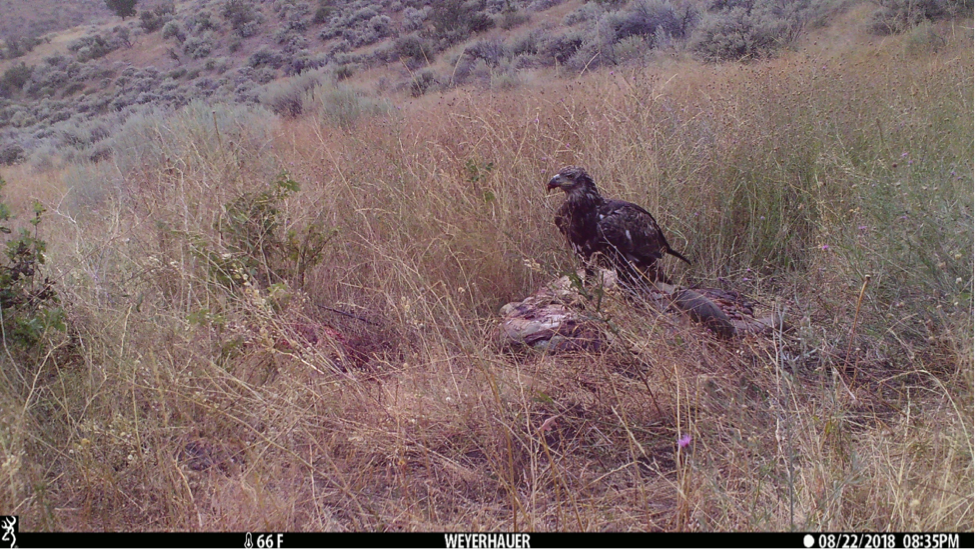 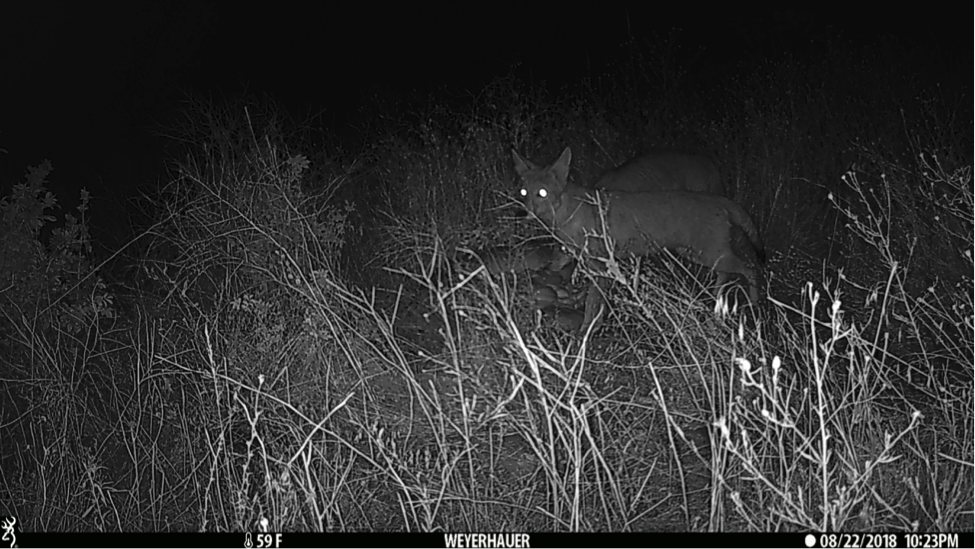 Then, of course, the bear… 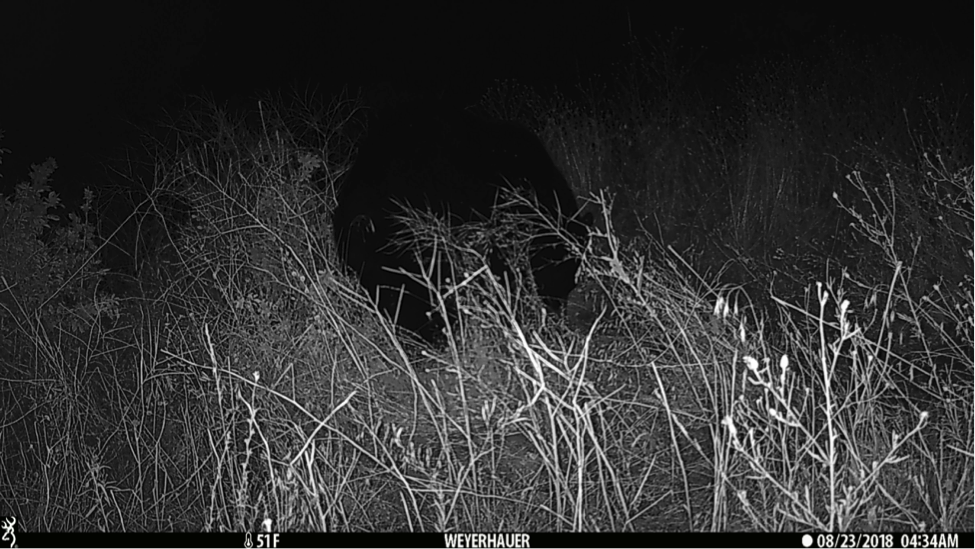 In the morning, magpies searched for scraps. Each gut pile that we monitored at MPG Ranch disappeared within a week. 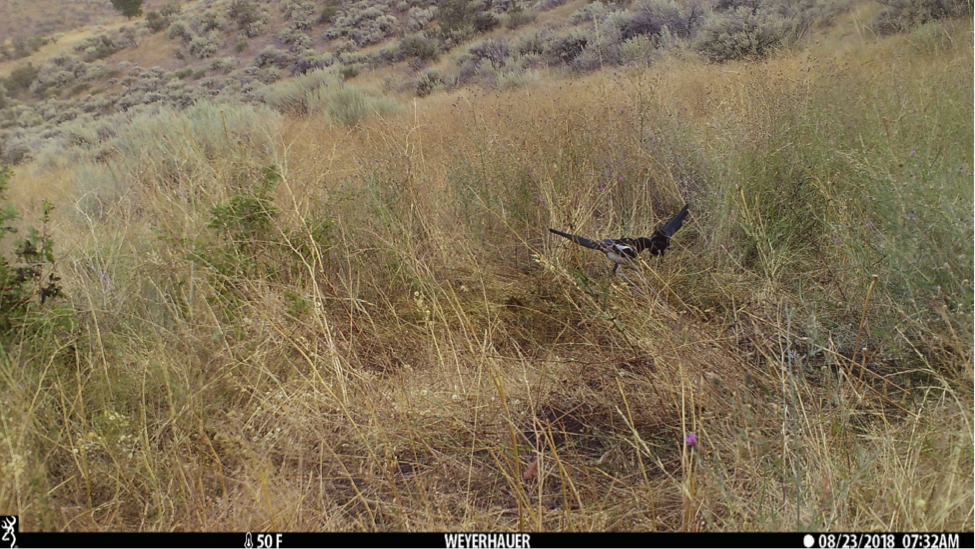 One of the first cameras deployed by a public hunter caught a coyote peering towards the camera. Afterwards, the coyote and its buddies dragged the carcass away towards privacy. 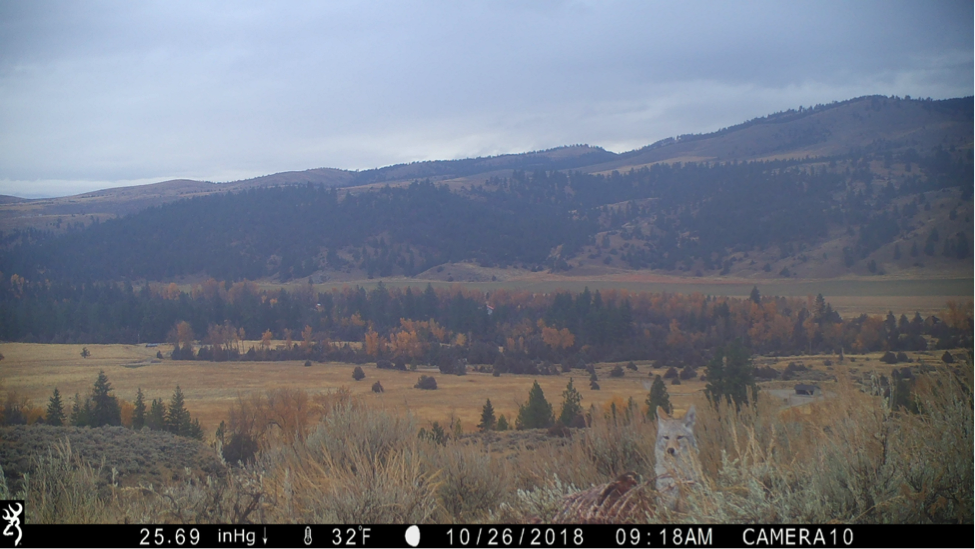 One hunter legally dumped his butchering scraps onto a brush pile on his property. A skunk searched through the remains the first night. 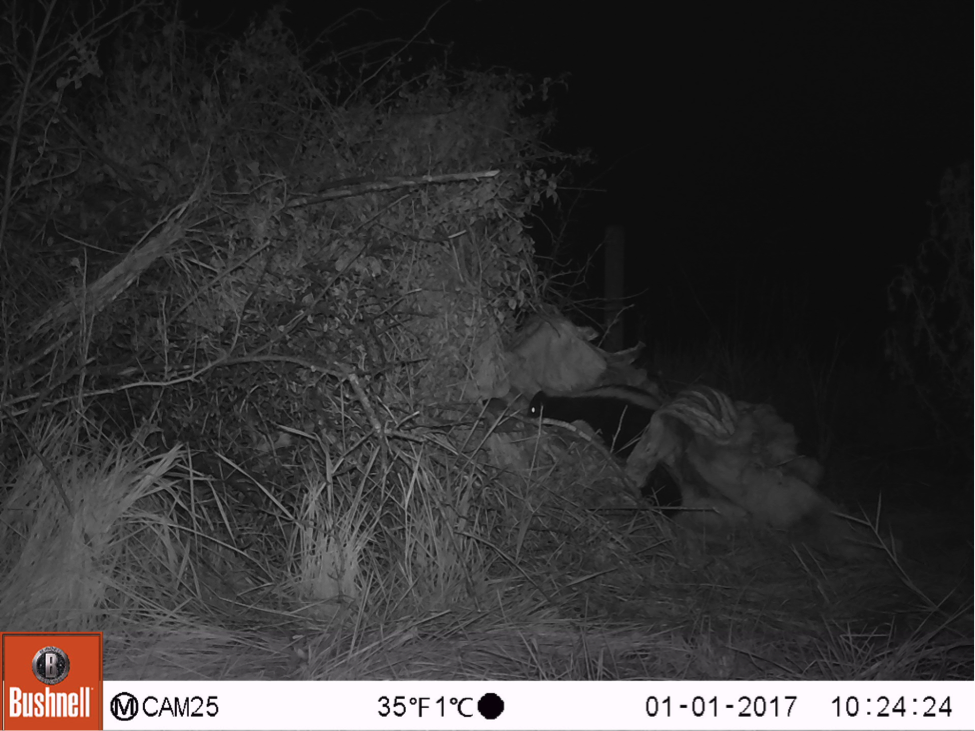 While a pair of raccoons clawed their way into the scraps the second night. 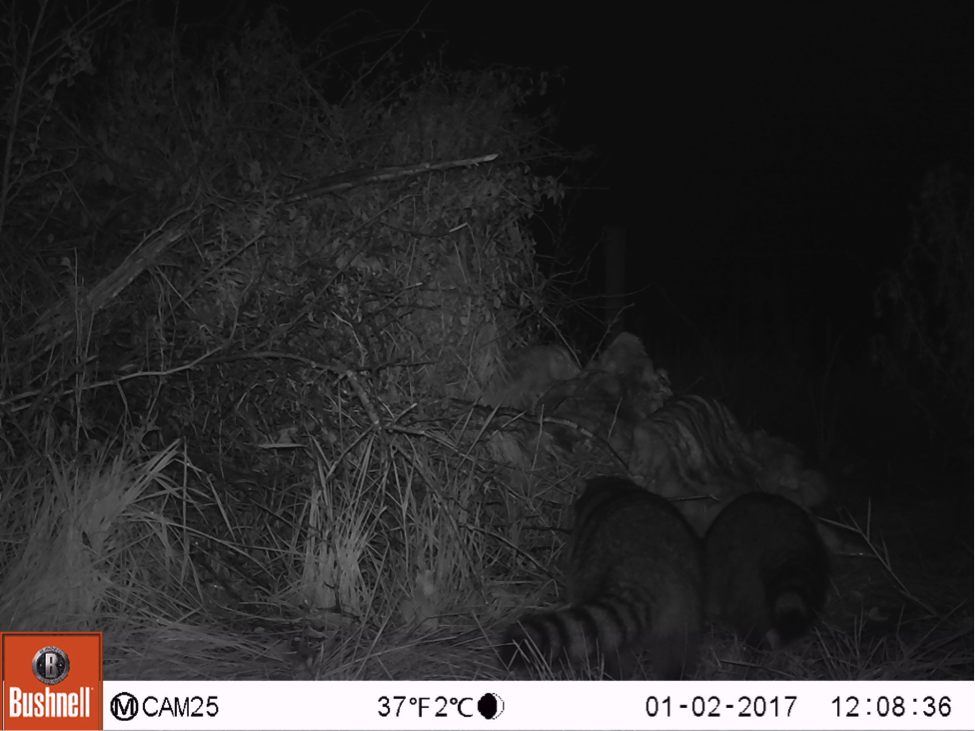 But before the camera captured the skunk and raccoons, it photographed one of the least appreciated scavengers of all: The domestic chicken! 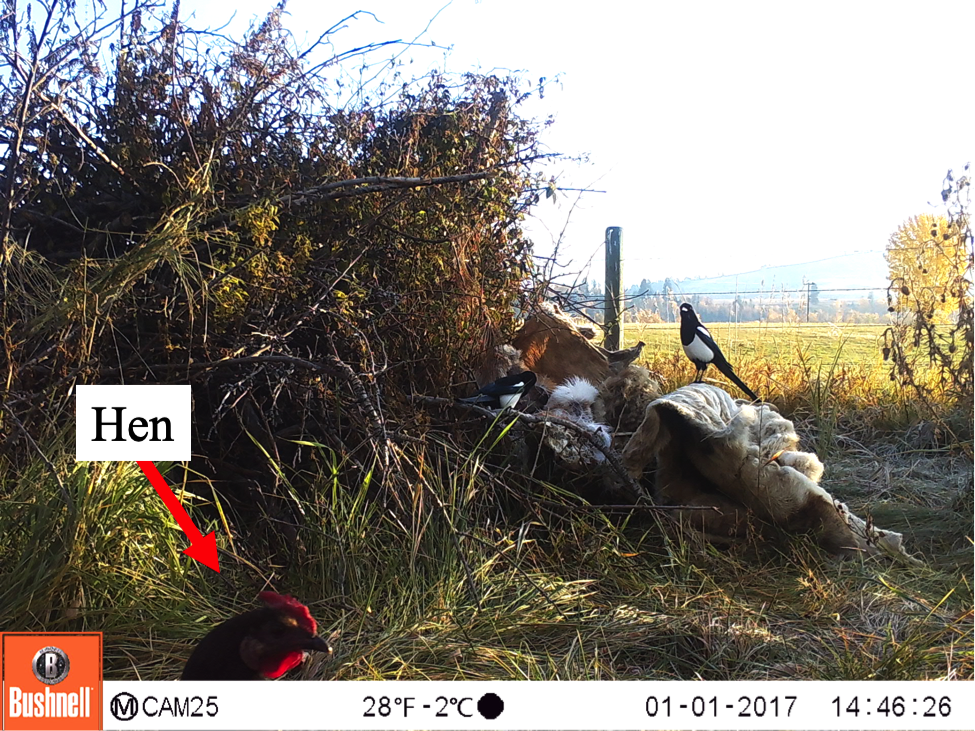 If you would like to see or share what eats the gut piles and carcasses you leave in the field, feel free to contact us at scavengers@mpgranch.com .