Debbie Leick confirmed that short-eared owls nest on the ranch. Several people have glimpsed short-eared owls this spring, but brief encounters and the presence of similar sized long-eared owls made identification uncertain.

On a songbird survey, Debbie saw an adult short-eared owl dive-bomb a coyote. Later, when she returned to the area, she found a ground nest tucked into the bitterbrush. The nest contained four downy owlets and one unhatched egg.

Short-eared owls usually live in open habitats and hunt during the day more than most owls. Like many ground-nesting birds, their nests are vulnerable to predation by coyotes, foxes, and birds of prey. 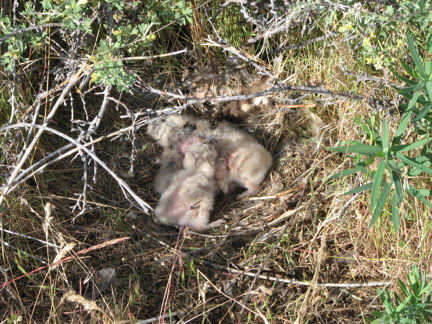