Raptor surveys are underway. We are posted on Baldy Mountain seven days a week. Eagles, hawks, and falcons are the focus, but we are also counting other migrating birds.

The first week was cold. Snow was falling, and the winds were strong. Golden Eagles, Red-tailed and Rough-legged Hawks were the top birds. They are able to fly in strong winds. The ridges that border the Bitterroot Valley were shrouded in clouds, bringing many of these early-season migrants over the MPG Ranch.

Our high count this week was 56, on March 24th. We recorded an early Turkey Vulture on the 18th. We saw our first Cooper’s Hawk and Northern Harrier at the end of the week. As the weather warms, we anticipate more of these species. 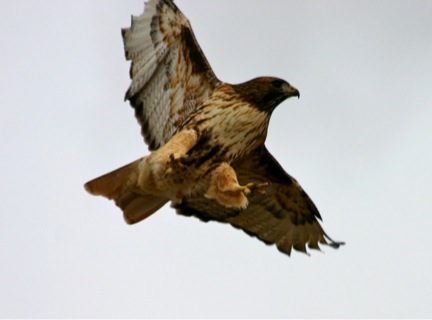 This week the majority of migrant Red-tailed Hawks were adults.

We are updating daily results on HawkCount.org, which is a project of the Hawk Migration Association of North America (HMANA). Hawk count sites across the country can be found on their website. The link to our count is: https://www.hawkcount.org/month_summary.php?rsite=723&ryear=2013&rmonth=03&sec=prevm

Big Days at the End of Fall Raptor Migration