Plants live in tight associations with microbes who colonize their roots and leaves and surrounding soil. Some microbes are harmful and cause disease while others are beneficial and aid in plant nutrient uptake, decomposition of organic materials, protection against pathogens, tolerance against drought and other stressors. Plants can influence microbial communities and vice versa with consequences for the growth of individual plants, the composition of plant communities, and entire ecosystems. In our work, we focus on three main aspects of plant-microbe interactions; 1) how they may aid or hinder plant invasions, 2) how their function changes across environmental gradients, and 3) how they may both cause and prevent disease in plants.
On MPG Ranch, three highly invasive weeds of contrasting lie history strategies (cheatgrass, knapweed and leafy spurge) co-occur with remnants of native plant vegetation. Using both observational and experimental approaches, we seek to understand how these weeds alter microbial communities and how this influence invasive success, ecosystem properties and restoration. We also collaborate with researchers from across the world to learn if plant-microbe interactions differ between native and invasive ranges and how this correlates with evolutionary shifts in plant genomes and biogeographical distribution of plant associated microbes.
Outcomes of plant-soil microbe interactions depend on the particular plant and fungal species and surrounding environmental conditions. To explore this context-dependency, we use high-throughput sequencing and stable and radioactive isotopes in surveys and experiments to determine if the proportion of fungal guilds (mutualistic mycorrhizal fungi and potential pathogens) change with water and nutrient availability and how these changes relate to plant growth. Because most research occurs in single locations, the generality of findings across locations that differ in environmental conditions is often unknown. To address this, MPG Ranch is part of two global research collaborations, Nutrient Network (https://nutnet.org) and DroughtNet (www.drought-net.org). In these experiments, all researchers apply nutrients, remove herbivores, expose plants to drought, and record responses in both plant and microbial communities using the same protocols, which allow for direct comparisons across sites.
The invasive fungal pathogen, Cronartium ribicola, causes the disease commonly known as blister rust in all nine white pine species native to the United States. As one of the only labs in the world to grow C. ribicola in culture, we perform tests of pathogen metabolism when exposed to compounds produced by other fungi found in white pine needles. Greenhouse experiments inoculating trees with these fungi, as well as beneficial ectomycorrhizal fungi, explore how we can improve tree growth and disease resistance. We also use isotopes and controlled field experiments to determine how blue-stain fungi carried by bark beetles can influence wood decomposition in forest ecosystems. As warming climates increase the frequency of bark beetle outbreaks worldwide, this research will help to better estimate future forest carbon storage and release.
Research Methods:
Greenhouse experiments, Root viability

Fungi are heterotrophic organisms and are unable to produce their own food. Instead, they exude enzymes to break down organic material and absorb essential elements, like nitrogen and phosphorus, from their environment. 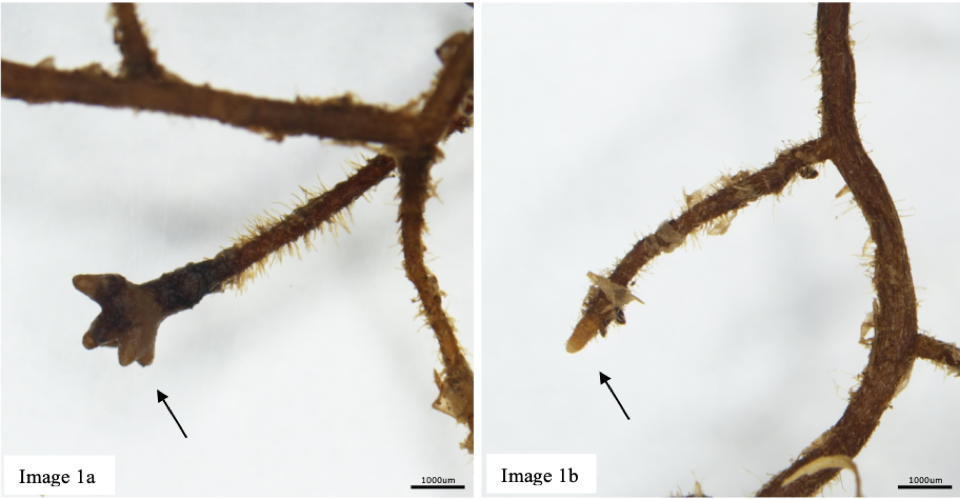 Ectomycorrhizal fungi (EMF) form mutualistic relationships with plant root tips (Image 1a, arrow). They grow a fungal sheath around the root, and from the sheath, hyphae extend into the soil and increase the plant’s access to water and nutrients. In exchange, the plant provides EMF with the carbohydrates they need to survive. Uncolonized root tips (Image 1b, arrow) lack a fungal sheath and the benefits that EMF provide.

In September 2019, a small subset of western white pine seedlings from the DGRC experiment were harvested to evaluate the effectiveness of our EMF inoculations earlier this year (above). The seedlings were sent to Dr. Peter Kennedy’s laboratory at the University of Minnesota, where they performed the initial processing and assessment of root colonization. 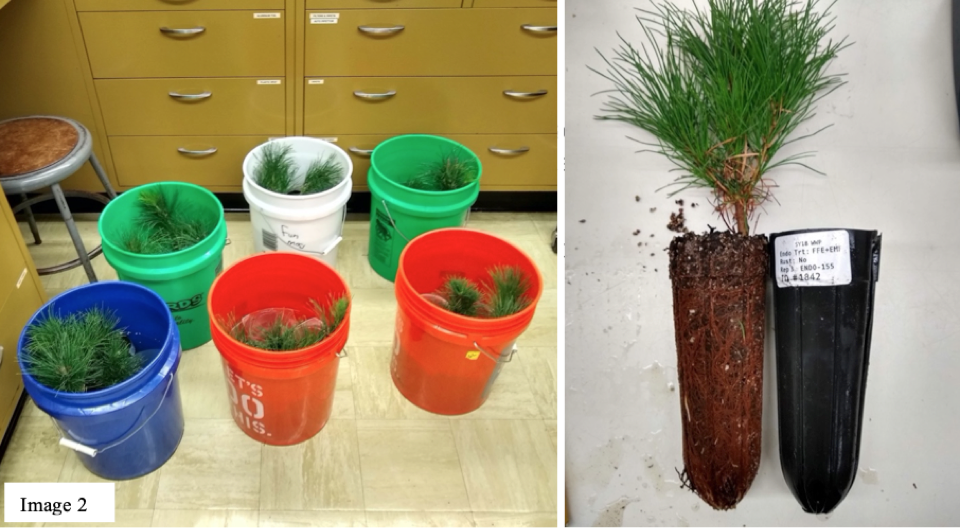 After arriving at Dr. Kennedy’s laboratory, the seedlings were soaked overnight in water, removed from their containers, and evaluated for EMF colonization (Image 2, photos by Peter Kennedy).

The seedlings had a large number of roots and contained thousands of individual root tips. 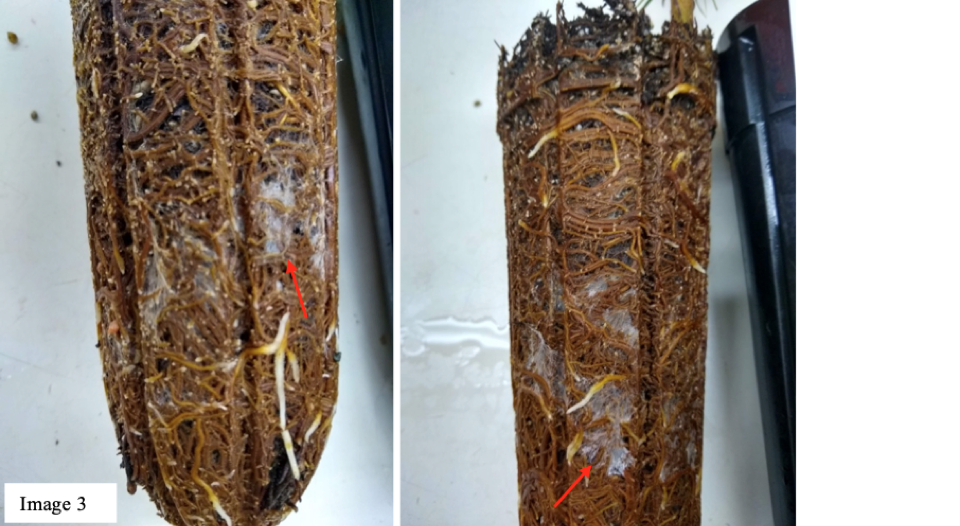 White cobweb-like fuzz was observed on some seedlings. The fuzz is hyphae from inoculated ectomycorrhizal fungi that have colonized the roots (Image 3, arrows, photos by Peter Kennedy). 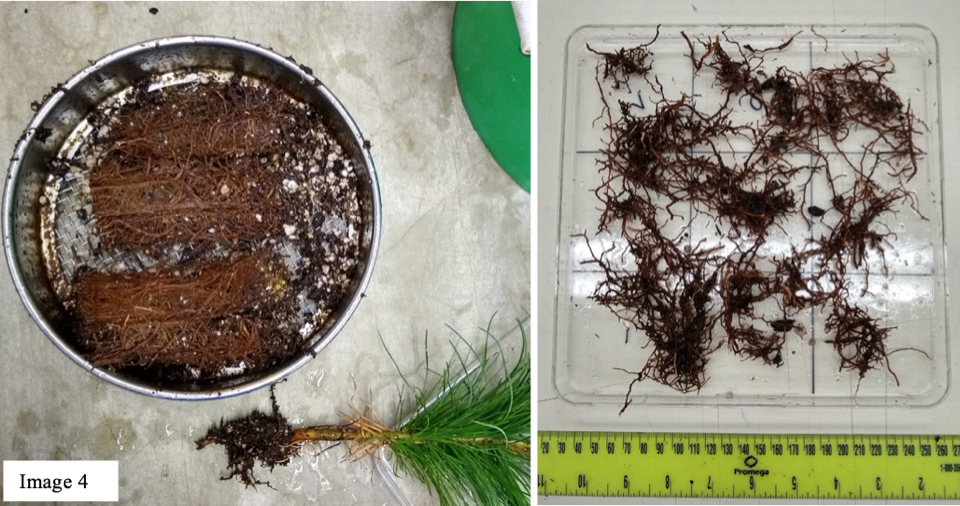 Each root system was cut into multiple pieces and rinsed with water to remove the soil. A portion of the roots were randomly selected for EMF quantification (Image 4, photos by Peter Kennedy). We will ‘score’ the roots by counting the number of colonized root tips. This will allow us to estimate the percent colonization of the ­­root system for each seedling. We will relate this data to disease severity next spring.

Emily graduated from Montana State University in 2016, earning a B.S. in Biological Sciences with a concentration in Conservation Ecology & Biology and minor in Statistics. While in school, she spent time at MPG Ranch capturing and monitoring painted turtles.

After finishing her degree, Emily worked as a microbiology intern at MPG where she prepared samples for DNA sequencing and cultured fungi from plant tissue. Upon completing her internship, Emily transitioned into her current role as a laboratory technician where she assists with projects relating to plant-fungal interactions, natural history, and light microscopy.
Outside of work, Emily enjoys reading, fishing, and riding her horses across Montana’s beautiful landscape.

By: Emily Martin and Lorinda Bullington