On Friday, 9/21, participants in our Bird Migration Celebration field trip witnessed an unusual bird flying over our raptor observation site. One of the visitors first called the bird to the group’s attention. Raptor Counter Eric Rasmussen quickly got it in the spotting scope. Its flight pattern looked falcon-like. As it moved closer, Eric noticed its owl-like facial disk, unlike any hawk. But it also had an unusually long tail for an owl. Northern hawk owl!!

The northern hawk owl flew right over the observers, made a few passes at the great horned owl decoy, and then continued flying south. 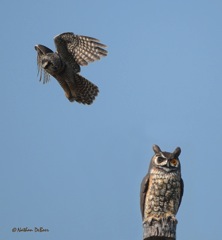 This observation represents a first for the Bitterroot Valley. In Montana, most northern hawk owls breed in the northwestern part of the state, in and around Glacier National Park. People occasionally see them in other areas, but usually in low numbers in the non-breeding season.

Many thanks to field trip participant Nathan DeBoer for photos of the northern hawk owl. 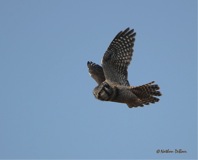