The spring raptor migration survey has come to an end. There was a significant drop in numbers this week. We counted 139, with only 18 on the last two days combined. Weather was favorable, so we feel our end date is representative of the bulk of migration. This years total is 2,237. See the table of our 2012 survey is for a comparison.

A season highlight is our count of 36 Swainson’s hawks. Compared to last year this number nearly doubled. The landscape on and around the ranch could be suitable for breeding Swainson’s. Though we have not confirmed a nest, we have seen them on MPG during the breeding season.

It was exciting to see broad-winged hawks, which breed in Canada and are uncommon to see in our area. This year we counted 8 more than last year, with a total of 11 (including one dark morph).

American kestrel and Golden Eagle numbers were similar to last year. Nearly 200 rough-legged hawks flew over the ranch, compared to 167 in 2012.

In addition to raptors, we counted 11,391 migrant birds, representing 53 species. Some of these include: 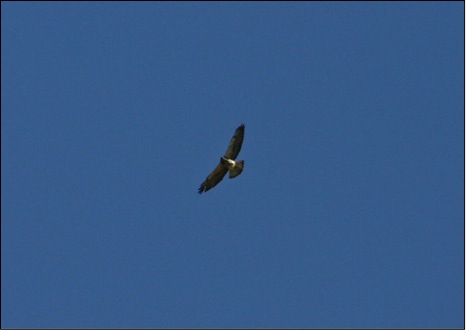 This Swainson’s hawk’s flight allowed for a good look. Two-tone wings, which taper to a point, help identify this hawk from others in the Buteo family.