Research Methods:
satellite telemetry
Meet Relish! She’s an adult Bald Eagle who winters in the Bitterroot Valley. We banded her in January 2019, outside of Hamilton, Montana, where she received a satellite transmitter and colored leg band #57. 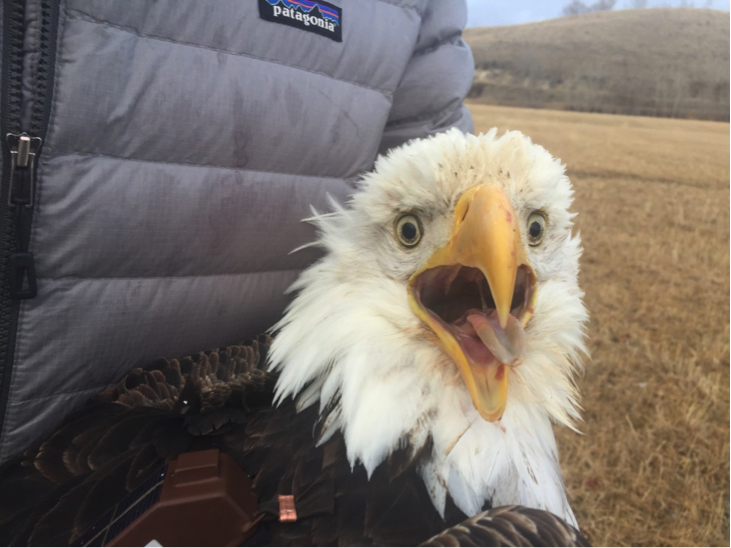 Bald Eagle “Relish” prepares for release after receiving her satellite transmitter on January 18, 2019, outside of Hamilton, Montana.

Come spring, we waited curiously to see if she would migrate or nest in the Bitterroot Valley. To our excitement, Relish headed north in March 2019. She spent the summer near the mouth of the Mackenzie River, west of Great Slave Lake in Northwest Territories, Canada, more than 1,060 miles from where we banded her! Throughout the summer, she held a tight territory along the river, suggesting she possibly attempted to breed, although we could not be sure without field observations. 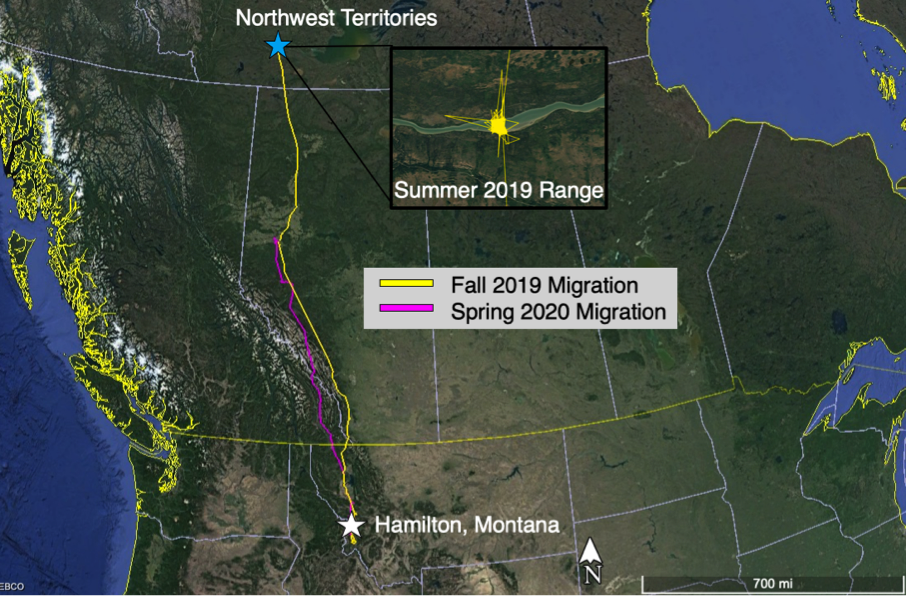 Relish summered in a small area along a river in Northwest Territories, Canada (inset), before beginning her return journey toward Montana.

Relish began her southward migration on October 27, flying over 200 miles in one day and crossing into Alberta. She continued south, navigating along the Peace, Smoky, and Simonette Rivers, occasionally stopping for a couple of days to presumably fish and rest. By November 26, she passed west of Calgary, more than 700 miles from where she began her fall migration. 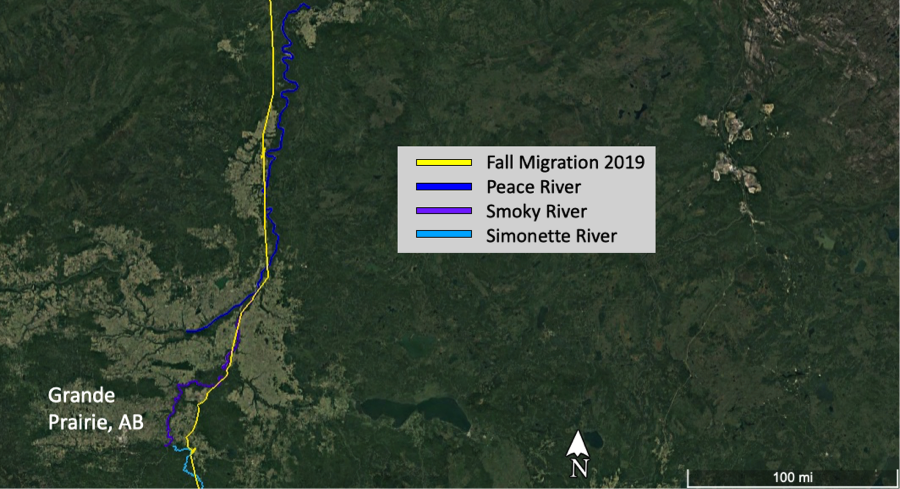 By December 1, Relish made it within 100 miles of Canada’s border with the U.S. She then soared west over the continental divide at La Coulotte Ridge and into British Columbia. Three days later, she entered Montana and headed south along the Flathead River. She passed Missoula on December 21 and soon arrived in the Bitterroot Valley. Following the Bitterroot River, she flew past MPG Ranch in Florence and spent New Year’s Eve between Corvallis and Hamilton. Almost one year after she was banded and after a 2,100-mile round trip voyage, she returned to Hamilton in January 2020. 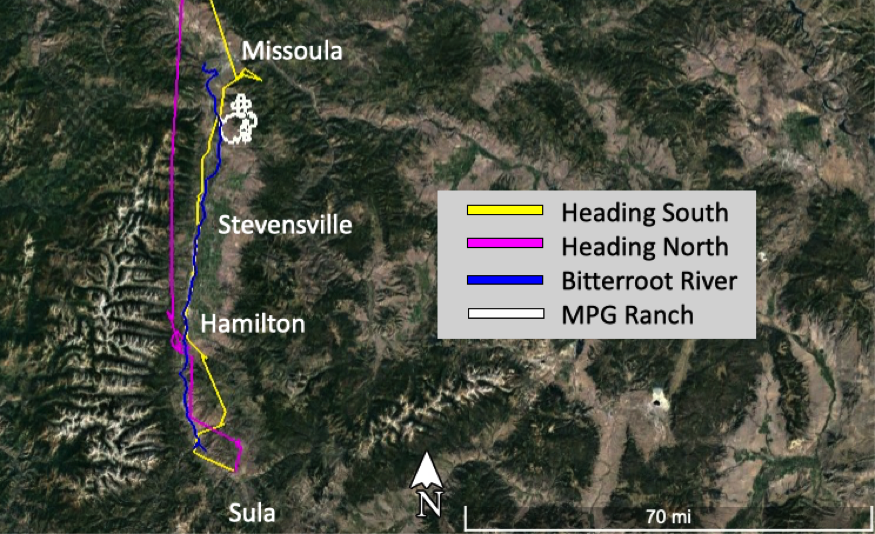 Relish continued her southerly migration just past Hamilton to Sula Peak, her southernmost destination. She spent a few days outside of Sula before starting north again toward Roaring Lion Creek southwest of Hamilton. Then an exciting moment happened: a trail camera spotted her! 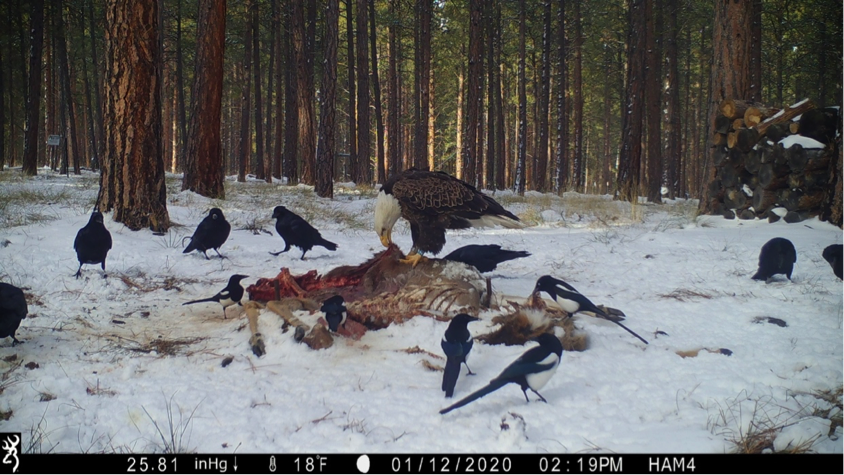 Relish feeds at a camera station set up for the Bitterroot Valley Winter Eagle Project outside of Hamilton, Montana, on January 12, 2020. Her satellite transmitter and colored leg band are visible in the picture.

But her story gets better. Less than a week after being caught on the trail camera, a landowner photographed Relish at the same camera station in Hamilton where we had banded her exactly one year prior. 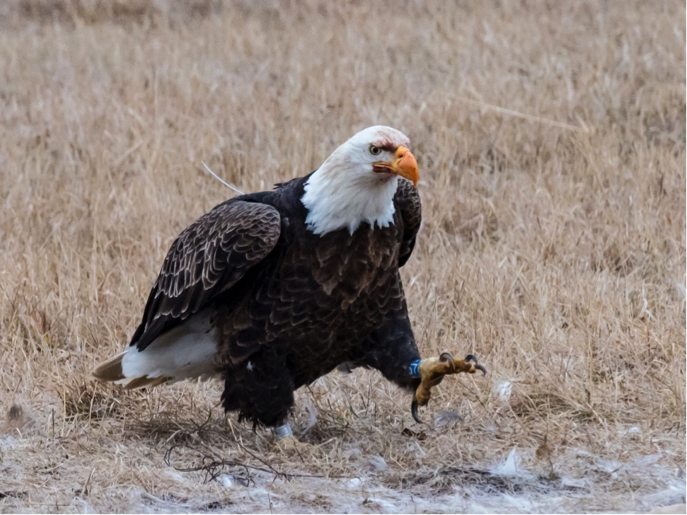 Relish feeding at the same camera station where she had been banded precisely one year ago, on January 18, 2020, outside of Hamilton, Montana. Photo courtesy of Barb Garten. 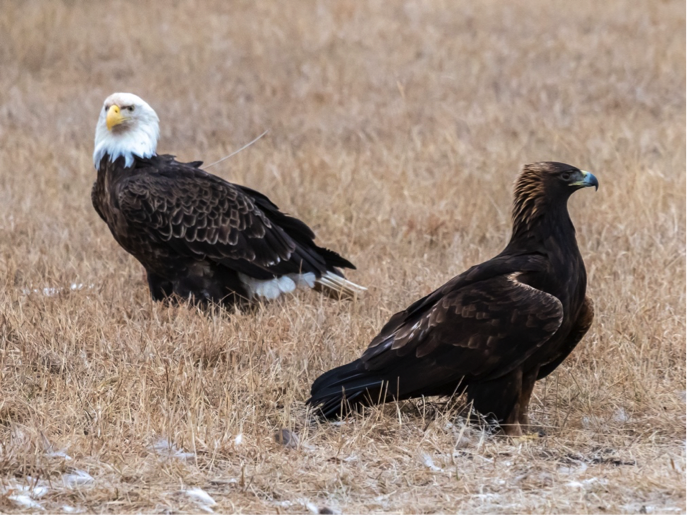 Relish sitting near a Golden Eagle at the camera station outside of Hamilton, Montana, on January 18, 2020. Photo courtesy of Estelle Shuttleworth.

Relish continued making appearances. Only a few days later, she showed up near Lost Horse Creek on another camera station associated with the Bitterroot Valley Winter Eagle Project. 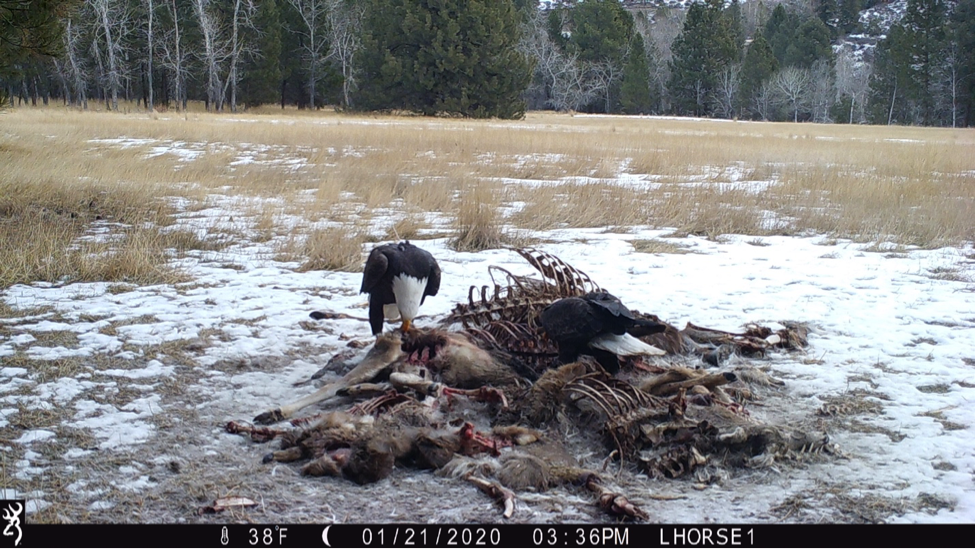 Relish feeds with another Bald Eagle at a camera station set up for the Bitterroot Valley Winter Eagle Project near Lost Horse Creek on January 21, 2020.

In less than 10 days, we had three encounters with Relish in the Bitterroot Valley. These observations are thrilling, considering she spent the breeding season up in Northwest Territories, Canada!

Relish didn’t spend much time in the Bitterroot Valley, though. On February 4, about a month and a half after she arrived, she began her northward journey. Relish navigated along the same rivers she did in the fall. She crossed into Canada on February 17 and followed the Kootenay River to traverse the continental divide at Vermillion Crossing. A week later, she reached the Smoky River just east of Grande Prairie in west-central Alberta, where she has been hanging out for about a month. At this point in her journey, she is only 400 miles from where she spent last summer. Will she continue north to the Mackenzie River in Northwest Territories? Or, will she surprise us by doing something different? We’ll find out soon. For now, though, we’ll watch her movements with excitement and curiosity to see what Relish decides.

If you would like to follow along with Relish’s movements, head to our Raptor Tracker website. It includes updated tracks from all of our eagles with satellite transmitters, including Relish.