Research Methods:
bird banding, blood sampling, carcass trap, satellite telemetry
A Bald Eagle surveys the half-frozen Bitterroot River for fish, but how long will the bird stay in the valley before moving on? A Golden Eagle cruises the snowy ridges of the Sapphire Mountains looking for a carcass, but which scavengers must it fend off before it feeds?

We are answering those questions with the Bitterroot Valley Winter Eagle Project. This collaborative study among Raptor View Research Institute, Bitterroot Audubon, and MPG Ranch studies eagles during a season where their natural history is not well understood. We are using auxiliary color markers, satellite transmitters, and trail cameras, to grow our knowledge of eagle behavior and how they use this western Montana landscape in the winter and beyond. 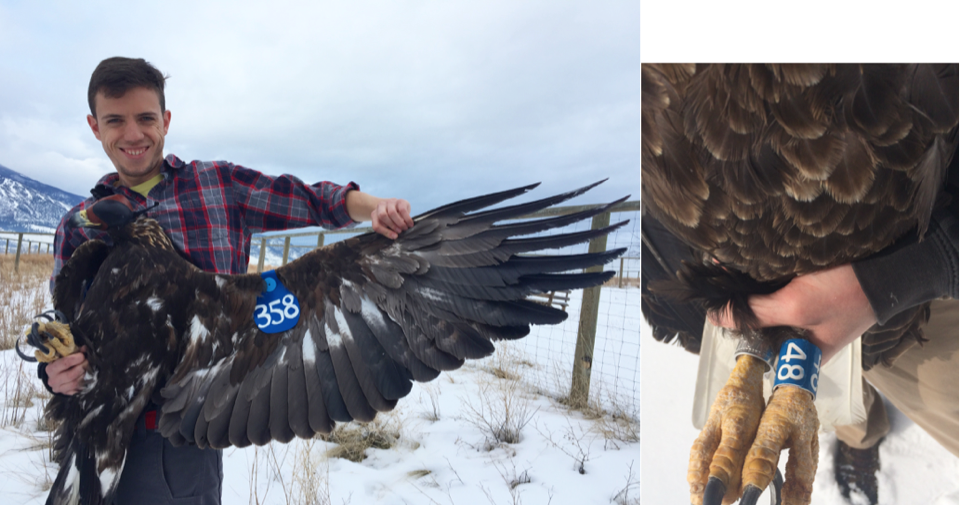 We equip some Golden Eagles with wing tags (left) while Bald Eagles may receive a color band (right).

Capturing Eagles­
The Bitterroot Valley is an ideal place to study Golden and Bald Eagles. Both species congregate here in the winter, and they comprise a combination of northern migrants and year-round residents.
In the winter, eagles opportunistically scavenge carcasses, so we use roadkill deer as bait. We have permits to collect this roadkill from the shoulders of highways, and at compost stations run by the Department of Transportation. When an eagle feeds at the bait, trained biologists use remote-controlled net launchers that expand a 20 x 20-foot net to capture the eagle safely. We perform all capturing, handling, and banding of eagles under state and federal permits. 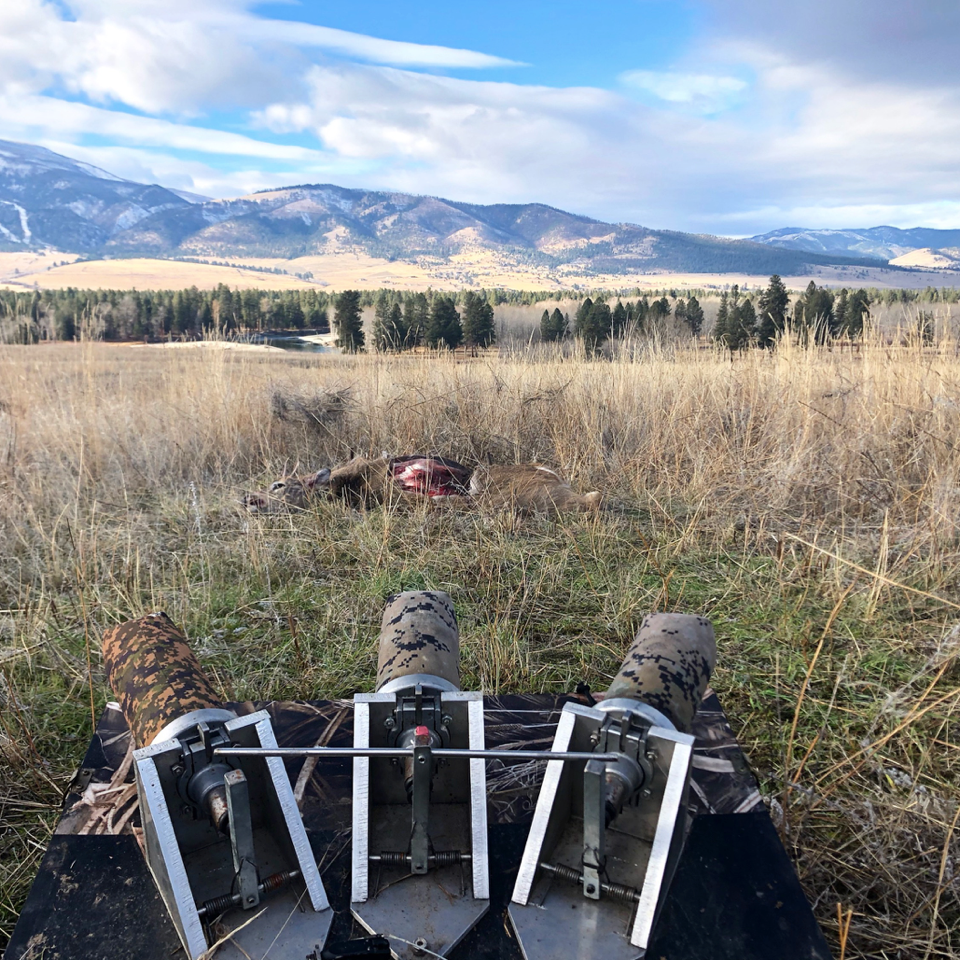 A net launcher helps us capture eagles as they feed on roadkill deer at our bait stations.


Once in hand, eagles receive a standard USGS aluminum leg band that is serially numbered. These bands help researchers identify individual birds in case they are recaptured or found dead. Some eagles also receive colored and numbered leg bands or wing tags. These auxiliary markers increase our chances of identifying individuals without needing to recapture them.

If you have seen one of our marked eagles, please report your sighting to Raptor View Research Institute. Sightings from citizen scientists greatly improve our understanding of these incredible birds.

A researcher releases a Golden Eagle after receiving wing tags at our banding stations on the Rocky Mountain Front (left) and MPG Ranch (right).

Satellite Transmitters
Some adult eagles receive satellite transmitters. We affix these solar-powered units to an eagle’s back using a backpack harness. These harnesses break down over time and fall off unless the bird picks it off first. The units capture upward of 15 GPS locations per day and can send signals for more than five years. We have deployed 14 satellite transmitters for the Bitterroot Valley Winter Eagle Project in the past two years.

After banding, taking measurements, and affixing any markers or transmitters, we safely release the eagles, and they return to normal behaviors.

Biologists deploy wing tag #406 on a young Golden Eagle during its fall migration in 2019 (left). Blood samples are taken from each eagle (right).

Once eagles with transmitters fly away, we await the stream of data points that follow. The data reveal an eagle’s fall and spring migration routes, and where the eagle might breed in the summer and spend its winter. Eagles that migrate long distances demonstrate the importance of habitat connectivity. Resident eagles that spend the entire year locally show the breadth of individual breeding territories, their habitat selection, and provide other insights into eagle behavior. If you are interested in where these birds fly, you can follow along by using our Raptor Tracker. 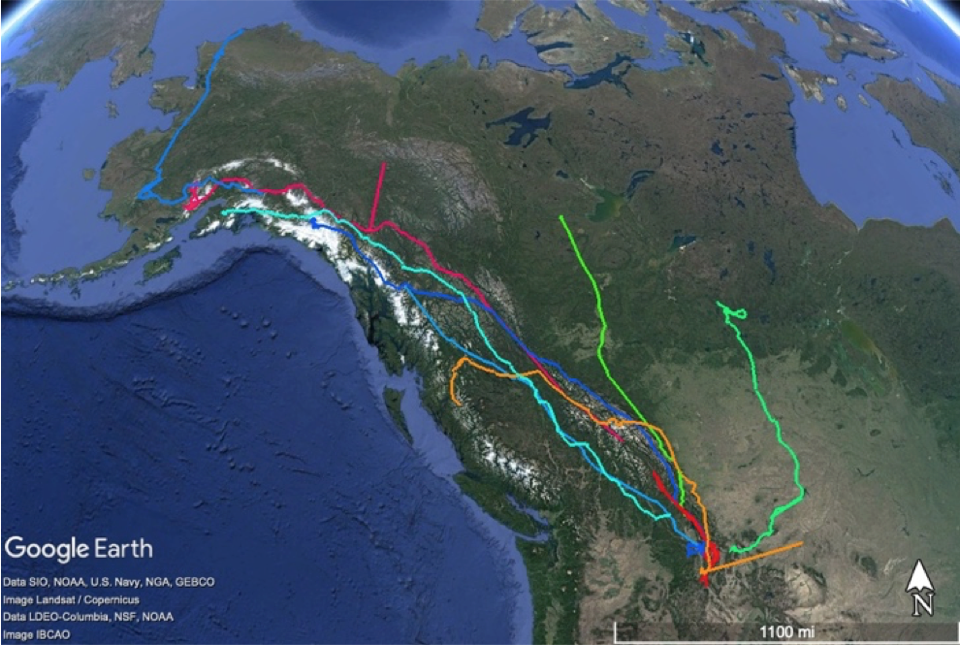 Migration tracks of eagles outfitted with satellite transmitters in the Bitterroot Valley, MT, show that some birds migrate deep into Canada and Alaska.

Using Trail Cameras to Study Eagles
In addition to banding eagles, we also document the behavior of eagles and other scavengers using trail cameras at bait stations. Private landowners voluntarily host these sites from Lolo to Darby, and the cameras record photos of any animal that scavenges the carcass.

We’ve had great success re-sighting marked eagles in our three years of this project, with more than 60 re-sightings. Re-sighting these eagles allows us to track survivorship, travel, and some behavior, including how long they feed on carcasses and how they interact with other eagles. 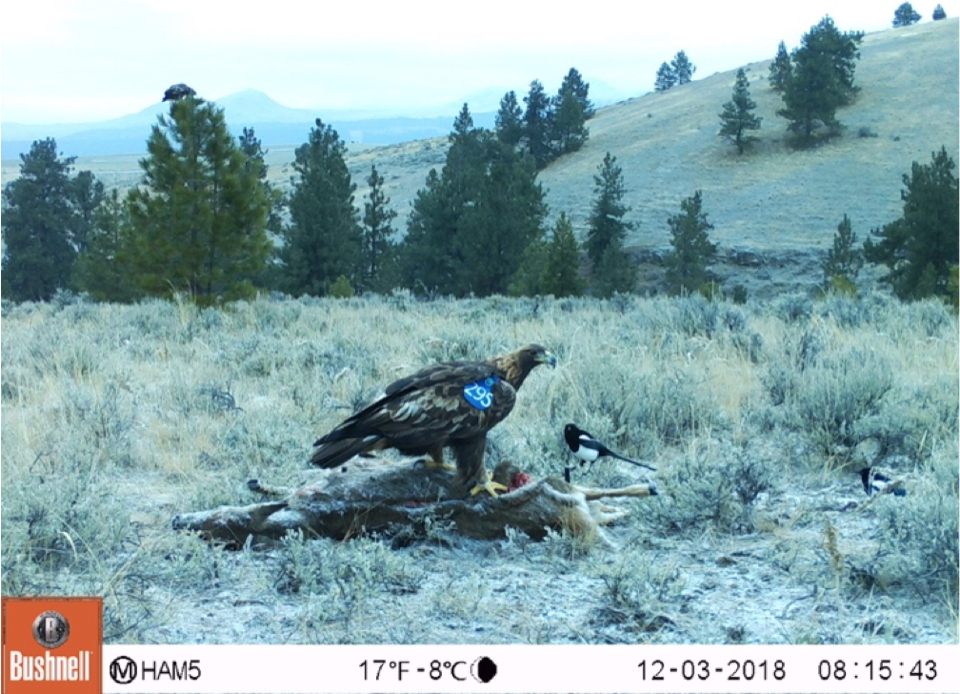 We’ve also documented a range of other scavenging species using private lands in the Bitterroot Valley. They include everything from mountain lions to American martens to Northern Goshawks. 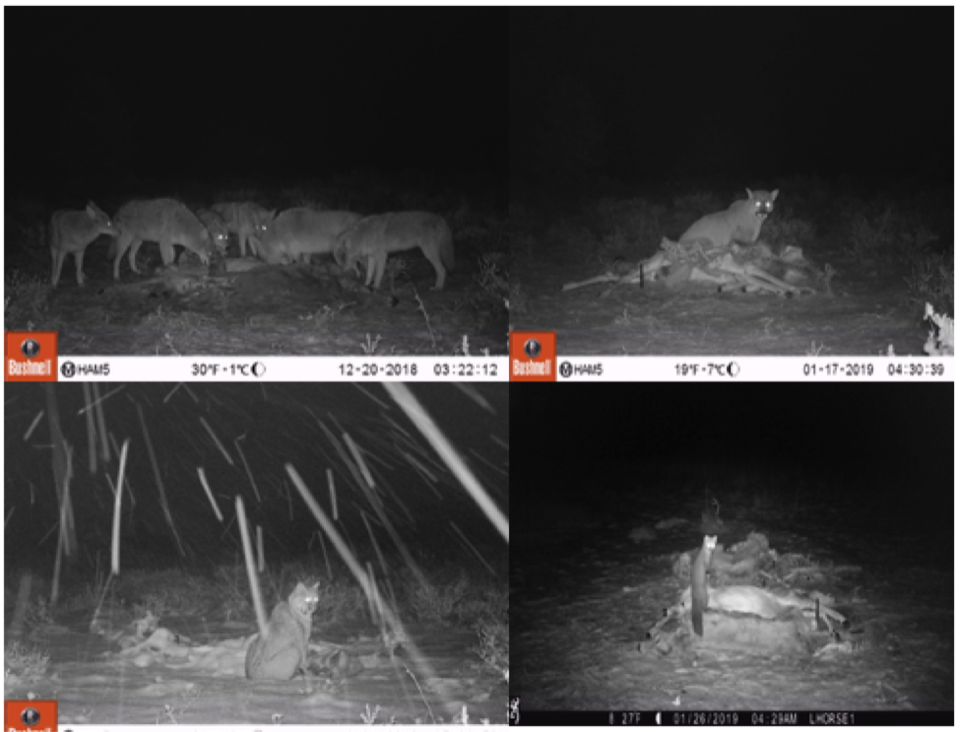 The trail cameras reveal a variety of scavengers at our bait stations.

The project has generated hundreds of thousands of pictures, and we’ve invited the world to help us process them. All photos are posted on the citizen science platform Zooniverse, under the title of Western Montana Wildlife. If you like looking at wildlife photos, please consider going to the site and helping us!

As the winter progresses, we look forward to sharing the results of our field season and other research with you!