In early September, MPG teamed up with researchers at the U.S Forest Service Dorena Genetic Resource Center (GRC) in Cottage Grove, OR, to explore the endophytic communities of five needle pines and their relationship to blister rust resistance. At Dorena GRC, Dr. Richard Sniezko and colleagues screen seedling families of multiple five-needle pine species for resistance to white pine blister rust (Cronartium ribicola). They collect seeds from trees that show apparent resistance to blister rust in their native environment. Often the native collections come from areas of moderate to high blister rust. After 1-2 years of growth, seedlings are inoculated with blister rust spores in an indoor inoculation chamber. Later, researchers at Dorena examine seedlings for the frequency of needle spot and stem cankering caused by the rust pathogen. 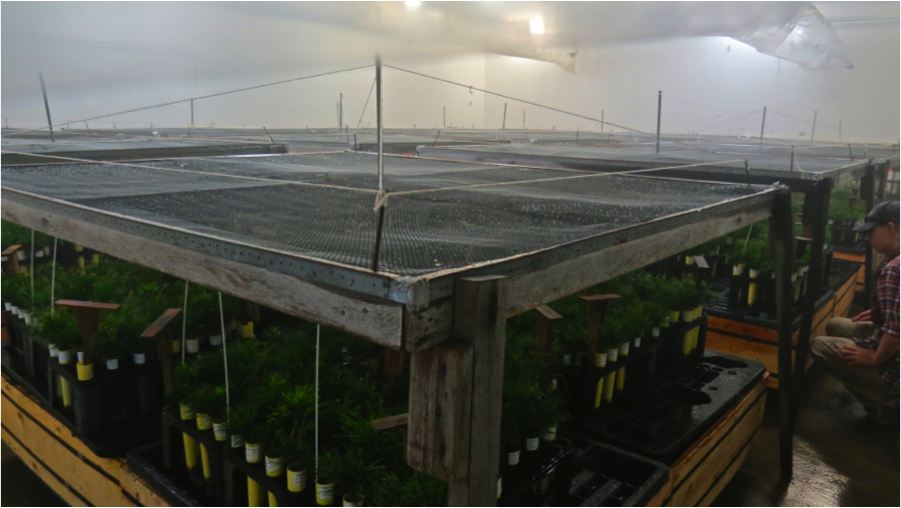 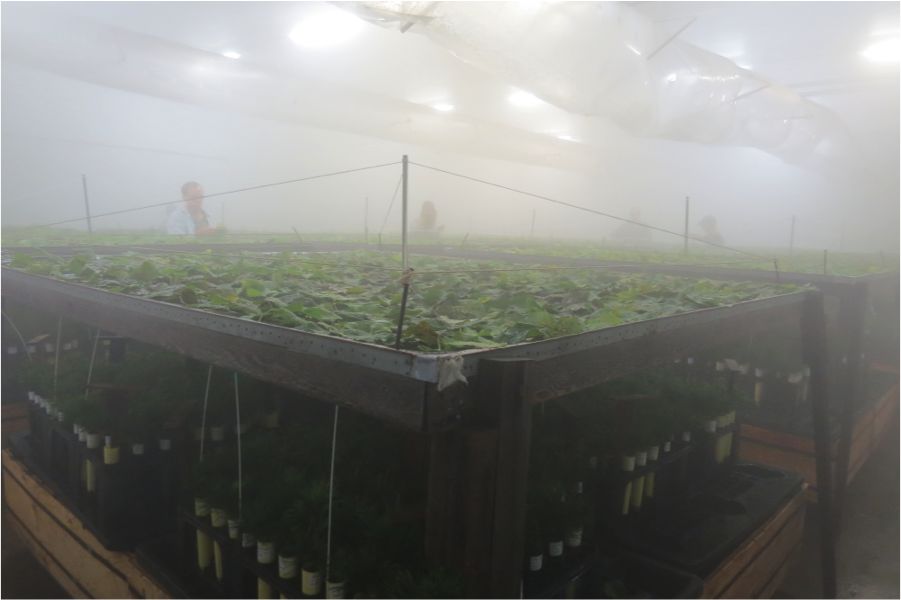 To inoculate seedlings, Ribes leaves infected with blister rust are placed spore-side down on a screen above the trees at 100% humidity (image above). After a few hours, the virulent fungal spores fall onto the seedlings below. A single leaf may contain thousands of spores (image below). 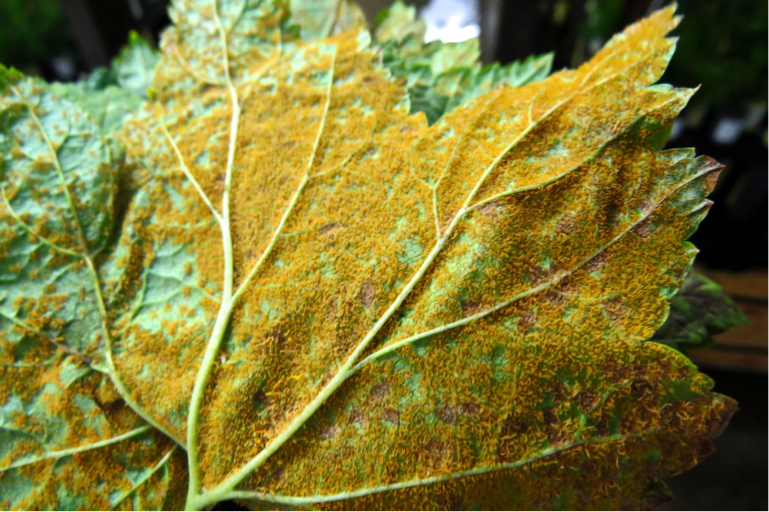 We sampled needle tissue from 20 different families of whitebark pine seedlings in the inoculation chamber (image below), directly before inoculation with blister rust. With next generation sequencing technology we can compare the foliar endophyte communities present in resistant vs. susceptible families from multiple regions in the northwest U.S. We will be able to monitor these communities over time to determine how geographic source influences endophyte community assemblage and if specific endophytes inhibit or increase severity of blister rust infection. 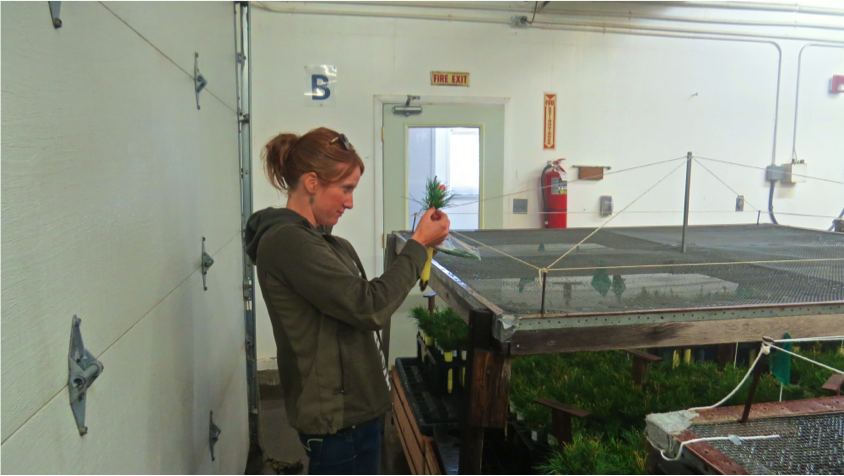 We also collected needle tissue from both whitebark pine and western white pine seedlings sown in 2012 and inoculated with blister rust in 2013 (image below). We used needle spot data to determine which trees appear most resistant or susceptible to blister rust at this time. We will compare the endophyte communities of trees at each extreme. 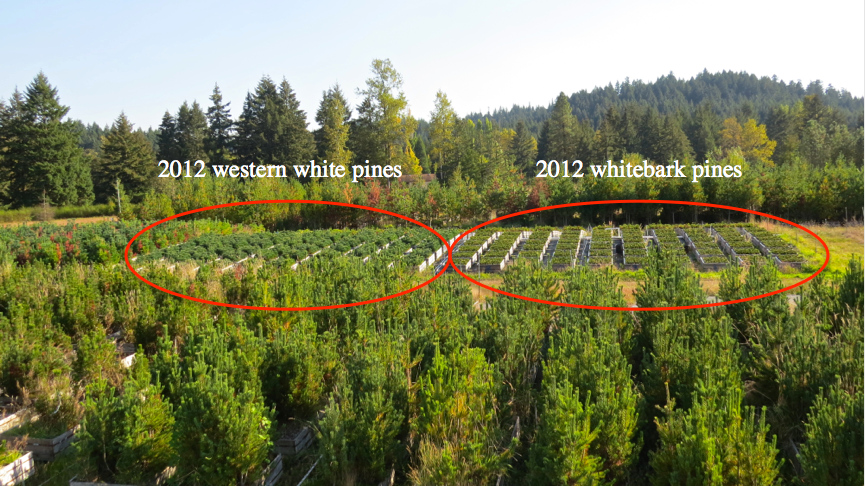 Many western white pines sown in 2010 and inoculated in 2012 already show signs of stem cankering (image below). We used canker data collected last spring to sample needles from trees and families that appear healthy vs. those that show severe systemic infection. 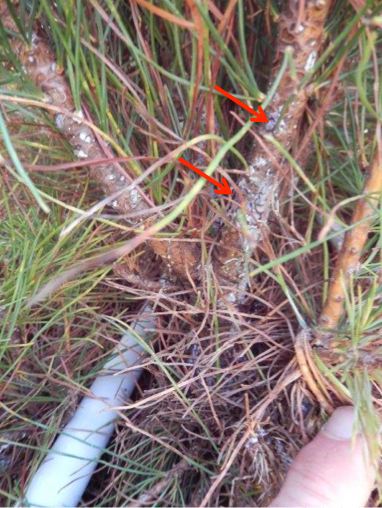 The facilities at Dorena GRC also provide a unique common garden design to compare endophyte communities of different species of five needle pines (image below). We sampled from 2014 needles of sugar, western white, whitebark, bristlecone, southwestern, limber, and eastern white pine trees to look for selection of foliar endophytes based on tree species. The small spacing between each species group suggests exposure to a similar population of fungal endophytes from the surrounding environment. 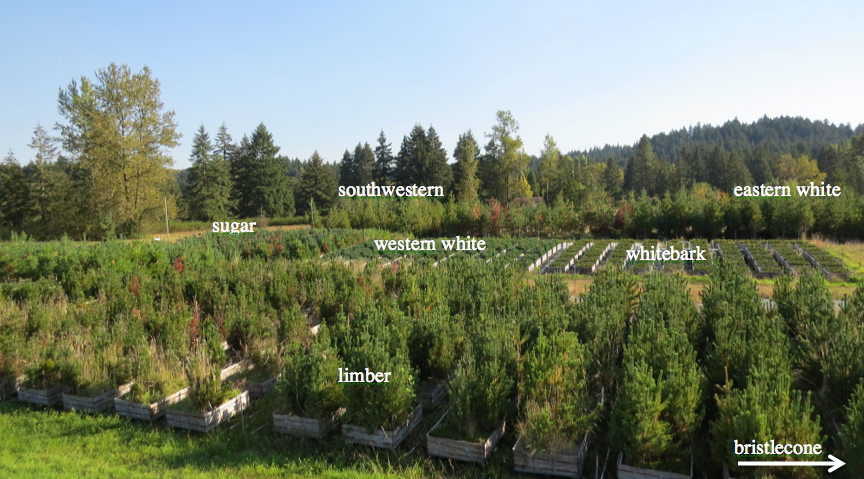 Lorinda Bullington comes from three generations of small-scale Montana loggers, or as her grandfather put it, "the first environmentalists.” Not wanting to leave this beautiful state, Lorinda attended the University of Montana, earning a B.S. in Microbiology in 2010. Family traditions inspired a love of forests and nature, and during her junior year of college, Lorinda began working at MPG North, studying microbial communities associated with Western white pine trees and how those microbes can influence tree health and deer browse in forest ecosystems.

After college, Lorinda continued this line of research, working full time at MPG Ranch. She experimentally inoculated plants with microbes, in the field, and in the greenhouse, to enhance ongoing restoration projects and learn more about plant-microbe interactions. This lead to follow up studies exploring microbial communities associated with five-needle pines in relation to tree physiology, genetics, and disease resistance. Through this research, Lorinda recently earned an M.I.S. degree at the University of Montana, focusing on plant molecular ecology. At MPG Ranch she is involved in both original research and bioinformatics, combining biology and computer science to better interpret molecular data. When not working, Lorinda enjoys going to the gym, gardening and getting outside.

By: Kate Stone and William Blake