In December of 2011, Raptor View Research Institute placed satellite transmitters on one adult male and one adult female golden eagle on the MPG Ranch. Both eagles spent the winter roaming the Bitterroot Valley. When spring arrived, they headed north. The male settled on a breeding territory approximately 1,500 miles away, in the Wrangell Mountains. The female headed farther north, settling on a nest approximately 2,000 miles away in the southern Brooks Range. After the breeding season, we anxiously watched their movements to see when and if they might head back to the Bitterroot Valley. Both eagles left their breeding territories in October, and made a leisurely journey south. They were both just north of the Canadian border during the last week of October. The eagles have since returned to the Bitterroot Valley, and have been within 50 miles (and as close as 5 miles) of their original capture location for the past two weeks. 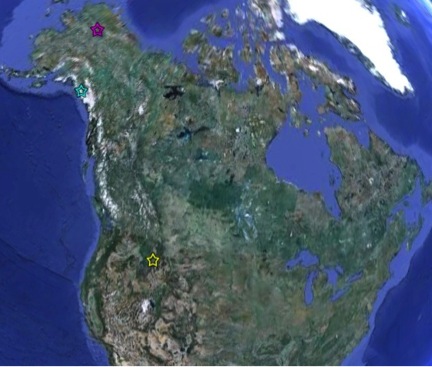 Breeding territories of the male (blue star) and female (purple star) golden eagle captured on the MPG Ranch in December of 2011. The gold star represents their capture location and approximate current location, almost a year later. 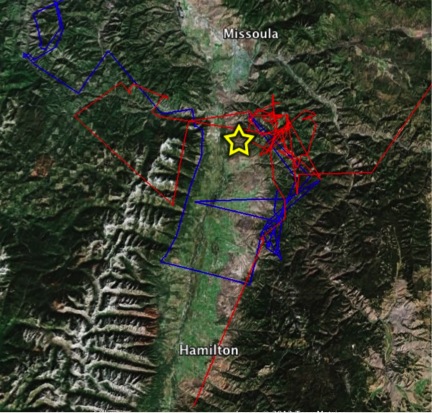 Movements of the golden eagle male (blue line) and female (red line) during November 2012, with the original 2011 capture location on the MPG Ranch marked by the gold star.