This iridescent blister beetle, Lytta nuttalli, stands out among dry grasses as it hurries along the ground. 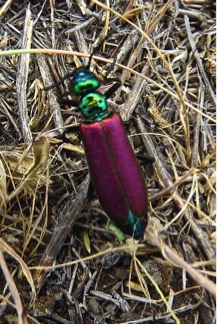 What’s in a name?

Blister beetles exhibit a behavior called “reflex bleeding.” After a disturbance, males release fluid from their leg joints. Similar to blood in humans, this fluid circulating inside insect bodies is called hemolymph. The hemolymph of blister beetles contains cantharidin, which is an irritant that can give blisters to unknowing offenders.

Despite its bad reputation among humans, this toxic hemolymph is prized in the insect world. The cantharidin-rich fluid is transferred from male blister beetles to females during mating, and it helps protect the eggs that result. When blister beetles die, other insects may even mine their bodies looking for this fluid. These scavengers may receive a defensive advantage from the toxin. In the same way, monarch butterflies eat toxin-laced milkweed plants that give them a taste that repels predators.

Blister beetles can be many shapes and colors, but they are typically elongated and mainly black or brown. You can find adult blister beetles feeding on plants, but their larvae are parasitic, either living off wild bees or grasshopper eggs.

Marshall, S. A. (2006) Insects: Their Natural History and Diversity : with a Photographic Guide to Insects of Eastern North America. Buffalo, N.Y.: Firefly Books.

Life Above and Below Ground