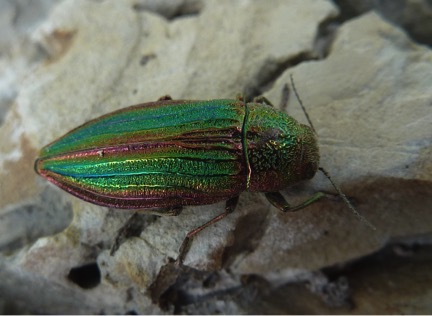 Buprestid bodies assume a long torpedo shape, capped by a wide prothorax and short head. The prothorax bears the beetle’s first pair of legs. In the case of this buprestid, looks a bit like a turtleneck sweater pulled up around its head. This large prothorax provides armor for beetles that spend much of their time unprotected on dying trees and other sunny exposed surfaces.

Adults feed mainly on foliage and lay their eggs on tree bark. Larvae bore into the roots and trunks of trees, where they transition to adulthood in 1-3 years. However, larvae can wait for years, even decades, until conditions for development are right.

Look and listen for these beetles on your next summer foray into Montana’s forests.

Marshall, S. A. (2006) Insects: Their Natural History and Diversity : with a Photographic Guide to Insects of Eastern North America. Buffalo, N.Y.: Firefly Books. 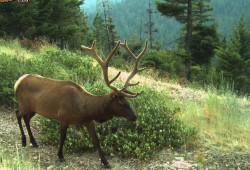