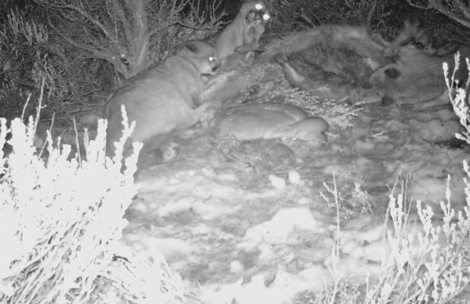 In late January MPG discovered a mountain lion kill on the west slope of Baldy Mountain. Alan Ramsey set up a camera at the location and captured revealing footage of lions feeding on the deer and later grooming. In the video still above, the mother lion eats with two young. A mother must kill every week or so to feed her young. This female lion brought down a mature mule deer buck.

Mountain lions stay with a kill and feed continuously until the food is gone. Unlike canines, they are meticulous in how they treat their kills. In December, Mike Sawaya described how mountain lions disembowel a kill and set the gut pile aside before they feed on the rest of the carcass. The lion’s teeth shear hair from the belly of their prey to aid in this process. Mountain lion kill sites are surprisingly tidy. They set the gut pile just to the side of the rest of the animal, and the carcass remains largely intact during feeding. These lions fed as a family unit without the competition often seen in canines. Canines spread their kill site over a large area as each member of the pack takes portions for personal consumption. 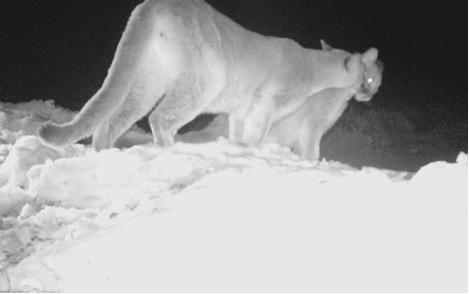 This video still shows a mother lion grooming her offspring after feeding. 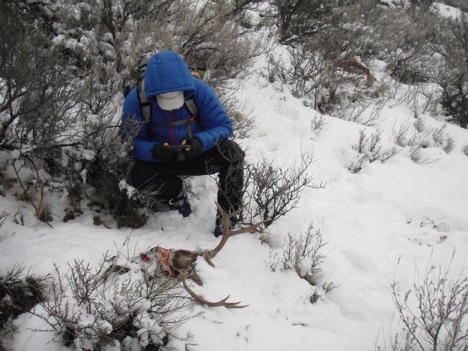 On January 30th, a volunteer and I investigated the kill site to look for hair and scat samples. It surprised me to discover the mother lion had taken a mature buck. The area she hunted has a healthy mule deer population, but the majority of the animals are does. 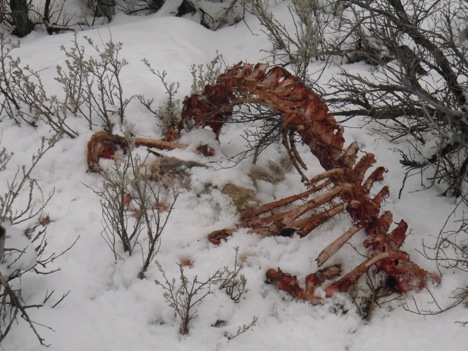 By the time we reached the site, several days after the kill, there was little left of the carcass. The lions were thorough in their work. Scavengers had begun to visit the site as evidenced by coyote and bird tracks.

Newly fallen snow covered much of the kill site. This made sample collection difficult. Thankfully, Kerr Rasmussen was able to collect a hair sample from nearby Baldy Draw a few days earlier. We will compare this sample to others to help identify individual lions and give MPG insight into population density on the ranch. 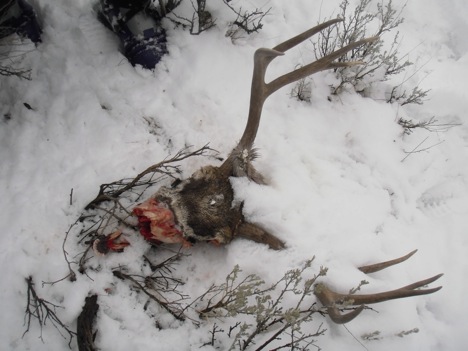 This photo shows what little remained of the deer’s skull.

On February 8th, Katharine Roggeveen and I returned to the site in an attempt to collect additional samples. The warm weather had melted off much of the snow at the site, and we were able to collect a scat sample. The abundance of mule deer was apparent by the grazing herd just upslope from our location. They paid us little mind as we went about our work. 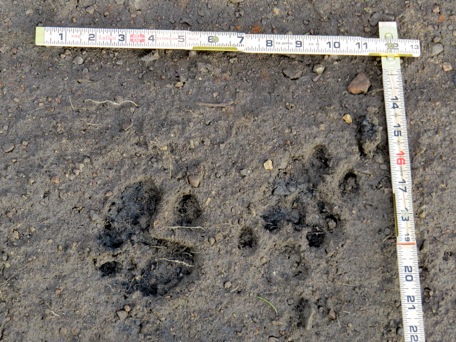 In the thawing road bed, we discovered multiple sets of fresh tracks. It would appear that the lions were still active in the area, even several weeks later.

This photo shows two different sets of tracks. The mother lion’s track is visible on the left, and her offspring’s tracks are visible on the right. Note the difference in size between a mature and a juvenile lion. 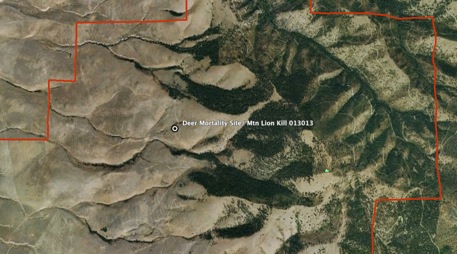 This map shows the location of the mountain lion kill site. The red line indicates the MPG Ranch boundary.