The second week of raptor surveys provided twice the raptors of last week. The beginning of the week was cold and rainy, but temperatures warmed enough to avoid snow, and winds turned favorable. By the end of the week, blue skies and temperatures in the mid-sixties accompanied south winds. Northern Harriers, American Kestrels, and Turkey Vultures began flying over. Accipiter numbers increased, with Cooper’s Hawks as the most common. Rough-legged and Red-tailed Hawk numbers remained high.

On March 26th we spotted a season high 74 birds. The Buteo count was substantial at 50. Species diversity increases daily as other raptors start migrating through the Bitterroot.

Our top non-raptor migrants include:

We also observed Canvasback and California Gull, new species for MPG. One Sandhill Crane was seen the 27th. 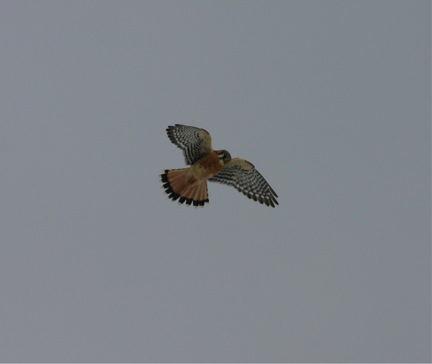 A male American Kestrel briefly hovers over the observation site before flying north (above).