A moist pacific cold front dominated the fourth week of spring raptor surveys. Record-breaking low temperatures and gusty winds from the north may have impacted the count. A day of respite came on the 12th. We counted 80 raptors on that day, tying our season high. Disappointing totals for the three days following were in the single digits. A slight increase in numbers on the last three days of the week occurred as a slow warming trend started.

All raptor numbers were unusually low this week. Historically, this week of April has been the peak of migration.

We counted three Swainson’s hawks this week, the first of the season. Turkey vultures and accipiter numbers were very low, but they did continue to trickle north. Non-raptor migrants were affected by the weather too. Snow Goose numbers dropped to 50. The only other species seen was the American white pelican (3). 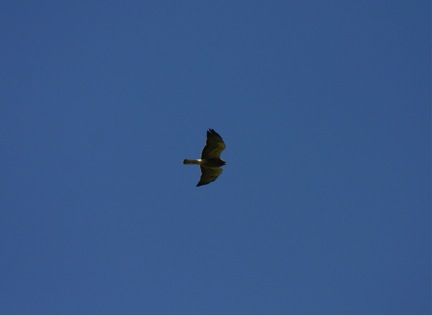 A Swainson’s hawk wings are two-tone underneath. There is a small, local, population in the Missoula valley.