The third week of spring raptor surveys started strong, with a season high of 80 birds. It ended on a lull, with daily totals in the low 20’s. Above average temperatures gave way to a gusty and persistent Pacific cold front. The front is forecast to bring cold and precipitation for another 4-6 days.

Despite the poor conditions we did see our first Osprey of the season. Turkey vulture and American kestrel numbers doubled. We saw the start of the Accipiter surge, with Sharp-shinned hawks battling strong winds. Eagle and Red-tailed hawk numbers were similar to last week, but Rough-legged hawks decreased.

Our top non-raptor migrants include: 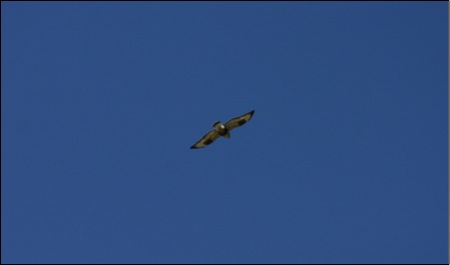 The dark carpal patches on the wing, and sub-terminal band on the tail, clearly distinguish a Rough-legged hawk.