Plants live in tight associations with microbes who colonize their roots and leaves and surrounding soil. Some microbes are harmful and cause disease while others are beneficial and aid in plant nutrient uptake, decomposition of organic materials, protection against pathogens, tolerance against drought and other stressors. Plants can influence microbial communities and vice versa with consequences for the growth of individual plants, the composition of plant communities, and entire ecosystems. In our work, we focus on three main aspects of plant-microbe interactions; 1) how they may aid or hinder plant invasions, 2) how their function changes across environmental gradients, and 3) how they may both cause and prevent disease in plants.
On MPG Ranch, three highly invasive weeds of contrasting lie history strategies (cheatgrass, knapweed and leafy spurge) co-occur with remnants of native plant vegetation. Using both observational and experimental approaches, we seek to understand how these weeds alter microbial communities and how this influence invasive success, ecosystem properties and restoration. We also collaborate with researchers from across the world to learn if plant-microbe interactions differ between native and invasive ranges and how this correlates with evolutionary shifts in plant genomes and biogeographical distribution of plant associated microbes.
Outcomes of plant-soil microbe interactions depend on the particular plant and fungal species and surrounding environmental conditions. To explore this context-dependency, we use high-throughput sequencing and stable and radioactive isotopes in surveys and experiments to determine if the proportion of fungal guilds (mutualistic mycorrhizal fungi and potential pathogens) change with water and nutrient availability and how these changes relate to plant growth. Because most research occurs in single locations, the generality of findings across locations that differ in environmental conditions is often unknown. To address this, MPG Ranch is part of two global research collaborations, Nutrient Network (https://nutnet.org) and DroughtNet (www.drought-net.org). In these experiments, all researchers apply nutrients, remove herbivores, expose plants to drought, and record responses in both plant and microbial communities using the same protocols, which allow for direct comparisons across sites.
The invasive fungal pathogen, Cronartium ribicola, causes the disease commonly known as blister rust in all nine white pine species native to the United States. As one of the only labs in the world to grow C. ribicola in culture, we perform tests of pathogen metabolism when exposed to compounds produced by other fungi found in white pine needles. Greenhouse experiments inoculating trees with these fungi, as well as beneficial ectomycorrhizal fungi, explore how we can improve tree growth and disease resistance. We also use isotopes and controlled field experiments to determine how blue-stain fungi carried by bark beetles can influence wood decomposition in forest ecosystems. As warming climates increase the frequency of bark beetle outbreaks worldwide, this research will help to better estimate future forest carbon storage and release.

Bee processing and identification for our 2014 bee collections at MPG are nearly complete. Among our bee specimens this year we observed a bilateral gynandromorph species of Halictus farinosus. Gynandromorphy is an infrequent phenomenon where an animal has both male and female characteristics. There have only been 113 recorded cases of gynandromorph bees and only 10 of them exhibited a full bilateral split, with one side composed entirely of male anatomy and the other side female anatomy. Gynandromorphy has been documented in only 3 species within the genus Halictus. 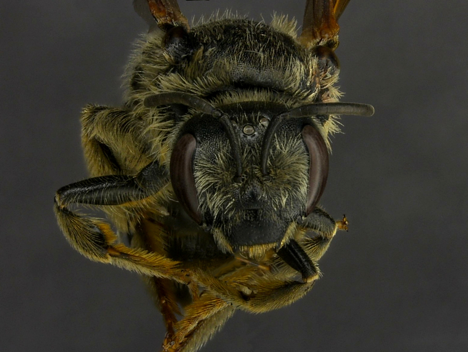 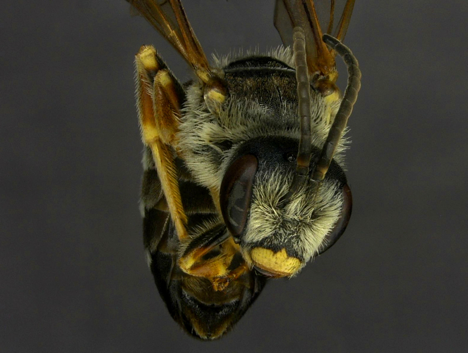 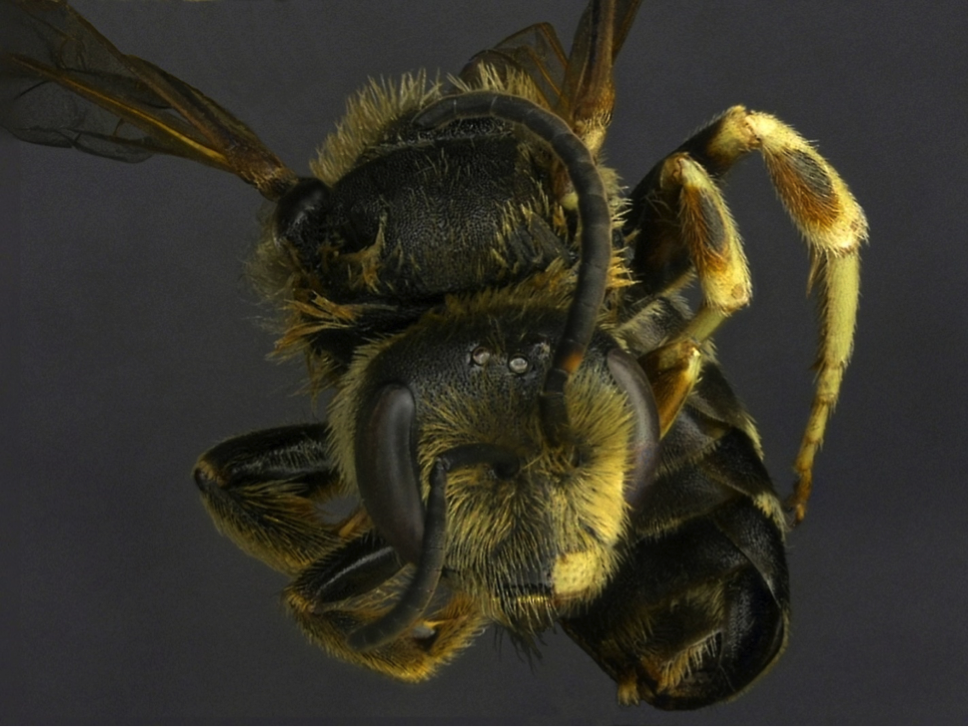 In the picture above you can see a distinct split down the middle of the bees’ face. The bee’s left side is male. Its face is hairier and the clypeus (kind of the upper lip of the bee) on that side is yellow. The bee’s left antenna is divided into 13 segments. The legs are yellow and do not have pollen collecting hairs. The bee’s right side is female. It has less hair on the face, the legs and clypeus are dark, it has pollen-collecting hairs on the legs, and there are 12 antennal segments. 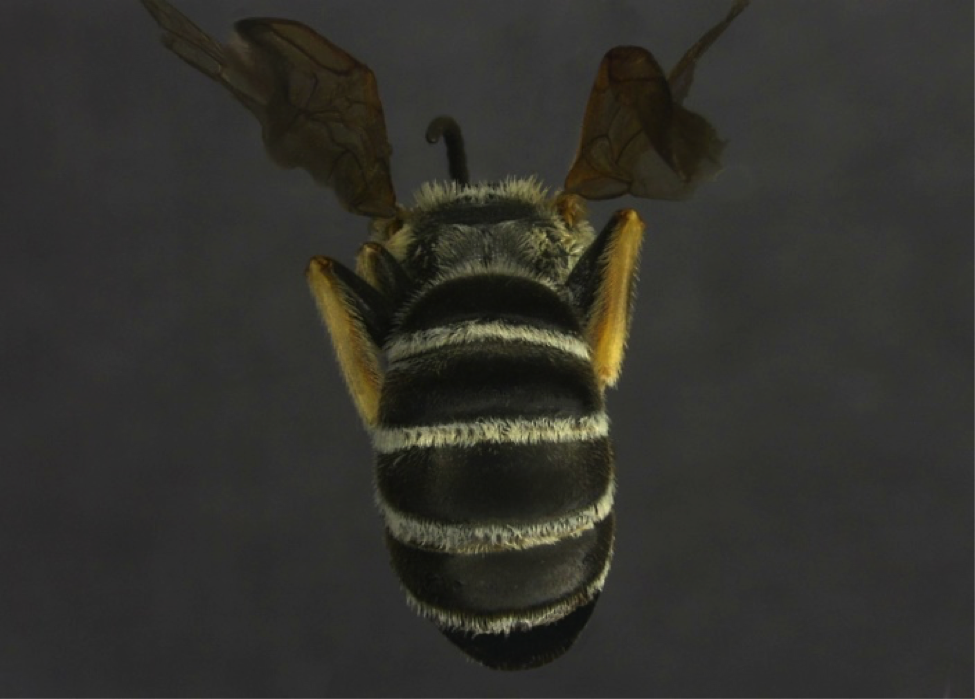 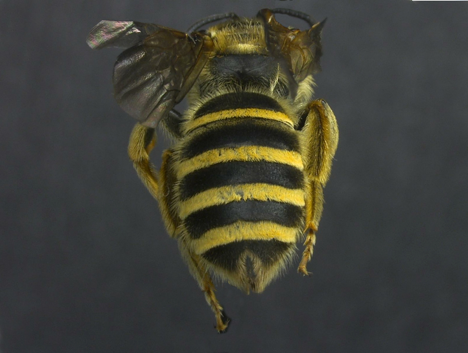 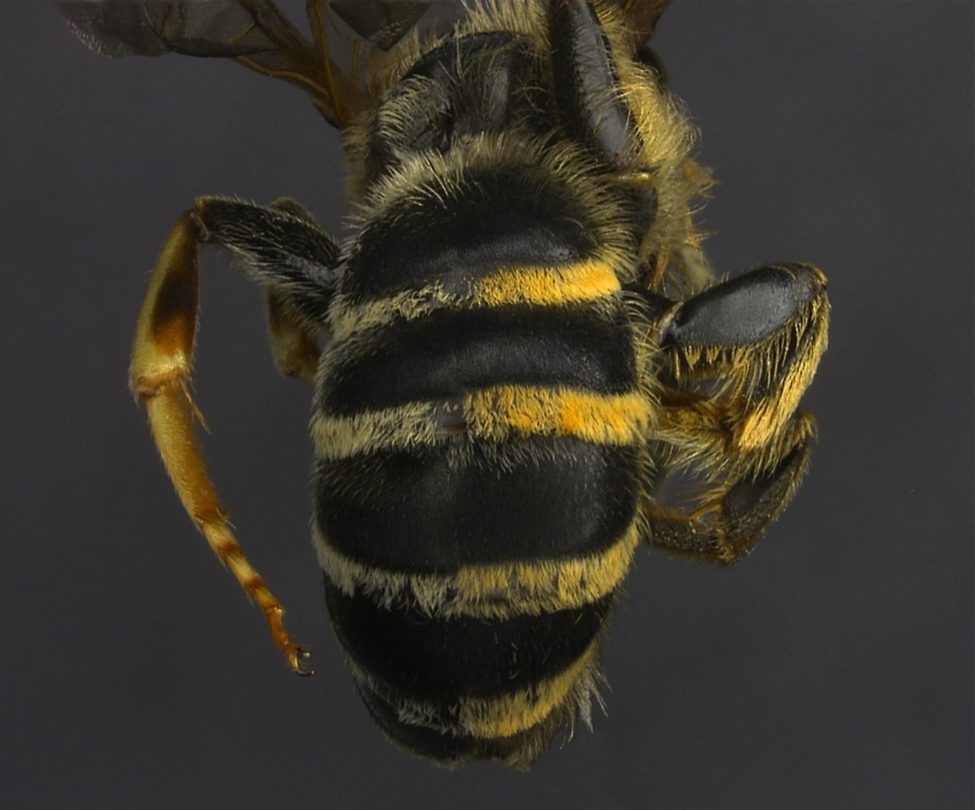 In the rear view picture of the gynandromorphy bee above, you can again see the leg coloration and hair features as well as a difference in the thickness of hair bands on the abdomen. The female side of the bee (right side of photo) has much thicker hair bands than the bee’s left side with the sparser hair bands of a male H. farinosus.