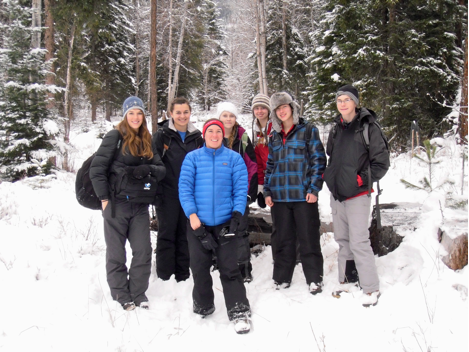 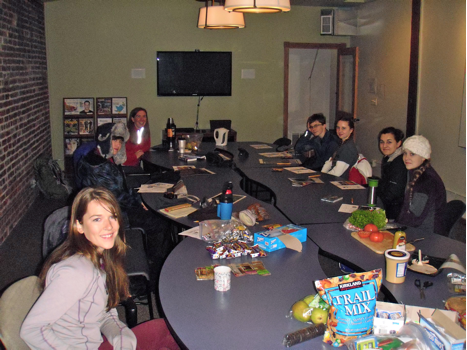 In the field, students learned the basics of winter ecology and reviewed track identification.

Snow conditions made tracking difficult. Fresh powder sat atop a layer of old snow. Many older tracks had filled in and were difficult to identify. New tracks, other than deer, were scarce.

Areas sheltered from the fresh snow, like under trees or along the creek, had some clearly identifiable tracks.

The group found a set of weasel tracks along the creek. We identified them as a mink due to their size. Mink tracks are almost twice the size of long-tailed weasel tracks. 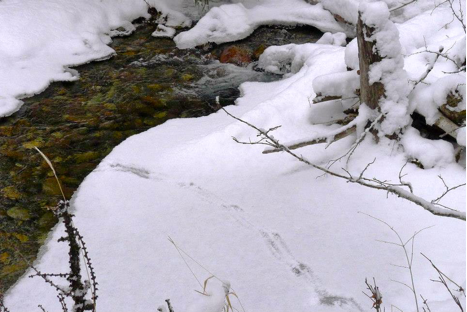 MPG North has a healthy population of snowshoe hares, and we saw several tracks throughout the forest. We were all surprised when we spotted the source of the tracks hiding in the brush. 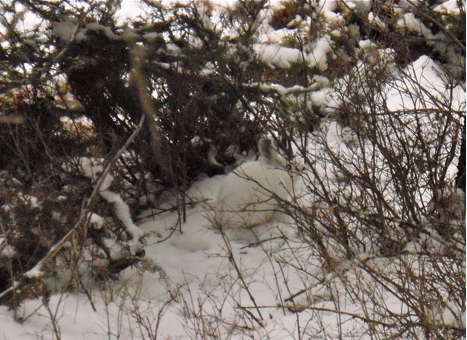 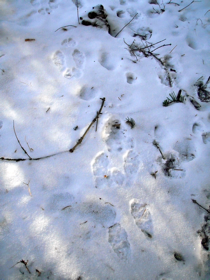 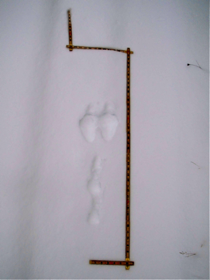 These photos show different snowshoe hare track patterns in different snow conditions. The picture on the left shows tracks of a slow hop through a thin layer of snow in thick forest. The picture on the right shows tracks of a full bound through deep snow in open terrain. The two hind feet land in front of the front feet. This is a classic example of the bounding gate of a snowshoe hare moving with speed. 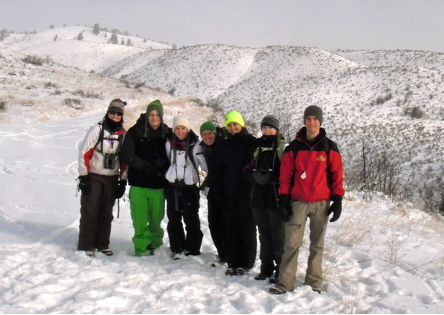 On January 13th, EPI brought a second alumni group of five students and two staff members to MPG Ranch. Our plan was to connect the mountain lion GPS track lines established by previous groups (see previous post Mountain Lion Tracking), but several days of measurable snowfall wiped the landscape clean. Mountain lions revisit hunting areas based on prey availability and prior success. We hoped for fresh cat tracks in the new snow, but we saw many other things instead.

The day began with a brief tour of the ranch. We drove to the north half of MPG and observed a grazing elk herd in Sheep Camp. The group marveled at the sight, but this was the day’s first of three elk sightings.

On our way to Whaley Draw, we stopped to look at some coyote tracks in the road and noticed a curious group of elk that popped up out of Tongue Creek. They stayed on the ridge for some time and then dropped back out of sight. We also observed two bald eagles and two golden eagles roosting in Lower Woodchuck trees. When we parked at the top of Whaley Draw, we saw a third elk herd bedded atop Upper Woodchuck. We hiked into Whaley Draw and saw tracks of a long-tailed weasel and numerous deer. As we climbed to the high ground east of Whaley Draw, we cut across the tracks of deer and elk. The Upper Woodchuck elk herd watched us switchback out of the drainage to the top. 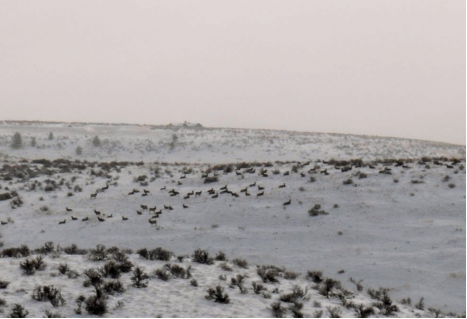 We divided the group to cover more ground. One team dropped into Last Draw and looped back to Whaley. The other team and I continued to the top of Whaley via the high ground. 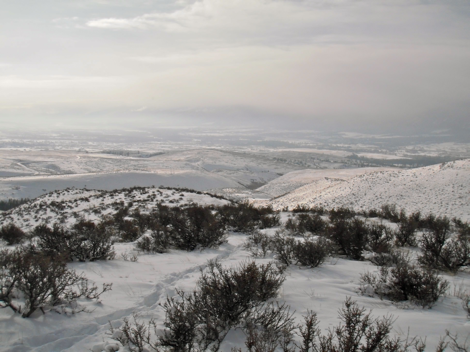 This photo is the view looking south from between Whaley and Last Draw. 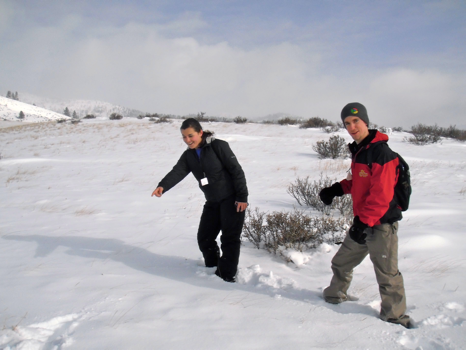 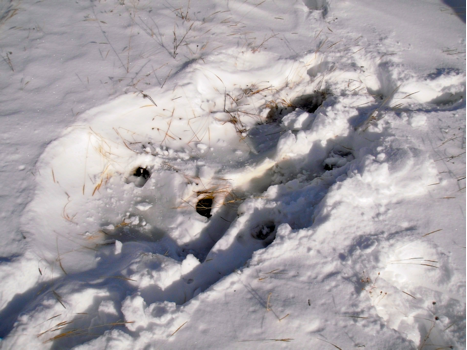 This photo shows an elk track in a bed site. The animal’s body heat softened the snow beneath, and when it stood up, its warm hoof pushed deeply into the snow. The track then froze solid. 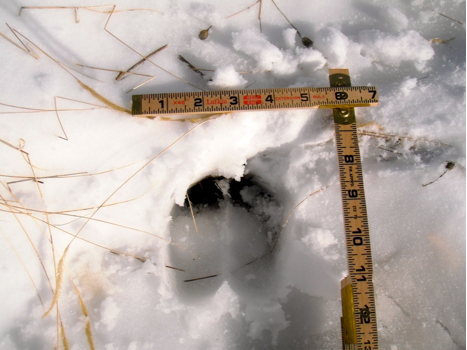 We left the high ground and dropped into the north end of Whaley Draw. There we found evidence of a weasel hunting its territory. Alan Ramsey, Mike Sawaya, and I saw a long-tailed weasel in this area on December 28th. The weasel had the drainage all to itself, and it had clearly been hunting. 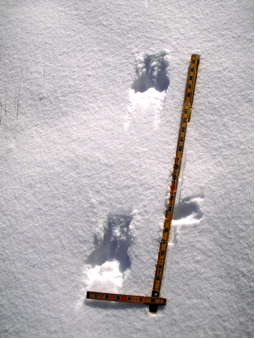 The photo above shows the leaps of a long-tailed weasel. There are about 24 inches between tracks. The photo below shows the same twin-print track pattern left as the weasel moved down the draw. 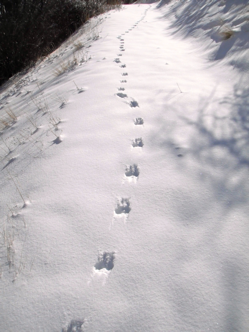 Three sets of long-tailed weasel tracks below are different ages. The top track is the freshest. The lowest track is the oldest, and it is nearly invisible. These tracks indicate that the weasel hunted this area over the last four days when fresh snow began to fall following a period of rain. 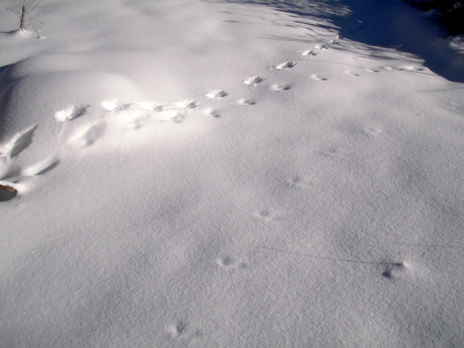 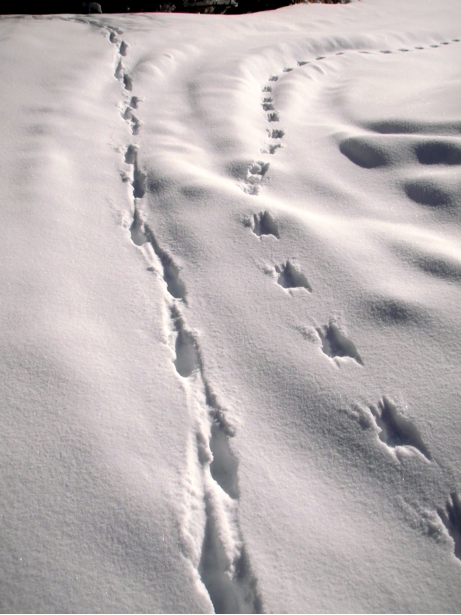 Long-tailed weasel tracks are on the right with coyote tracks on the left. 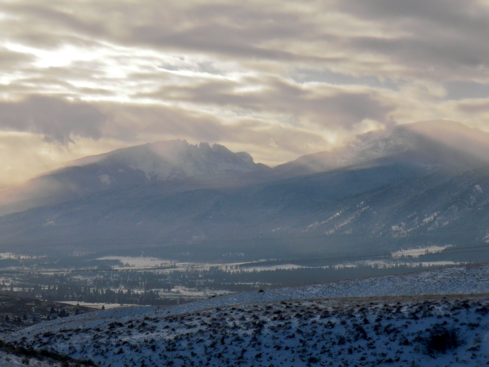 The two groups reunited at the south end of Whaley Draw, shared stories from our adventures, and called it a great day.